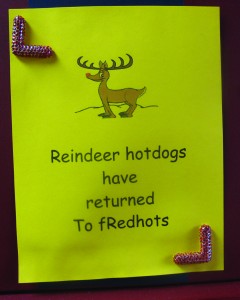 Prior to Hurricane Katrina, the word “debris” had one meaning in New Orleans. It was an iconic roast beef po-boy served at 401 Poydras Street at the corner of Tchoupitoulas at a spot called Mother’s. The lore is that a customer asked original owner Simon Landry to add the bits of roast beef that had fallen into the gravy while Landry was carving slices for the customer’s sandwich to his bun. Landry allegedly replied “You mean some of the debris?”

These days the sandwich is so popular, lines at Mother’s make the weekend queue at Hot Doug’s look like a women’s bathroom line at Augusta National Golf Club. And God help you if you stop by in the middle of Jazzfest, as I did, only to wait an hour and a half for a table. Ravenous, and never one to turn down pork, I opted for Mother’s other iconic sandwich, the Ferdi, which is basically a debris with ham on top. Beef strands blanketed in salty pork fat is a magnificent combo. As with so many things from that trip, I’d longed for a Chicago version of the sandwich to keep me inspired in between trips to the Big Easy.

Our Italian beef is certainly a close cousin of the debris, but it’s much leaner and the shaved sheets of beef don’t quite resemble the tender shards found at Mother’s. Enter Fred Markoff, owner of suburban Glenview’s fRedhots and Fries. Markoff, unlike most of the corner dog stands in Chicago, makes his own Italian beef and gravy. He found after he roasted off a side of beef, he was left with a sediment of beef bits and veg seasoned by the gravy. For a while, he ate what he could as a kitchen snack and chucked the rest. Then he decided to throw it up as a sandwich on his regular menu.

Though they had the debris and though fRedhot’s has been open for a couple of years, I avoided it out of a weird modified brand of locavorism. In reality it was really a mix of misguided suburban xenophobia and stubborn loyalty. You see, Markoff just happened to sell wild game sausages (reindeer, elk) topped with gourmet cheeses and condiments. He reminded me of a certain favorite proprietor, aka  of Hot Doug’s.

But then my microwave blew up. I was sitting on my couch when I heard a pop and then a persistent hum. I live in a West Loop loft prone to carryover noise from the neighbors, and thought the sound was coming from upstairs. When it didn’t go away, I walked around the house until I smelled an acrid tang coming from the microwave. Scarily, the hum continued with the door closed. It took me a few minutes to realize I could shut the thing off by pulling the power cord out from the wall, giving me ample time to run a bunch of radiation exposure scenarios and wonder whether my future offspring might have tentacles. Once the thing was off, I decided to go all Laura Ingalls Wilder and rough it for the next six weeks sans microwave. Unfortunately, my wife does not share my enthusiasm for cooking like an ancient prairie dweller. Longtime readers will also know I have an unhealthy obsession with Hot Pockets of which the greatest virtue is a two-minute microwave cooking time.

So with the jig up, I headed to appliance Disneyland, aka Abt appliances in Glenview (they have Vegas-like fountains in their lobby), to pick out a replacement. But, as with most trips, this particular jaunt was masquerading as a sideline to my occupation for sniffing out good food. Put another way, even world-class appliance-shopping in Glenview is really just an excuse to eat. I was afraid if I didn’t have a spot planned ahead, I’d end up choking to death on a riblet in a misguided hunger-induced trip to Applebee’s. After some research I settled on fRedhots and Fries.

So, thanks to an appliance mishap, I got a shot at Markoff’s debris. It’s not anything like Mother’s. It’s better. Mother’s is a touch sinewy and features occasional gristle or fat. Markoff’s version is the very essence of Italian beef, a pure surface-area affair made up of thousands of tiny beef chunks soaked in gravy, seasoning and studded with rich veggie bits. Throw some giardinara on top and I’m not sure you’ll want a regular Italian beef anymore.

Like the debris, pretty much everything here is good. The merguez (lamb sausage) features a satisfying richness cut by refreshing sweet-mint pesto. Even the condiments on your basic dog are inspired: the onion is fresh, not soggy, and is diced to the same size as and thus doesn’t overwhelm the relish like at other spots. The sweet potato fries, thick orange planks dusted in maple-cinnamon sugar, are the best example of the form I’ve had locally. And don’t tell Doug Sohn, but the regular frites, which come with your choice of dipping sauce including garlic or “pumpkin pie” aioli, are just as good, if not better, than the awesome spuds found at Hot Doug’s.