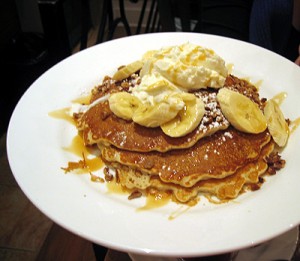 Those who might bemoan the ebb of old-fashioned Chicago patronage need only look at Greektown to change their mind. The Near West Side neighborhood is one where waiters still beget restaurateurs who beget waiters who beget more restaurateurs, a place where family and immigration isn’t a random mingling of bloodlines, but a concrete strategy in the business plan. Meli Café (301 South Halsted), a fantastic breakfast and lunch spot, and the newest addition to the Halsted strip, serves as the perfect business case.

Owner Nikos Karabelas, a barrel-chested dark-haired man, came from Athens in 1973 to work as a dishwasher, detoured back to Greece and landed back as a waiter at the Parthenon working for owner Chris Liakouras, the inventor of flaming saganaki cheese, who himself was once a waiter at the now-defunct Diana’s Opaa. After saving money and teaming up with partner John Theoharis, Karabelas launched Nine Muses across the street from the Parthenon in 1990, where they celebrated their seventeenth anniversary last weekend.

Nine Muses eschewed the Greek-restaurant stereotype of white tablecloths, country-club-like wainscoted dining rooms and murals of Grecian ruins in favor of modern deco accents and a Euro dance-hall feel. It was a place more emblematic of the neighborhood’s young trendoids than the Ya Ya and Pappous set.

Building on that success, Karabelas and Theoharis launched Meli last September. Meli, like Nine Muses, is also a departure, where the only gyro in sight is rotating on a spit in the Parthenon window across the street. As Karabelas says, “I was thinking about what the neighborhood is lacking. We might have Greek owners, but it doesn’t have a Greek breakfast.”

And of course family is involved. Karabelas’ nephew Gus Deoudes, an ITT grad, manages the dining room, a golden hearth of dark wood, copper accents and yellow walls that glow like the Mediterranean sun. Homey signs that sport aphorisms like “Life is not measured by the number of breaths we take, but by the moments that take our breath away” line the walls.

In its previous incarnation, under different ownership, Meli used to be Zorba’s, a dingy diner, where the grunginess is what really took your breath away. At Meli, the grunge has been replaced with clean-tasting inspired breakfast, the handiwork of 29-year-old Chicago Cooking and Hospitality Institute graduate Frank Georgacopoulos. While Georgacopoulos isn’t family, he grew up in the restaurant business manning the kitchens at family-style dining spots in the Chicago suburbs. Georgacopoulos says of his new occupation, “I was the big fish in the little pond. Now I’m the small fish and I’ll work my way up.”

There’s no flopping like a fish in this kitchen. As the pass lines up with a row of tickets on a busy Sunday morning, there’s a silent dance between knowing cooks. Georgacopoulus says the cooks refer to this harmony amidst the rush as “vibration” and says, “You need to a little bit of craziness, a little ruckus, or your day’s not complete.”

The precision is the end result of two years of meticulous planning. Before they opened, Georgacopoulos says he and Karabelas blind-tested ten different eggs including standard, organic and cage-free versions until they settled on an Illinois producer, Phil’s Cage Free, which are delivered three times a week. He says, “Some people will say, eggs are eggs, but there is a difference. Standard over-easy yolks tend to break.”

You can taste the difference. Breakfast can be a vast wasteland of impossibly long lines ending in arid omelettes, but at Meli, the frittatas are light airy affairs. Freshness pervades everything they do. There’s no foil-lined packets of jam or ribbed plastic containers of cream. They skip trans-fat-laden vegetable oils and cook only in clarified butter, and homemade preserves are derived from fresh strawberries. Georgacopoulos gets in everyday at 4:45am to whip up scratch batters, and pancakes moist from an infusion of ripe bananas are drizzled with a ribbon of gooey caramel and rich maple syrup.

Meli is the Greek word for honey, and the restaurant uses an imported Thyme honey in everything from the challah French toast to the sweet butter which tops perfectly toasted English muffins. Steak Benedict is a buttery fillet of beef topped with a bulbous poached egg and the lemony zing of drizzled hollandaise sauce that’s whipped up every hour rather than coagulating all morning in a steam bath.

Orange juice is freshly squeezed by an automated Rube Goldberg-like Zumo machine which serves as mechanical entertainment for the dining room, and Lavazza coffee is redolent with the oils of freshly ground beans.

Georgacopoulos and Karabelas say they set out to be a destination restaurant for phenomenal breakfast and lunch, and hope to expand the concept to other neighborhoods. But if you don’t live in the West Loop, you might not want to wait for them to drop anchor in your neighborhood, and instead make Meli Cafe your weekend breakfast destination.