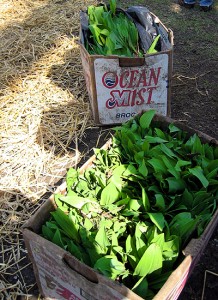 Wild leeks are kind of like the agricultural version of crystal meth. That’s not to say if you eat a handful of the green, leafy, white-bulbed veg that tastes like a cross between spring onion and garlic you’ll end up tweaked-out and toothless, selling your children in the Wal-Mart parking lot. But then again I’ve never smoked or snorted them. Maybe if you throw a couple of bulbs in some rolling papers and spark up, you’ll commune with the ghost of Julia Child and a Rockette-like dance troupe of truffle-stuffed chickens?

What I do know is that wild leeks, like meth dens, pop up unchecked, usually in late March and early April, carpeting forested rural landscapes, and as a culinary signpost of impending spring bounty, they’re often farmed with the vigor of a hovering drug user.

Like the meth labs that give off a stench from drug-conversion byproducts, rampant eaters of wild leeks have also been known to sport a hillbilly bouquet, a garlicky perfume that oozes from the pores.

Wild leeks even have their own street name—ramps. As one version has it, the English folk name “ramson” (son of Ram), referred to the plant’s appearance during the sign of Aries, March 20 to April 20, on the zodiac calendar.

Then there’s the addiction. Ramps are delicious. Sautéed, they are the perfect nest for a hunk of grilled meat. My first pusher, Chef Ryan Poli, formerly of Butter, served them up amidst a spring ragout of asparagus, fiddlehead ferns and morel mushrooms drizzled with warm veal broth.

Eating them in Chicago is appropriate, as the vegetable is our namesake. Chicago originates from the Potawatomi Indian word “Checagou,” which means “wild onions” or “skunk.” The area was so named because of the smell of rotting wild leeks that used to cover the marshland located at the confluence of the Chicago River and Lake Michigan.

Suppliers to local restaurants like Blackbird, Frontera Grill, Vie, 312 Chicago and Custom House are Marty and Kris Travis of Spence Farm, the local ramp kingpins. They began digging ramps in the twenty-six-acre woods behind their farm because they were choking out wildflowers. Only later did the Travises discover that the operation could be lucrative. Now they harvest more than 4,000 pounds, which garner about ten dollars per pound wholesale.

For the last three years, the Travises have hosted an annual spring ramp dig for local chefs and foodies at their farm in Livingston County, Illinois. In need of a fix, I accepted an invitation to join Paul Virant and his Vie restaurant crew on this year’s dig. The farm is located a couple hours out of Chicago, and my driving companions were Jimmy McFarland, a Vie server, and Dan Feldman, aka “Cheney” (as in Dick Cheney, because the Vie crew thought he looked like a young Republican), Vie’s assistant pastry chef.

While discussing a new dessert involving waffles and buttermilk ice cream, Feldman missed an exit, and we arrived a bit late to the farm, a collection of barns, vintage buildings, the family cemetery and a yellow-sided American four square-style farmhouse. As we hit the dig site, Vie chef Paul Virant, clad in a black baseball cap with the Gnarly Head wine logo, emerged from the mucky forest with a cardboard box full of ramps.

In Chicago, there are a lot of photo op chefs, guys who’ve won lots of awards, who are resting on those laurels, parading weekly in the press, clamoring about seasonality and locality, all the while buying their stuff from international conglomerates. In contrast, Virant, who was just named a 2007 “best new chef” by Food & Wine magazine, preserves seasonal fruits and vegetables, makes his own vinegar, house-cures meats, forages for mushrooms and makes sausage with his grandfather’s vintage sausage stuffer. Virant is the one-room schoolhouse of old-school chefs.

After a bustling Saturday night at Vie, he could be sleeping in or relaxing at home, but instead he’s out digging for ramps with his wife and two boys. This dedication makes Vie (4471 Lawn Avenue, Western Springs) the perfect local spot to try out wild leeks for the first time. Currently, Virant features them wood-grilled in a ragout of burgundy snails with fava beans and organic crème fraiche, or alongside wood-grilled domestic lamb loin chops. The menu is always evolving, and it’s likely the dishes won’t be the same if you go, but the ramps should be there.

If you want to try wild leeks at home, you can usually find them at Whole Foods or Fox and Obel, or order them online at earthy.com. Once you procure them, try making a hearty Potato Leek Stew (see recipe below). Slurp down a bowl and throw back a pint of Guinness—there’s no better way to honor the springtime.

Method:
In a large skillet, fry bacon until crispy; set bacon aside. Add the ramps and potatoes to the skillet; fry on medium-low heat until ramps are tender. Sprinkle the mixture with flour; stir until flour is absorbed. Stir in chicken broth; simmer until potatoes are tender. Mash some, but not all of the potatoes with the back of a wooden spoon. This thickens the soup, but preserves the texture by keeping some of potatoes intact. Stir in the heavy cream, heat through, then add salt and pepper to taste. Finally dash with a spritz of fresh lemon before serving.

Enhancements: Grate a bit of Parmigiano Reggiano or add a few drops of white truffle oil to really kick things up