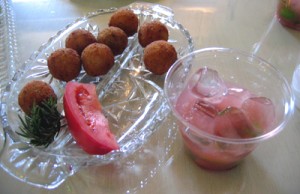 It’s often said that loose women are trying to replace the memory of their absent fathers by sleeping with a trove of men. This might explain some things.

While I was growing up, my father was a blue-collar machinist in the rough and tumble tool-and-die world. He was a young father, low on the seniority pole in the union hierarchy and, as a result, he was often a second or third shifter, which meant he either slept through or was gone for dinner. Henceforth, there was never any real family gathering during the week. (Weekends, when he’d share a nip of his favorite Cabernet Sauvignon with me, were another story.) My mother, an excellent cook, tried to keep my brother and I together with her excursions into Ladies Home Journal recipes like chicken cacciatore, but there was often the intrusion of sports or after-school activities.

If we were lucky, a couple times a week, the three of us would honor a 4:30pm reservation at our brown faux-wood-laminate dinner table before darting off. My brother still has this table in the “man den” that is his garage, and when I head back to the suburbs of Detroit to visit, one glimpse reminds me of the impossible number of meals composed solely of Fruit Roll-Ups that we crammed away before soccer practice.

As a union guy my father made a decent living, which meant I grew up on the edges of the right side of the tracks. This meant that most of my friend’s parents were white-collar professionals always home for dinner. Given the chance to join these outside gatherings, I’d often forsake my own sad threesome. Real family dinner, I soon learned, was of course also an opportunity to grill your children about school, and ever the laconic adolescent, I was thrilled to have avoided such moments in my own house. Dinner was also, at my friend John’s house, a scary amalgamation of freaky diet fads, where the whole family once ate whole grapefruit dusted with Nutrasweet. Maybe I wasn’t really missing anything.

Yet reviewing the wisdom of loose women, I’ve come to believe that my adult obsession with entertaining and cooking may have something to do with my own absent father and latent jealousy of childhood friends. I’ve always yearned for an Algonquin Round Table of sorts, a fellowship of witty repartee, flowing drinks and, in my dreams, a personal audience with Dorothy Parker. This never-ending quest recently led me to a gathering at the home of Brazilian caterer Jorgina Pereira.

Every Sunday afternoon, Pereira, a noted local caterer, opens up her three-flat for a Brazilian-style brunch. Pereira, who originally hails from Rio de Janeiro, is a former IT guru who specialized in Unix and mainframe work. She worked for Montgomery Ward and Borg Warner. When Borg moved to Detroit, she became exasperated with having to switch jobs again, and decided to give up corporate America to cook.

She grew up with the smells and tastes of her godmother’s culinary alchemy. Still, she never really cooked. Living in America, she yearned for the tastes of her native country and began experimenting, relying on her sense memory to guide her way. This sounds like magical realism fare from a Gabriel Garcia Marquez novel, but there’s a precedent for such things. When I once spoke with Madhur Jaffrey, the famous doyenne of Indian cooking, she said she relied on the memory of her mother’s food to learn to cook while studying acting in London.

The proof of course is in the Feijoada, the national dish of Brazil, an amalgamation of rice, black beans and various pork products, and also the centerpiece of Pereira’s brunch.

Upon arrival there was a respite in Pereira’s salon, a Liberace-like palace of alabaster paint and green and white hand-carved wooden furniture which was once part of a set from, according to Pereira, “some Mafioso movie.” On this occasion, I was joined by a couple of Brazilian ex-pats and a structural engineer and sculptor. All business is word-of-mouth, and on any given week, there could be a handful of neighborhood folks or a rambunctious bunch of French aerospace engineers.

The brunch is BYOB, and after washing some tasty deep-fried artichoke empanadas and stuffed olives down with rhubarb caipirinhas, we retired to the first level for the main buffet.

Pereira’s Feijoada is magnificent, coupled with three types of meat, including rich, smoky pork hocks. Accompaniments included tangy Cassava flour-cheese puffs, cognac-marinated mushrooms, braised fennel and baked codfish loin, which was eminently flaky. The Brazilian fare is available each week, with other dishes like the mushrooms changing according to Perreira’s inventions. Perreria says that as an IT consultant, she always had to stay one step ahead of the customer, anticipating their project needs, and that now as a chef she does the same thing, creating dishes her customers love, but that they didn’t know they needed. Indeed, for a little while, my own thirst for a rich family meal was finally slaked.

If you want to check out this weekly gathering for yourself, and you should, check out sinhaelegantcuisine.com for more details.