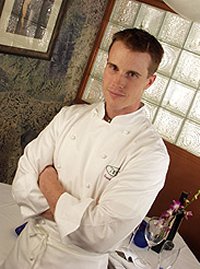 Grant Achatz is the culinary Barack Obama. If you stacked all the press that positively chronicles his rise, you’d have a glossy skyscraper of Sears Tower proportions. Where his peers, evolutionary gastronomists like Homaro Cantu at Moto, have endured scathing criticism, Achatz has been a Teflon Don. The worst thing anyone has written was when GQ’s Alan Richman said Achatz’s food was “a little too safe.”

Regarding Achatz’s cuisine, that’s typical Richman. Richman, who once lambasted New Orleans cuisine in the aftermath of Hurricane Katrina, is fond of making arguments that’ll play in Peoria whether he believes them or not. Regarding Achatz’s personality, Richman was on to something.

Achatz is one of the most deliberate folks I’ve met. He’s got a thoughtful answer to every question, and he’s a philosopher as much as a cook. He’ll turn the abstract wall art at Alinea into a visual metaphor for his cooking style at the drop of a fork.
While most college kids were finishing their last keg stands, Achatz had already graduated from the Culinary Institute of America and worked at Charlie Trotter’s and the French Laundry. When he was labeled a molecular gastronomist, he knew that being dubbed a food scientist might distance him as a chef in an ivory kitchen, and he smartly rejected the label.

Given this background, I was surprised to see the cover of last Sunday’s Chicago Tribune Magazine.  There beaming in black and white ring-a-ding-ding rat-pack glory is Achatz with ruffled hair, in loosened black tie, his smiling chin exaggerated into Jay Leno like proportions by lens distortion. It’s definitely a carefree playboy side of Achatz we’ve never seen. Next to Achatz in the photo is a frizzy-haired, doe-eyed, mascara-slathered supermodel leaning over the dining table. She’s looking at the camera with a full-on quivering lower lip so plump it reminds one of Angelina Jolie after a few minutes in an angry beehive.  And as my father who was in town this weekend said, (he’s also one of the most religious people I know), “It looks like she’s angry that someone just interrupted her while she was coming up from under the dining table.” To cap it off, the sub-headline on the cover dubs Grant Achatz as a “Haute cuisine hottie.”

Normally, I probably wouldn’t blink at the cover, as I think people are too serious about food and they need to lighten up in the spirit of growing and learning as tasters and cooks. And on the surface this was just a garden variety shot, the kind of ego-driven photography spurred by high budgets and overactive stylists (Achatz’s socks matched the chair fabric in the picture) that you see every day in fashion magazines.

But this was Achatz, the choir boy of what is sometimes a drug-fueled world. Despite the fact that Alinea is very expensive, I still think of Achatz as a democratic chef who believes in improving people’s lives through food. The Tribune cover seemed contrary to that.

Also, the cover undermined what was a well-written feature, documenting the most memorable meals of some of Chicago’s culinary leaders, with witless glamour. The cover appealed to the crowd that equates the cost of a meal with the quality of a meal, the same kind of folks who see Alinea got four stars, immediately make reservations and then wonder why they can’t order a side salad. It sent the message that the best meal ever should involve vacuous models at the expense of good food.
Achatz doesn’t have control over the editorial decision to call him a “hottie,” so I contacted the Tribune editors to ask about the decision, but they did not respond by press time. I told them that I thought the headline trivialized Achatz’s craftsmanship by reducing him to a pin-up, and that if they ran the same photo and headline with a female chef, people might be up in arms citing blatant sexism.

I thought Achatz had control over whether he agreed to the shots in the magazine, so I asked him about it. He was in the middle of a house move, but he did mention my query to his publicist Jennifer Galdes, who reiterated that there should be no question where Achatz’s heart is. She said, “Grant works as hard as any chef, and spends an incredible amount of time in his kitchens.”
In the last year, I’ve seen him de-stemming rosemary and separating seeds from fruit during afternoon prep. I suppose he’s entitled to have fun, or at least appear like he’s having fun. After all, magazines, as a local editor recently told me, are aspirational.

In the end though, for Chicagoans who care about food, I think the Trib went for the sexy cover to sell issues. Now that we’re no longer the second city of cuisine, we should expect more from our journalists. I’m willing to bet most of the serious food enthusiasts in this town regard Amanda Hesser or Mark Bittman and the rest of the New York Times food crew as a better and more informative read than those at our local dailies. This will continue as long as editors send the message that glamour is more important than the idea of cooking as a craft and dining as a cultural gathering point.