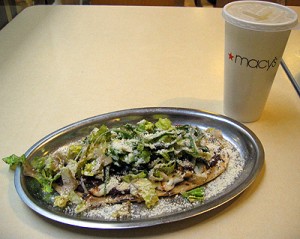 What if you found out your girlfriend slept with your best friend five minutes before your first reservation at Charlie Trotters? Assuming you didn’t jump off one of Chicago’s movable-span bridges or cancel the reservation and go kick your friend’s ass instead, no matter how much caviar topped your third-course terrine, I bet it would probably be one of the worst meals of your life.

There’s a common wisdom that some negative food reviews have nothing to do with the food, rather they reflect something about the mental state of the reviewer during the meal. “Check Please!” hostess Alpana Singh once told me a story about how sometimes the Everest team would read angry food reviews on Tribune’s Metromix and they could pinpoint the review to a guy who’d just been in a car accident before his meal.

So, this weekend, as I was reading a thread on local food board LTHforum.com regarding Frontera Grill’s recent nod as “Outstanding Restaurant of the Year” from the James Beard Foundation, which was filled with all kinds of vitriol from labeling chef and owner Rick Bayless as a sellout to Frontera as “highly overrated,” I wondered who pissed on these posters’ quesadillas.
Bayless, a 53-year-old ageless wonder who’s ripped like a Men’s Health cover model from his regular power yoga routines, doesn’t need me to get his back. But in January, I made a call for Chicago’s top chefs to offer high-quality eats at a more affordable price in this space, and Bayless is really the only one of the big chefs that has done this.

Frontera Fresco, located on the seventh floor of Macy’s, might be the most important development in high-quality, quick-service food in Chicago. Posters in the thread questioned his integrity precisely because of this move. They didn’t particularly elaborate on their concerns, though my speculation is they see Fresco as an exercise in crass commerce.

The reality is that Frontera Fresco is one of the only spots in the country where you can find well-crafted, fresh-griddled masa flatbreads, topped with all-natural meats, aged Mexican cheeses and high-quality roasted vegetables cooked to order all for about seven bucks. Furthermore, except for Hot Doug’s, I can’t remember the last time I saw so many fashionistas, hipsters, grandmas, children, Caucasians, African Americans, Asians and Latinos all bellying up to the same counter.

Some of the posters didn’t see Frontera Grill as being that different from the many high-quality Mexican restaurants in Chicago. While it’s true that there’s been an increase in regionally focused mid-level-priced well-crafted Mexican food, it’s precisely because twenty-five years ago Bayless took a gamble when there was no such thing.

After having interviewed almost every haute chef in the city, as well as chefs at many family oriented and ethnic joints in Chicago, I can say without a doubt, when you consider the grant program from its farmer’s foundation, there isn’t any kitchen in this city as committed to organic, local and sustainably farmed ingredients as Frontera. There are a surprising number of hotshot local chefs who show up at the markets for their photo-op trips, but their restaurant larder is filled with rows of Sysco or other commercial-grade food-service products.

The final criticism of Bayless leveled on the board was that Frontera doesn’t take reservations for small parties. This of course is one of his most democratic moves, ensuring that anyone with patience and foresight can score a meal. This ensures rabid foodies can’t hoard reservations ahead of time or rich folks can’t commandeer tables for weeks on end.

The biggest issue I have with the thread is that these accusations are submitted by folks named “Gypsyboy” and “dddane.” Like him or not, you know who Phil Vettel is and who he works for. The nature of public Internet forums is that people can hide behind e-monikers and badmouth chefs, which, in a forum like LTH, a significant local tastemaker, has consequences. Certainly Bayless can withstand baseless insults, but some small restauranteurs cannot. Folks who choose to go negative have a responsibility to use their real names, just as any journalist would.  I’m an occasional poster to the forum, and I added a tagline with my real name almost six months ago, because I believe, even in an informal public space, you must be accountable.
Speaking of regional Mexican cuisine and value, I had a chance to pop in to Mundial Cocina Mestiza in Pilsen (1640 West 18th) a few weeks ago. A recent article in Time Out Chicago suggested they have been struggling during the week.  The handiwork of husband and wife Katie and Eusebio Garcia, everything from the Chiles en Nogada (roast poblano peppers stuffed with tender pork and beef mixed with sweet fruit) to the earthy huitlacoche quesadillas was spot on. Best of all, it’s BYOB, and if you’re lucky, you’ll score one of their Dale Earnhardt Jr.-logo ice buckets to chill your surplus Sauvignon Blanc. Of course some of those folks on the Frontera thread probably wouldn’t settle for anything less than a Baccarat crystal decanter.