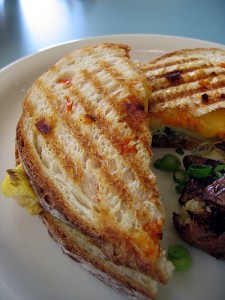 “I don’t care if my tomato was raised in a lab or some hippie’s backyard. I don’t even care if it causes the occasional tumor in lab rats. I only care that it’s the best-tasting damn tomato available.”—Anthony Bourdain, Travel Channel TV host and bad boy foodie

You expect hyperbole from a guy whose personal logo is a toque-clad skull biting down on a chef’s knife dripping with blood. While I usually dig Bourdain’s brutal observations, my first instinct was to write this quote off as typical bobblehead claptrap to fuel television ratings. In the last few weeks though the quote’s essential truth has been haunting me a bit.

Last week I wrote favorably about Michael Altenberg’s new venture, Crust, the first certified all-organic restaurant in Chicago. According to a recent Chicago Reader article, the stringency of the organic certification process means that Altenberg can’t use the products of certain responsible local farmers, people that he’s worked with for years at his other venture Bistro Campagne, because those producers aren’t personally certified at Crust. For that matter, he can’t use many of the local sustainable farms at the Green City Market.

What really put it in perspective for me though was that I’d eaten at the Sunday Dinner Club last week, a local underground restaurant, and they’d made a salad which featured creamy, fresh goat cheese from Prairie Fruits farm. The cheese was only “sustainably” produced, and, therefore, despite its provenance from an environmentally responsible farm (their fruit orchard is certified organic), one of Illinois’ best goat cheeses couldn’t make an appearance on Crust’s menu.  According to that same Reader article, Altenberg will be getting tomatoes from certified-organic Tomato Mountain Farms in Wisconsin next year. I interviewed the owner of Tomato Mountain Farms, Chris Covelli, last year, and he pointed out the absurdity of some of the regulations regarding certification of his farm, including using fish emulsion organic fertilizers on his seedlings. Covelli said that the chemical Miracle Grow was about as harmless as a Centrum vitamin, whereas the fish emulsion, which is derived from ground-up Lake Michigan fish, is probably full of mercury-laden carcasses.

I don’t question Altenberg’s commitment. I know where his heart is, but it does register this question in my mind: Does being certified really matter, or what does it really mean? Altenberg has run a very successful, socially conscious bistro for years, and never felt the need to certify it. I do believe that while most of his decision to certify Crust was about social responsibility, I bet some of it was also about generating buzz. I’ve only got 800 words here, but if you’re interested in this idea you should check out Michael Pollan’s book “Omnivore’s Dilemma” for more.

With these ideas in mind, I stopped in at the new Vella Café (1912 North Western), located under the Western L stop in Humboldt Park (if you sit on the north side of the restaurant, your butt shakes in your chair every time a train roars by).

Owners Sara Voden and Melissa Yen have been selling their panini at the Green City Market for the past two years. Featuring farm-fresh produce from their fellow vendors, their grilled sandwiches were always pretty terrific, so I was psyched to check out their new operation.

Excitement soon gave way to disappointment. On the weekends, half the menu that features their noted savory pannini isn’t served.  When I asked Yen about this, she said something about Vella being new, and then with a look of trepidation stated that eventually they’ll probably end up serving them.

What is featured instead is a breakfast-focused menu they call “blunch.” I applaud the creativity, but “blunch” either sounds like the purple bloom you get from a suckerpunch to the face, or what you do the next morning after drinking one too many bourbons at the Green Eye next door. That being said, my crew settled for a vegetarian panino, a sausage frittata panino and French toast stuffed with rhubarb and orange honey cream cheese.  The French toast was soggy and uncooked in the middle. The pannini were OK, but they were stuffed with a dense-formed, undersalted egg patty that reminded of the egg on a McMuffin sandwich.

Also, hoping to make amends for a bad chai tea made from pre-boxed Oregon Chai concentrate from Red Hen a few weeks ago, I ordered up the Vella version, which was featured as house-made.  It tasted like flat hot water with a hint of spice. This means my favorite chai in the city is still from Panera Bread.

So now what? I haven’t read any stories of Panera exploiting children in Sri Lankan spice mines, but Vella, on the other hand, features fresh local produce, and as a small community business, will probably be a better neighborhood partner. Right now, though, the café operation feels like a poorly run hippie commune fueled on feel-good dreams and little execution.

For now, I guess I’m coming down on Bourdain’s side, and I’ll be drinking the best damn chai I can find. In the meantime, I won’t stop looking for a more socially conscious-produced version that tastes better.