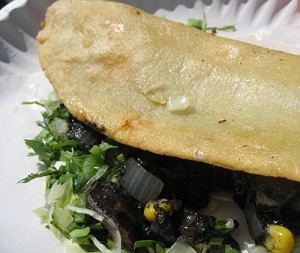 Despite Chicago’s ironclad foie gras ban, I’ve been able to keep my annual consumption of the engorged duck liver at its normal level. I indulged my once-a-year habit (last time I had it was May 2006 at Avenues) when I chowed down on a seared Hudson Valley lobe bedded down on honey and almond cake, and anchored with tossed, roasted Wisconsin strawberries, watercress and drizzled almond cream at Vie restaurant (4471 Lawn Avenue, Western Springs) on Thursday to celebrate my birthday. I’m sure as with any good illegal substance, there are many folks who started mainlining fatty lobes as if they were snorting golden bowls of Bolivian marching powder in conjunction with the ban. As for me, and I bet most other serious diners, it’s always been a respected luxury, which is one reason the ban is absurd.

Anyone who’s really serious about animal protection should instead focus their attention on the June issue of Gourmet and check out Daniel Zwerdling’s article on commercial poultry slaughter. According the article, nine billion chickens are slaughtered a year, and it’s estimated that around fifty million or so of those killings are botched. Consider that twenty-four million ducks total are slaughtered for foie gras in comparison, it seems Joe Moore and his posse had their priorities out of whack.

That being said, if you are a carnivore, there is no more respectful way to celebrate the sacrifice of the animal than to engage in a little head-to-tail eating. The lesson of Thursday’s plate of foie, is that organs, and their other less mainstream bretheren like skin, glands, muscles, etc., can be sublime. Of course, if you remember my debacle with the goat-eyeball taco last year, sometimes you can go too far.

With the ban, I’ve had a good nine months to scout some mystery meat and wacky food alternatives to foie. I promise there are no snotty eyeballs in the bunch, and that my recommendations are truly tasty if you have an open mind. To make a musical comparison, if foie is like Fall Out Boy, which is to say the rich and famous, then the options below are kind of like The Decemberists of adventurous eats: nuanced, incredible, but not quite mainstream. There’s even an option for my vegetarian foie-protesting colleagues.

House Sausage, Parthenon, 314 South Halsted, (312)726-2407
Kind of like in “Fight Club,” there are rules about sausage. You never ask what’s in it. Of course one bite of this fat-caramelized broiled or fried pork link bursting with zingy orange rind and grassy Oregano, and you don’t have to. This may be one of the best homemade sausages in town. Admittedly sausage isn’t that adventurous—this is Chicago after all—but I figure I need to earn your trust.

Sliced Beef and Maw (tendon) Szechuan Style, Lao Szechuan, 2172 South Archer, (312)326-5040
If you don’t ooze native Chinese or rabid foodie, they might try to steer you clear of this classic. Persevere and you’ll score the best tendon south of Argyle Street, mixed with thin slices of moist marinated beef tossed with chilis, diagonally cut shards of scallion and ribbony leaves of cilantro.

Sweetbreads (thymus gland), Pegasus, 130 South Halsted, (312)226-3377
Sweetbreads are the poor man’s foie gras. While not as insanely indulgent, sweetbreads have a similar richness and texture, and the outside is usually seared to a crispy counterpoint or sauteed in a crunchy batter coating. There are a hundred different places to get calf sweetbreads in the city, but for a twist, try the glykadia (broiled lamb sweetbreads) here. Served with a wedge of feta, these are crispy with smoky bits of char on the outside and perfumed with oregano and lemon.

Huitlacoche (corn smut) quesadilla, Maiz, 1041 North California, (773)276-3149
Huitlacoche is an inky black fungus that grows on corn husks. Sometimes called the Mexican truffle, it’s rich and earthy, studded with golden corn kernels, and tastes like a mixture of rare, expensive mushrooms. Former Frontera Grill executive chef Tracey Vowell was so enthralled by the stuff she left the restaurant to farm it full time. Maiz, with its affordable take on authentic regional Mexican, is like the poor man’s Frontera. You can get the huitlacoche on anything, but sandwiched between a grilled corn masa envelope oozing with queso is the best introduction.