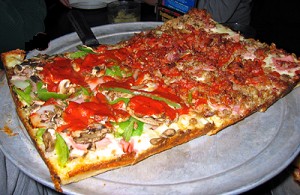 There are at least a thousand pizza parlors in Chicago, but only about ten spots that people constantly war over as the best. There’s the soft thin-crust of Pat’s (2679 North Lincoln—sausage laden of course) and Vito and Nick’s (8433 South Pulaski), the hard cracker thin-crust of Candlelite (7452 North Western—don’t miss the garlic fries either), the Sicilian style bakery pies of Pequod’s (2207 North Clybourn) and Burt’s Place (8541 North Ferris, Morton Grove), the only real deep-dish that’s not a gut bomb, Pizano’s (61 East Madison—butter crust preferred) and the Neapolitan blistered crusts of Spacca Napoli (1769 West Sunnyside). I’ll even throw in the organic-ingredient-topped dough of Crust (2056 West Division), the Chicago original Uno’s (29 East Ohio—too thick) and the New York/Neapolitan Hybrid Coalfire (1321 West Grand—too much soot on the bottom for my taste) into the mix.

Even allowing for unknown neighborhood spots and the idea that some folks really like to pass out from oxygen deprivation after a couple of slices of Gino’s East or Malnati’s, this is still a pretty sad showing for a city/suburban area of nine million-plus citizens.  After all, somewhere between Capone and Vienna Beef salad dogs, pizza rules the pantheon of iconography that defines Chicago.

One of the reasons that hold us back from achieving pie supremacy is that we are a city of immigrants. I’m not even referring to vibrant communities of Poles and Latinos, but of the regional American waves that come for the career spoils from one of the only really vibrant Midwestern job markets. As I like to think of it, except for the stout ham-necked, saah-sage-fingered and frizzy mall-banged Northwest and far South Siders or the swank lanky moneyed North Shore set, no one’s really from Chicago.

While there’s a bar catering to every one of our varied ethnic and sports affiliations, there is no such thing for regional variations in ‘za. Anyone familiar with New Haven pies from Sally’s and Pepe’s or floppy New York fare from Grimaldi’s or Lombardi’s will attest that local kin have yet to be born. Because humans are hardwired to prefer the taste of their youth—i.e. even grandma’s lumpy mashed potatoes are ambrosia because we ate them thousands of times before our tenth birthday—until someone gets it right, you have to go home again to find what you’re missing. Thankfully I only live about five hours from my homeland of Detroit, and this weekend that’s where I headed.

Detroit is not only Eminem and Eight Mile, or Kid Rock and the White Stripes, it’s also a fair food city, and Buddy’s Pizza, my favorite parlor, is located near an ethnic enclave filled with Polish and Middle Eastern culinary delights known as Hamtramck. Located in the city proper at Six Mile and Conant (17125 Conant, (313)892-9001), Buddy’s (aka Buddy’s Rendezvous) is a 71-year-old former blind pig where after World War II, owner Gus Guerra legitimized the business as a legal tavern and added a Sicilian style pie to the menu that still rules the state of Michigan.

My brother gets married in two weeks, so we decided to spend a pseudo-bachelor party evening together, skipping strip-club shenanigans in favor of a little food porn at Buddy’s. Our obsession with Buddy’s is not only born of regional or youthful affiliations, but of religion. Currently I’m a skeptical foundering cafeteria-style Catholic, but up until my senior year of college, I’d never missed a Sunday mass (my folks claim they had me in church days after my birth). I now realize my faithful adherence to the Sabbath was rooted in the fact that almost every Sunday, church was followed by a family trip to Buddy’s. The way I saw it: no church attendance, no pizza.

Buddy’s pizza was godliness, and on this last Saturday, my brother and I were as ritualistic as a priest transmogrifying communion wafers. Other than a frosty mug of Canada’s finest, Labatt’s Blue (back in the pre-drinking days it was Cherry cokes—not the fizzy fountain variety either, but the mouth-coating real soda-shop version made with maraschino syrup), the order’s always the same: an antipasto of fresh-sliced Italian meats and cheese and iceberg lettuce zinged up with a simple red-wine vinaigrette, a cup of stew-like tomatoey Minestrone soup and a large “super” pan pizza.

Buddy’s pizza certainly shares a local cousin in Burt’s or Pequod’s with its airy crust topped with a halo of caramelized cheese and fresh, never-canned ingredients. Still there’s a lightness to Buddy’s crust which is itself a profusion of olive oil-soaked perforations topped with dollops of peppery sweet sauce and a gooey Wisconsin brick cheese of singular elasticity that’s never been duplicated locally.

Make no mistake, though, Buddy’s is no exercise in nostalgia. It is truly one of the best examples of Midwestern pizza, and with Chicagoans so close, it really is worth a drive. And for me, despite the wisdom of skeptics, this pie proves you really can go home again.