by Brian Hieggelke
October 25, 2007Filed under: 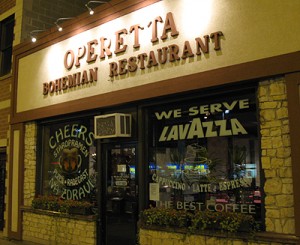 You can tell the authenticity of a Czech restaurant by the appearance of Kung Pao chicken on its menu. If you don’t believe that, the fact that the Bohemian restaurant Operetta (5653 West Fullerton), which seats about fifty but has only three English-language menus, might validate things.

On the first point, I was a little dubious. When I’d scanned the menu and saw the Kung Pao, I thought this might be the Eastern European equivalent to an American diner, the kind of place where you can score a gyro and chop suey. But, according to my Czech friend, it’s common among provincial-style restaurants in the Czech Republic to feature Kung Pao next to their dumplings and roast meat.  Since, I haven’t been able to find the actual reason for this, my personal theory is that after Vaclav Havel’s (former president of the Czech Republic) visit to Rosa’s Lounge (3420 West Armitage) in the mid-1990s he went on a bender and ended up noshing on the excellent Kung Pao at Spring World (2109 South China Place) in Chinatown. So enamored with the late-night bite, he declared it a national dish.

On the second point, if you can swing it, it’s better to bring your own Czech interpreter, as the literal translations on the English menu don’t read very well. Consider “Janosik’s Rib.” I’m all about organ preparations, but I don’t know Janosik so well that I want to eat his rib. Actually, it turns out, Janosik is a reference to the Slavic folk hero who robbed noblemen and gave to the poor. When he was arrested, he was tortured, eventually dying by hanging from his lower rib on a hook. Now that I know Janosik, I’m definitely out.

The Kung Pao dish is not the only amusement. With a name like Operetta, you figure the restaurant stereo system would be tuned to Wagner and Strauss, but instead you get a steady blast of Beyonce and Lil’ Wayne. Also, each of the restaurant’s tables were littered with glossy postcards, an advertisement for “Czech and Slovak Mega Dance Party” featuring a bikini-clad woman sporting a chainsaw. The ad was written in Czech, but my friend said that the reason the woman had a chainsaw in her hand was that the party featured a pig slaughter and roast and a blood sausage contest. These were my kind of people.

The food, like the décor, is inviting, and a perfect way to stave off the razor chafe of a Windy City winter. The ?esneková polévka (garlic soup) fortified with scrambled egg, salty rich broth and crunchy croutons is not only warming, but has so much garlic, that should you run into the vampire Lestat in a dark alley, all you’ll need to do is cough to save yourself. 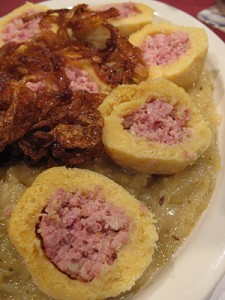 Bramborové knedlíky pln?né uzeným masem are half orbs of potato dumpling filled with chopped, smoked beef and crispy caramelized onion. Talí? Operetta (Operetta plate) is a butcher’s assortment of pork roast, smoked beef and a quarter roasted duck. The lacquered crackling crust of the duck skin was as good as any Peking version.

Featuring moist meats and an assortment of heavy, but not leaden, satisfyingly chewy bread dumplings (like Wonder Bread on steroids), each of the dishes was satisfying. Sauerkraut here is braised for hours, removing the harsh acidic tang common in German-style preparations. The Operetta version is sweet with a hint of caraway, and melts in your mouth, like a fermented cabbage flavored M & M.

If there’s any criticism of the food, it’s that when you combine all the courses, things can get a bit salty. My Czech friend pointed out that saltiness is the conceit of Czech pub food, as it’s all about getting you to quaff lots of beer. Operetta features Pilsner Urquell, Radegast and Staropramen on tap. With a touch more richness and complexity, the Radegast was the best of the three.

After a few of the hulking steins of pilsner, things did get a little salty. Czech food tends to bring about a Thanksgiving-like coma, and so, to stave of the impending slumber, we headed to the liquor store across the street from the restaurant and bought a bottle of Stock Fernet, a Czech digestif. Like errant high-school kids, we did shots from cheap cobalt blue-shot glasses in the parking lot, and with the warmth of the mentholated bitter-herb-perfumed liquor coaxing the blood vessels in my face into a full flush, I knew it wouldn’t be long before I’d be back at Operetta.