by Brian Hieggelke
November 29, 2007Filed under: 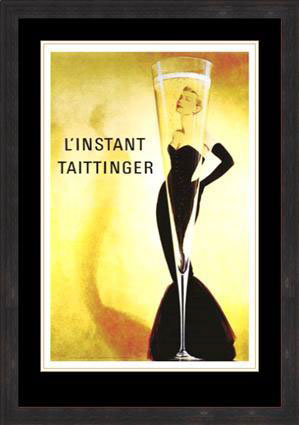 While most men of my generation rocked Kurt Cobain and “Pulp Fiction” posters in their college dorm rooms, I had a vintage poster of a Grace Kelly Taittinger champagne ad mounted above my bed at the University of Michigan. At that time, my cinematic interests were mostly of the “Bill and Ted’s Excellent Adventure” genre, but on the advice of a stoner/aspiring screenwriter I worked with, I started checking out the Hitchcock canon in my free time.

When I got to “Rear Window,” I spent the first ten minutes of the movie bored, watching the cantankerous, wheelchair-bound, pajama-clad Jimmy Stewart stare through binoculars at his neighbors. But when Grace Kelly glided through the door of Stewart’s apartment, I was smitten. My boredom shifted to wonder about a twisted world in which the bumbling, old, funny-talking dude from “It’s A Wonderful Life” would score a siren like Kelly as his girlfriend.

After that I pursued everything Grace, eventually settling on the champagne ad as a proper adolescent shrine. I’d lull my self to sleep by staring up at her form hugged by a black mermaid-cut evening dress, her generous décolletage breached by a line of shimmery golden bubbles flowing through a v-shaped Taittinger-filled flute. The propaganda worked, as this ritual eventually had me bribing my buddy from New Jersey, who had the best fake ID in Alice Lloyd Hall, to get me a bottle.

Prior to drinking that contraband bottle, I’d only really had Italian sparklers, cloying sugary spumantes like Asti. In contrast, the Taittinger smelled like the yeasty perfume from the Polish bakeries I grew up visiting with my mom in Detroit’s Hamtramck neighborhood. The first sip was like crunching into an apple fresh from the branch. This was the first champagne I’d ever loved. Eventually there was Krug, Dom Perignon and a whole host of others, including a grower’s rose in Paris three years ago that I still wish I knew the name of. My tryst with bubbles had eclipsed even my love for Grace.

The affair continues, much to the detriment of my wallet but, I hope, as a boon to your seasonal sipping plan. Below I’ve compiled a list of my current sparkling objects of affection for your holiday drinking pleasure.

Segura Viudas “Brut Riserva” Cava, $6.99 – Trader Joes and Sam’s
Some days I’m more likely to have a bottle of this Spanish sparkler in my fridge than a bottle of milk. While it’s priced like Mad Dog 20/20, this is a no-nonsense fruity dry gem that drinks well by itself or at the bottom of a mimosa.

L. Mawby Cremant Brut Michigan, $19.99 – Sam’s
This sparkler bottled in Suttons Bay, Michigan is the perfect gift for the militant locavore in your life. Outside of Roederer Estate, vintner Larry Mawby is one of the best domestic producers of sparkling wines, and this bottle, which has a nice bit of toast, nuttiness and fruit, tastes as good or better than older nuanced vintage champagnes at a fifth of the price.

Marguet Pere et Fils Rose, $35.99 – Binny’s, Sam’s
Value-priced pink champagne doesn’t have to mean a Cold Duck Christmas. This is a great balanced Chardonnay grape champagne with a touch of sweetness and cherry added from a bit of pinot noir.

Bollinger Special Cuvee, $42.99 — Sam’s, Binnys
This is my desert-island bottle, and West Town Tavern chef/owner Susan Goss once told me this stuff would be part of her last meal on Earth. There’s something about the balance of big yeast and tongue-tingling citrus that makes this one off the best large-production bottles around.

1985 René Collard Cuvee Speciale Rosé Brut, $79.99 – www.klwines.com
I’m guessing some of my readers can celebrate their birth years with this 22-year-old beauty. And they should. Gary Westby, a champagne buyer for K and L wines, says, “I have never experienced a wine like it …The purity, power and grace of the Meunier left me wordless at my notebook … it is better Pinot Noir than Pinot Noir is!” Rene Collard’s champagnes had never been exported to the United States until 2003, and the stuff Westby buys is from Collard’s rare private stock. Any of the Collard offerings at K and L are worth the splurge, but this is my favorite.

Finally, a parlor trick for finding better champagne: On the lower-right-hand corner of the front label of a French (i.e. true) champagne you’ll usually find a set of letters that indicate whether the champagne was made by a large manufacturer (NM), a grower (RM) or two or more growers using a shared facility (SR). Grower champagnes tends to come from one or very few vineyards. Grower champagnes also tend to be made by artisans who produce on a small level, often hand-harvesting and using processing equipment that encourages better flavor rather than production efficiencies. While it’s not a perfect system, grabbing a bottle labeled “RM” or “SR” over one labeled “NM” is a better bet than picking a label with a picture of a drunken kangaroo or a snowboarding lizard.