After  a weekend of ice storms, we like to remind ourselves of the reasons we love Chicago. And few things make Chicago finer than its native sandwich, the Italian Beef, an offering so ubiquitous around here that ex-pats are usually amazed to discover that it’s an “only-in-Chicago” thing. In that spirit, we offer up a bite of the city’s best beefs.

Al’s #1 Italian Beef
Featuring more than thirteen herbs and spices, owner Chris Pacelli likes to joke that his beef has two more flavors than the Colonel’s secret recipe over at KFC. Whatever the other twelve are, one of them is most definitely nutmeg, making this the most distinctive beef in town. Add a thin giardiniera mix studded with paper-thin celery and red pepper and you’ve got a beef with personality that draws a sharp dividing line. Many detractors can’t stand the sweet aromatic they associate with Christmas cookies. Devotees on the other hand consider it the best beef in town. Love it or hate it, there’s nothing better than bellying up to the stainless-steel counters, unwrapping a beef, assuming the “Italian stance” (legs wide apart, elbows akimbo and gut sucked in to avoid dripping juice on your clean clothes) taking a bite and watching the summertime masses jockey like Merc traders for Italian lemonade across the street at Mario’s.
1079 West Taylor, (312)226-4017

Bobo’s Hot Dogs
Best known for its hot dogs, Dunning’s Bobo’s also boasts a razor-sharp beef sandwich, spicy and tangy in good measure, a shot to the gut that, admittedly, you may regret later, but in the present tense is all you could ever imagine eating. Doused in the meat’s juices, the true pleasure here is consuming the sandwich naked—no, not you (although you can try), the sandwich—just bread, beef and juice, the way it was originally intended. A Bobo’s beef is not meant to be cherished, but rather to be slammed down shamelessly, maybe even in the car. However, if you want to savor the flavor, summer’s the best time to visit—the outdoor picnic benches that sit this close to Irving Park provide a pure summertime setting. The beef will make it hotter.
8258 West Irving Park, (773)625-9840

Chickie’s
The deep fryer and surrounding appliances wear a patina of black grease stains, the lighting is low and the staff is straight-up South Side. This is the Johnny Cash of beef stands, an old stalwart punk shop slinging a shredded, braised-style Italian beef that kicks ass and takes names. On the surface, Chickie’s sandwiches, served on Gonnella rolls and piled high with Scala’s beef, look like a standard-issue sammie, but one bite yields a beefy gravy explosion of note. Ordered with hot peppers, the sub packs a fruity and spicy perfume from a diced combo of jalapeno, cabbage and celery. Unlike big-personality one-note spiced beefs, Chickie’s beef is a study in balance.
2839 South Pulaski, (773)277-2333 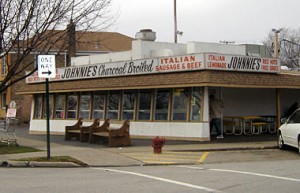 Johnnie’s Beef
If Chicago ever got its own “Seinfeld,” the glowering countermen at Johnnie’s would inspire a “Beef Nazi” episode. You want a cheesy beef? Better move to Wisconsin. If you can’t spit out “sweet-beef-dipped” without stuttering, head to the back of the line. This white brick shack holds about seven customers at a time, which means three quarters of the ubiquitous lineup of clamoring patrons snakes around the building. If it’s summer, you wait and dream of the lemon ice. If it’s winter and you’re waiting outside the plate-glass entry door, you’ll be tempted to open it and stand half inside the warm beefy air of the store and half out in the chill. Heed the printed warning on the door and keep it closed. Should a draft fall upon the grill man, you’re asking for a smackdown. The beef itself is one of Chicago’s best, a lean oregano and garlic-tinged number.
7500 West North, Elmwood Park, (708)452-6000

Luke’s Italian Beef
Here is a loud restaurant (at least fifteen workers behind the counter at lunchtime) in the midst of a loud location, for the last fifteen years serving the enormous demand of the Loop for beef, fries and goofy sculptures on the wall. There’s a red-green Italian theme inside Luke’s, made all the more evident by the 3-D art on the walls of sausage pizza or of indulgent bulls laying on their backs, romantically sharing a bowl of pasta. It’s quite off-the-wall (literally), but the food is straight-up, with slices of homemade beef that aren’t too thin or too thick and the relationship between juice and bread reaching the perfect sogginess index. And, if that’s not enough to fill you up, an order of “small fries” is apparently the equivalent of a small mountain—but still delightfully hot and freshly cut.
215 West Jackson, (312)939-4204

Max’s Italian Beef
This West Rogers Park institution has been a South Beach or Atkins dieter’s nightmare since 1957. The parking lot features a herd of rusty steel cattle sculptures, and when you walk inside, the interior walls are covered with an all-encompassing mural of sky and the Chicago cityscape. In a local game of “Where’s Waldo?” Max’s logo—a cow that looks like a Cubs bleacher bum clad in baseball cap and sunglasses—is littered throughout the acrylic renderings of the Smurfit Stone, Prudential and Aon Center buildings. While regarding cheese on Italian beef is still open for debate. Max thumbs its nose at purists, offering a great cheddar-laden version. They also score points with free giardiniera, a potent orange-tinged oily mix of garlic, red and sport peppers served in plastic tableside tubs. The beef is shaved in translucent sheets and is one of tenderest and leanest cuts around. Once you order up a side of their Ghetto Fries, thick-cut spuds oozing with a dollop of Merkt’s cheddar cheese, a drizzle of Italian beef gravy, onion slivers, sweet barbecue sauce and the giardiniera, you might stop going anywhere else.
5754 North Western, (773)989-8200

Mr. Beef
With the fifties décor and overhead soundtrack—plus a graciously friendly staff, a bit of an anomaly when it comes to Chicago beef merchants—the Northwest Side’s Mr. Beef certainly rivals the Orleans Street location, not only in taste, but in presentation. The beef is astounding—soft, tender and generously juicy, the sandwich falls in between the too-much-spice and too-bland territory, making it nearly perfect—and with the usual options (cheesy, sweet peppers, hot peppers), you can make it your own. An added bonus—the size. Unlike some beef stands that get stingy with the mass, Mr. Beef’s forks over a hunk of heaven, often too much to handle, a whole brick of devilish joy that’s complemented, salaciously, with either a bundle of cripsy, perfect fries, or fried mushrooms. A bonus? They deliver, and you can buy the beef (and bread) in bulk, if you’re looking to feed a whole party.
3917 North Harlem, (773)283-7444

Pie-Eyed Pizzeria
If you can find the will power to steer yourself away from the joint’s alluring slices, try the beef, a colossal wreck of meat shavings and peppers, dotted in your belly by the thin, crispy fries, a gut bomb that’s worth it, an attack on your stomach with style. Leaning more towards the dryer, plain side of the beef-sandwich spectrum, Pie-Eyed’s beef offers refuge for the juice-averse (or those looking to keep their hands clean), and actually presents a sandwich that won’t fall apart after a handful of bites. A lovely, if simple, beef concoction, one that exquisitely serves its purpose—the other option at the pizza stand. But the real coup rests in the night—Pie-Eyed’s open until the wee on weekends, serving slices to stomachs that need alcohol-soaking; why don’t you try a beef at three o’clock in the morning?
1111 West Chicago, (312)243-3735

Pop’s Italian Beef
Located in Chicago’s Mt. Greenwood neighborhood, Pop’s is so far south, you’ll be able to make a claim for honorary Hoosier citizenship after making the trek to procure a beef. This takeout-only joint, with its sloped roof, looks more like a slushie shack than a storefront greasy spoon. It’s definitely a community-gathering place where soccer moms and their grass-stained shin-guard-wearing offspring suck down post-game ice cream and beef. Served on a fat Italian roll, the hot-peppered slices of sirloin here are laced with celery, green and red pepper. French-fry freaks who press their noses to the glass can time things right and score fresh-out-of-the-deep-fryer spuds that surpass the splendor of the Golden Arches.
10337 South Kedzie, (773)239-1243

Portillo’s Hot Dogs
Entering the revolving doors off of Ontario is something like going through a time warp. Suddenly, the tacky tourist-trap vista of the surrounding area turns into a retro-styled restaurant set in the middle of a fake apartment complex, complete with annoyed neighbors and the all-important laundry line chock full of Portillo’s apparel and some oversized undergarments. With a steady clientele that alternates between locals and tourists, Portillo’s is always bustling. To remind you of some of the more famous faces that have entered their doors, they also have autographed pictures up from local celebs such as Jim Belushi and R. Kelly. It’s not all surface here either, as their beef is wonderfully flavored and, despite the abundance of juices, the bread never falls apart. Portillo’s has long been steeped in Chicago culture, and with so many locations in the suburbs, they’re hard to miss—there are thirty-one locations in the Chicago area alone. However, it all started from modest beginnings with the original, which was essentially a trailer, called “The Dog House,” opened in 1963 in Villa Park until owner Dick Portillo eventually renamed it.
100 West Ontario, (312)587-8910