by Brian Hieggelke
December 13, 2007Filed under: 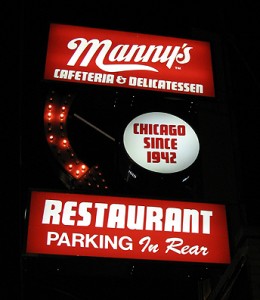 Though he’s a native-born Chicagoan, my 8-month-old son’s middle name is Detroit. My wife and I figured if he became a rock star, he could just drop his guttural Slavic surname, and he’d have the perfect pseudonym: Grayson Detroit. We also figured once he got past the elementary school teases, future lovers would be smitten by the cool moniker. At its most basic, the name is a reminder of where he came from—or, more precisely, where I grew up. And by transitive relation, it was also about commemorating the place that launched my love for Chicago.

While it’s currently “America’s Most Dangerous City,” Detroit is also Motown, the birthplace of Seger, Iggy and the Stooges, the MC5 and the White Stripes. It was the antidote to my Tom Perrotta-esque suburban upbringing, an oasis of diverse cultural escape, where I could while away afternoons at the Diego Rivera murals in the Detroit Institute of Arts or watch Alan Trammell crack a bat a Tiger’s Stadium. Culinarily, it was home to great chili dogs at Lafayette Coney Island, Sicilian bakery-style pizza at Buddy’s and my first slices of baklava and saganaki in Greektown. I’d figured after I graduated from college, I’d live downtown, be part of the revitalization of the city. But, the rust belt had rusted. There were few job opportunities.

While I left it behind, Detroit had cultivated an urban lust that needed sating. Chicago was the next logical geographical choice to satisfy. The Windy City has proven a worthy mistress. After a seven-year affair, I love her as much as any Bridgeport bloodliner. Watching blown-out bop at 4am at the Green Mill or staring at the baroque ceiling of the Palmer House Hilton stirs my soul. Sucking down crispy sausage slices at Vito and Nick’s and fiery giardiniera-infused Italian subs from Bari, slurping down Ramova Grill chili and standing in long lines at Mario’s and Al’s are delightful rites of passage and an informal food-based system of naturalization.

Just as naming my son was pregnant with expectation and fantasy, so was the idea of taking him to these restaurants for the first time, cultivating culinary traditions and hopefully nurturing his own love of Chicago. Up until a month and a half ago, I couldn’t do much about this, as he’d been weaned exclusively on a diet of breast milk from a native Michigander. But, now, as he’d moved to solids, the opportunity was upon me. Any of the places listed above would be a great start, but there was one Chicago culinary tradition I held above all—a visit to Manny’s.

I have no idea why the remnants of Jewish culinary heritage of old Maxwell Street have such a pull on this Polish Catholic boy. Maybe it’s because Manny’s channels the Hopperesque Nighthawks ideal with its chrome-, steam- and formica-filled environs. Or, as a former political wonk, maybe it’s the idea of a chance encounter with regular patrons like Mayor Daley.

With my own mother living 300 miles away, maybe it’s that Manny’s is the only real opportunity to score a home-style meal of tender pot-roast-like short ribs, tangles of spaghetti and corn-starch-laden cherry pie.

Maybe it’s that it’s the perfect place for establishing family traditions. Third-generation proprietor Ken Raskin is the grandson of founder Jack and son of the namesake Manny. (Jack bought a restaurant named Sunny’s to house the original cafeteria. Rather than tearing down the old sign and buying a new one, he named the place after his teenage son, which allowed him to save money by buying only two new letters—“Ma” to replace the “Su” in Sunny’s.)

Most likely though, it’s the incredible pastrami. New York has Katz’s and Carnegie, Montreal has Schwartz’s, Miami has the Rascal House and we have Manny’s. Even better, we have Gino. For over a decade, Gino Gambarota has stood sentry over the meat slicer in his white butcher’s apron and paper-boat hat. The chief of corned beef always flashes a wicked grin under his bushy walrus like mustache. It’s as if he’s challenging you to order. When you do, he’ll sling a wry insult or ironic pearl along with your meat, followed by a glinting wink, letting you know it’s all in good fun. 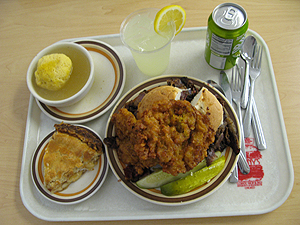 As I strollered my son through the line for the first time, Gino didn’t disappoint. He noticed Grayson and said, “What a cute boy. Good thing he takes after your wife.” We ordered up a pastrami on an onion roll, a fluffy, fist-sized latke and a can of Doc Brown’s Cel-Ray, and sat down to a flecked-formica table.

It’s rare in life that the first of things is more than a moment in our mind’s eye, but like an amateur Henri Cartier-Bresson, I stood with my Canon digital, waiting to capture the decisive moment as my wife broke off a piece of peppery moist pastrami and held it above my son’s head like a priest pro-offering the Eucharist. As my son gummed the slice with a gusto he usually reserves for soft blocks and pacifiers, I thought, a boy named Detroit is finally on his way to becoming a true Chicagoan.