by Brian Hieggelke
December 20, 2007Filed under: 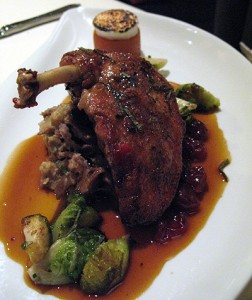 The tragedy of good interface design is that if a designer’s done his or her job, no one seems to notice. Sure there’s the occasional Apple product about which folks bomb Internet forums regarding “scroll wheels” and “flicks” like squalling schoolgirls pining for The Beatles on Ed Sullivan. But when’s the last time you got psyched over a computer mouse or a telephone?

I feel the same holds true for good restaurant décor. Occasionally there’s the Jerry Kleiner “Moulin Rouge on Acid” design scheme (Opera) where you’re so blown away you could care less about what comes out of the kitchen. But for the most part, décor, as long as it matches my expectations for the food, doesn’t matter to me.

Even when the decor is bad, it can still work in a restaurant’s favor. I’ve discovered so many terrific ethnic joints which were only a health-inspector’s-bribe away from shutting down, that I almost expect a little bit of dinginess in those cases. One of my most memorable meals in Paris was not in a Michelin three-star temple of gastronomy, but in kebab shack that looked like a Parisian riff on the American truck-stop diner with a clutter of ramshackle tables and disco-era mirrored walls. Considering the fact that I was able to procure smoky, molten grill-marked foie gras on a stick for only $8, it felt as grand as the hall of mirrors at the Palace of Versailles.

That being said the décor and service experience on a recent visit to Powerhouse (215 North Clinton) finally rankled my inner culinary curmudgeon. For years I’d driven by the ghostly remains of the old Northwestern Railroad powerhouse located under the Lake Street El, and marveled at the towering arched windows which channeled a cathedral rather than the hot-coal boilers which once ran inside. When a sign went up a few years ago advertising the property was for sale, I’d wished for an inheritance so I could buy the building and transform it into a premier party pad.

While the inheritance never came (damn you Illinois lottery), someone else developed the property and opened a restaurant. If the building couldn’t be mine forever, at least it could be for a meal. Not any meal, mind you, but one borne from a dream team of an eighteen-year veteran manager of Charlie Trotter’s, a Greek restaurant tycoon and the former sous chef from Alinea.

It turns out this particular restaurant group was not the 1992 Olympic basketball dream team of Magic and Bird that won gold, but rather the 2004 version with Allen Iverson and Tim Duncan that got a beat down from Argentina.

Even though we were the only patrons in the restaurant, it took us five minutes to get a wine list, another five for a menu and fifteen for bread and water. The wait staff was decked out in short white coats that make them look like either first-year medical students or asylum employees. Based on the meth-withdrawal-like tweakiness of our server, I’d go with the latter. That being said, the guy was well-versed on the menu, ingredients and the chef’s techniques more than any server I’ve had of late. 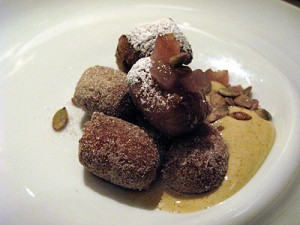 Despite the décor and spotty service, the food was superb. Lobster risotto is often so named because the rice is tossed with some meager left-over lobster trimmings. The version here was crowned by a handful of big fat meaty lobster medallions flecked with a glinting micro jewel-like confetti of salty rich house-cured lobster roe.

Slow-roasted pheasant with sage stuffing, caramelized Brussels sprouts, cranberry gastrique and sweet potato is what Thanksgiving might be like if your mom was Julia Child. In addition to his spot-on cooking finesse, Chef John Peters slings a little whimsy with this plate, topping the sweet potato round with a bruleed marshmallow. It’s definitely a touch of confidence on his part, as many high-end chefs would probably write off such a homey presentation as totally Aunt Betty Crocker.

The only minor misstep was an olive-oil-poached Atlantic cod with Meyer lemon oyster cream. The oyster cream didn’t have much lemon taste, except for the couple pieces of zest that were parsimoniously shaved over the sauce.

Brown-butter-glazed tater-tot-sized sweet-potato beignets chilling by a cinnamon-spiced pool of creamy sabayon flecked with candied pumpkin and toasted, salted pumpkin seeds is one my favorite desserts of the year.

Still, amidst all the great food, a red glass teardrop vase on our table sported a crack. It could have been from the constant seismic activity from the Metra and Lake El lines that run near the building. Our banquette literally jiggled almost every twenty minutes. While Powerhouse serves up some of the best downtown eats, it remains to be seen whether this quirk will be considered a charming detail, or marginalize the restaurant as a destination only for those who’ve always dreamt of chowing on $44 ribeye while riding the Superman: Ultimate Flight coaster at Six Flags.