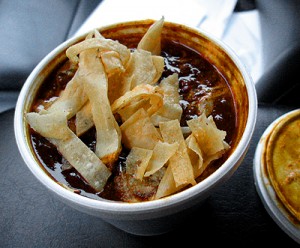 For most of us, this year’s Super Bowl will be a doleful reminder of last year’s Bears collapse in the big game. Sitting down to watch the Giants battle the Patriots will do nothing but stir up 2007’s carnival of failure featuring Lance Briggs’ pre-season hold-out and Lamborghini hijinks, Tank Johnson’s legal woes, Brian Urlacher’s baby-mama drama and press tantrums and Rex Grossman’s ability to make ‘ole neckbeard Kyle Orton look like a promising NFL quarterback. So, why don’t you just turn off those plasma and DLP screens, skip the big game and hit the road in search of something to soothe your soul? In an effort to provide succor and to keep you warm through this January chill, I’ve compiled a list of some of Chicago’s own super bowls of soup, chili and stew to aid your journey.

Bigos (Polish Hunter’s Stew): Szalas, 5214 South Archer, (773)582-0300
One bowl of this stew, filled with bacon, pork shoulder, kielbasa and grilled onion and hit with a dollop of tomato sauce and the fizzy tang of warm sauerkraut, is so rich that it would likely keep the entire Bears offensive line warm on a trip to Lambeau Field in December. There’s a version of Bigos at every Polish joint in the city, but the addition of a sweet dash of pineapple here makes this version distinctive.

Avgolemono (Lemon-Egg Soup) aka Traditional Soup: Artopolis, 306 South Halsted, (312)559-9000
Lemon-egg soup is almost as popular as the gyro and flaming cheese in Greektown. And in most cases, this kind of ubiquity breeds mediocrity, but the lemon-perfumed veloute-style broth here, studded with hunks of shredded chicken and al dente grains of rice, is a masterpiece. The eggy essence that runs through each sip of the broth is comparable to a great soufflé.

#29 Pho Dac Biet: Hai Yen, 1055 West Argyle, (773)868-4888
This is the soup that proves the normal connotations of the phrase “a bunch of tripe” wrong. Featuring a throat-soothing beef broth filled with tender cuts of beef brisket, beef flank, tendon meatballs, stomach, tendon strips and super slurp-worthy rice noodles, there’s nothing empty or meaningless about this bowl. Not to mention, seasoning your soup with the salad bar of accompaniments that includes fresh-cut sweet basil, a mound of bean sprouts, a wedge of lime and dollops of spicy Sriracha (garlic chili sauce) and plummy star-anise-infused Hoisin sauce, is an interactive opportunity to fulfill your inner child and once again play with your food.

Chili: Ramova Grill, 3510 South Halsted, (773)847-9058
This is the best example of Greek-rooted Cincinnati-style chili in Chicago. Featuring slow simmered micro-granules of beef coated in sweet spices including nutmeg and allspice, this version might be better than those found at Ohio originators like Skyline and Gold Star. Furthermore, everything from chalkboard-style menu to the wood cabinetry warped from eighty-nine years of use to the phone booth in back (which houses a pay phone that serves as the restaurant’s only phone line), the genuine history you can experience here is as good as the food.

Crawfish Étouffée: Lagniappe, 1525 West 79th, (773)994-6375
You can’t go wrong with their gumbo, but the etouffée, a chocolate-brown swamp filled with plump briny crawfish and specks of peppers and onion surrounding an island of white rice, is as good as anything New Orleans has to offer.

Hot Potato, Cold Potato: Alinea (Tour Menu), 1723 North Halsted, (312)867-0110
If you’re the kind of person with a GI Joe or Army Surplus fetish, a hankering for four-star French gastronomy and a crush on Phillipe Starck, this is the soup for you. A black-truffle-enrobed Yukon potato ball glistening in hot butter, a fissure of parmesan, a sliver of micro-chive and a micro-dice of butter hover on a handmade stainless-steel pin over a sleek paraffin bowl filled with icy-truffle potato soup. Like the classic McDonald’s McDLT, the hot stays hot and the cool stays cool. Pull the pin, grenade style, and the sizzling garnishes careen into the bowl below. Throw the whole thing back like a college kid goin’ to town on a Jaeger bomb, and you got yourself a wicked temperature-contrasting dose of liquid comfort.