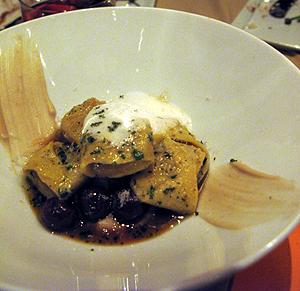 I was not a precocious genius, like, say, a 2-year-old Tiger Woods ripping a tee shot on “The Mike Douglas Show.” There was no crème brulee epiphany at the foot of my grandmother. It took me twenty-eight years of school and aimless work to discover food writing.

Though my mother was a fine scratch cook, I ate quite a bit of Hamburger Helper, SpaghettiO’s and Campbell’s Soup. My only culinary experience was making pizza alongside a crew of shaggy-haired, though engaging, stoners in high school. Luxury dining meant the Admiral’s Feast at Red Lobster.

I really owe my interest in food to the Blackstone Hotel on Michigan Avenue. In 1997, while most of our college friends headed for the drunken shenanigans of Florida or Cancun, my girlfriend and I headed to Chicago for spring break. Having scored bargain-basement hotel rates, a frigid destination in the middle of February sounded good.

When we arrived at the Blackstone, our cheap-fare status was apparent, as the bellhop showed us to a room with the charming vista of a brick wall. He registered our disappointment, and told us not to unpack, and left. Minutes later he returned, grabbed our bags and whisked us to a suite. Though the rich wainscoting and period fixtures of a once-grand hotel remained, the damask curtains were threadbare, plaster was cracked and the fireplace mantel was askew. But, now overlooking the majesty of Grant Park and the Lake, we would have slept in a refrigerator box.

As we considered dinner plans, I’d found a Wine Spectator in our room, where I read about Everest and their pre-theater menu. We made reservations.

We ascended multiple elevators to the fortieth floor of the Stock Exchange building, and walked into an expanse of alabaster, gold and leopard-spotted carpeting. Damn, I’d landed in Liberace’s palace. Though he didn’t really have one, in my mind, the Maître d’ was wearing a monocle. All I could think was, thank god I wore a tie. We were seated by magnificent plate-glass windows overlooking the glinting expanse of the western suburbs. On repeat visits, I’ve never again scored a window seat.

There was a tuxedoed Indy 500-size pit crew of food runners, captains, waiters and sommeliers. A food runner brought out the “amuse” course, and before I could protest, he spat out the magic words “Compliments of the chef.” Back then “a muse” was an artistic inspiration, not a way to start a meal. This particular bite was a cauliflower puree topped with caviar. I had visions of over-steamed chalky pap and nasty fish eggs. I’d never been more grossed out and fearful of a spoon.

Not wanting to look like the 21-year-old rube I was, I threw it back like a shot of Jaegermiester. The rich cream-and-butter-infused puree rolled over my tongue and each bubble of caviar popped between my teeth, setting off a cascade of salty fireworks. My misconceptions about cauliflower and fish eggs were transformed. I’d wondered how many good things I’d rejected because of ignorance. I didn’t know it then, but I’d become a food adventurer.

Shortly after, the Blackstone closed. I haven’t been back. After an aborted condo scheme, Sage Hospitality bought the Blackstone, remodeled the hotel and launched Mercat a la Planxa restaurant last Saturday night. Now there was a reason to return. 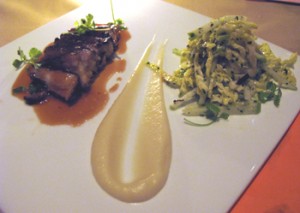 Mercat is helmed by Jose Garces, a Chicago-born Kendall grad who built a Nuevo Latino empire in Philly. Despite the fact that my visit occurred on opening night, Garces and his team rocked the open kitchen as if they’d been together as long as U2.
Simple flat-top (planxa) grilled fare like head-on prawns and meaty lamb chops paired with smokey romanesco sauce were cooked to perfection. Pork belly with sherry glaze, green apples and truffle slaw was like an awesome Spanish riff on South Carolina BBQ.

The braised rabbit agnolotti with rosemary, truffle chestnut puree and brandied cherries is my favorite dish of the year. The funky creamy sauce, al dente pasta and tender rabbit was so comforting, it would probably soothe me through bankruptcy and a firebombing of my condo.

A Black cod confit dish was undersalted, and the mixture of haricot vert, morcilla-potatoes and orange saffron emulsion undergirding it was a confused mess. Out of the thirteen dishes I tried, this was the only real failure.

It seemed like there was at least one server or food runner for every single table. No idea if it’ll stay that way, or whether it was just a smart opening-night move to overstaff, but it worked. Courses were delivered quickly and tables turned like the teacup ride at Disney World. One service tweak, I’d make. The staff should change out the individual plates diners use for sharing food more frequently, as flavors from different courses get mixed after a while.

The dishes are creative and far elevated above tapas stalwarts like Emilio’s, Café Ba Ba Reeba!, etc, and the prices are right (from $5-$15 bucks for most items, with a few grilled items topping out at $32) for the portion size. Once again, the Blackstone has been good to me. I can guarantee next time it won’t take eleven years to return.