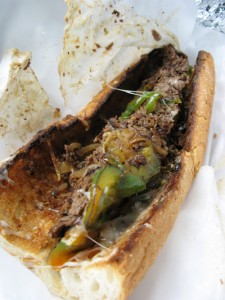 Oprah’s weak. She only shares her favorite things once a year. I, on the other hand, am back with another edition of my favorite, food, wine and restaurant dishes. These goodies were sampled in the last few months, but I haven’t written about them because they didn’t work in the context of a full-blown column. Enjoy.

Philly Steak – Grandaddy’s Subs, 2343 West Taylor, (312)243-4200
They say you can’t replicate a regional delicacy like the Philly cheese steak outside of Philly because of the local bread. That might be true, but when you start with your own good local bread, like Gonnella, you’re already halfway there. Grandaddy’s, an old stalwart in the middle of the Tri-Taylor neighborhood, starts with their French-style roll featuring a cracklin’ crust and an airy crumb, toasts it, and fills it with griddle-charred chopped steak, roasted paper-thin green peppers, caramelized onions and a couple of slices of oozy provolone (yeah, we know, Cheez Whiz is the Philly custom). Call it what you want, but it’s one of the better steak sandwiches in town.

Walnut Shrimp – Restaurant Guan, 2426 Main Street, Evanston, (847)328-9177
What’s not to love about deep-fried food slathered in mayo? Glassy, candied pecans hold court next to fat tempura-battered, butterflied shrimp drizzled with a sweet salty elixir of condensed milk and a touch of mayo. It reminds you of the center of a good shrimp tempura maki roll without all the seaweed and rice getting in the way. The garnish, yamamomo—or, Japanese mountain peach—has a sweet acidic punch that cuts through all the fat and balances the plate.

Fried Chicken Livers, Rosscoes Chicken and Waffles, 3947 South King Drive, (773)536-3300
Aping the famous L.A. chicken-and-waffle chain “Roscoes” right down to the beige menus probably won’t score points with the trademark-infringement police. But since tasty treats are my only real jurisdiction, I’m only qualified to declare that the chicken livers coated in a spicy, crunchy batter and filled with molten-hot offal here are so good that they should be illegal. Don’t forget to ask for a side of syrup for the dipping. The chicken’s good, too, and uses the same batter. In case you’re wondering, the waffles are soggy, thin and forgettable. [Editor’s note: Since renamed Chicago’s Chicago and Waffles]

Crispy Tacos – Mexican Inn, 9510 South Ewing, (773)734-8957
Next time you get hungry on the skyway, skip the McDonald’s oasis and get off at the South Anthony exit and head east on 95th until you see this corner spot at the junction of rout 12/20 and 41. Open since 1961 by the Cornejo family, this is one of the city’s oldest Mexican spots. With some old-school banquettes, Aztec-looking wall accoutrement and a light-up cactus, it’s kinda like the old man dive bar equivalent of a taqueria. The deep-fried, glistening corn tortillas here stuffed with crumbly Mexican cheese, crisp iceberg lettuce and well-seasoned meat of your choice (I love the green chili pork), beat the pants of the industrial hard shells at Taco Bell.

Launois “Cuvee Reserve” Brut Blanc de Blancs – found at Binny’s South Loop
Blanc de blancs translates as white of whites, which means this bad boy is made from a hundred percent Chardonnay grapes. It comes from Mesnil, the southernmost Grand Cru in the Champagne region of France. The grapes come from neighboring vineyards which produce some of the best bubbly in the world, like Krug Clos de Mesnil and, in very special years, Salon. The first sip fills you with a full-bodied warmth of honey and toast. It’s champagne like this that makes you realize that the reasonably tasty bubbles clocking in at ten bucks at Trader Joes have nothing going on (and I’ve been a big booster of, say, Segura Viudas and some of those other value brands). At $35.99, it’s special-occasion for sure, but with Krug Clos du Mesnil clocking in at over $200, it’s a steal.

2006 Pichot Vouvray Domaine le Peu de la Moriette – found at Binny’s South Loop
Pinot grigio, chardonnay, cabernet, merlot and pinot noir are more overexposed than Britney Spears. As such, it’s rare that outside of the hardcore wine folk like sommeliers and rich collectors that anyone has a clue about more obscure wines like Gruner Veltliner, Carmenere, Riesling, Malbec and Moschofilero. But an adventuresome streak and a willingness to trust your palate and your local wine geek instead of some glossy wine rag or ratings system will open up a whole world of affordable tasty wines. Vouvray, a French commune east of Tours that makes pretty awesome wine from the Chenin Blanc grape, is one of those wines. This particular bottle is a still semi-sweet wine with hints of peach and citrus and a good bit of acidity at the end. It’s the perfect bottle to accompany sweet Chinese dishes like Sesame chicken or the Korean Seoul Sassy fried chicken at Crisp (2940 North Broadway).