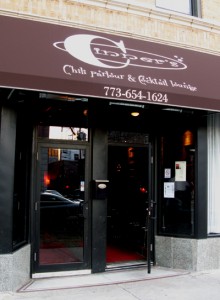 “You know Jerry Springer? I’ve inhaled with him more than a few times,” says Ed, a displaced Cincinnati architect nursing a glass of red wine at the end of the bar. On my left, a barrel-chested buzz-cut man, another former Queen City native, a national guardsman about to be deployed to Afghanistan, reminisces about lazy afternoons watching Pete Rose and the Big Red Machine at Riverfront stadium. The transplanted faithful are out in force on the first Saturday night of Lincoln Square’s new Cincinnati-style chili parlor and lounge, Cinner’s.

In the center, behind the bar, back-dropped by black-and-white photos of Cincinnati Reds greats like the “old lefthander” pitcher Joe Nuxhall and front-lit by a trio of red Ikea pendant lamps, is owner Tony Plum, an itinerant restaurant-and-bar-industry vet, and of course, a Cincy boy. With a black shag of wet ringlets, a sharp aquiline nose and a wiry form, he looks a little like Tommy Lee.

Like Lee, he’s also fairly tattooed, though there’s no baroque barbed wire, fierce animals or imitation tribal markings. Plum prefers works of art. There’s Picasso’s “Old Guitarist” and Michelangelo’s “Hands of God” detail from the Sistine Chapel on his left arm, Van Gogh’s “Starry Night” on his left leg and Dali’s “Christ of St. John of the Cross” on his right torso, a nod to the fact that he spent the last decade as a visual artist. Plum was also a singer-songwriter fronting California bands P.S. Chambers and Karmic Book Heroes. Asked how he went from singing to slinging chili, he jokes, “I got too old for the rock ‘n’ roll lifestyle.”

His real reason for coming to Chicago, though, was that he got tired of California and wanted to get back to his Midwestern roots. Settled in to the Windy City, he still hankered for a piece of his childhood home: a good bowl of Cincy chili.

Chili parlors in Cincy are as ubiquitous as beef stands in Chicago. The lore is Greek immigrants Tom and John Kiradjieff began serving Cincinnati chili in 1922 at their hotdog stand located next to a burlesque theater called the Empress. The basic recipe, which includes finely ground beef boiled with sweet spices like chocolate, cinnamon and allspice, was tweaked and popularized by former Empress chef Nicholas Lambrinides when he launched Skyline Chili, which along with Gold Star, is one of the two most popular parlors in Cincy (though my personal favorite is the bowl at Camp Washington).

While Chili was most definitely a city thing, for Plum it was a family affair. Plum says his great-grandfather, a cop, used to frequent the original Empress after completing his beat. One night his great-grandfather allegedly asked the Kiradjeff’s for their recipe “so my wife can make it at home.” Plum says, “Back then, no one cared. No one knew how big it would be. So they gave it to him.” The recipe was handed down through family members, and now that Plum has it, he’s giving it to Chicago.

I’ve never been to the Empress, so I don’t know how close Tony’s recipe is, but I do know my Cincy chili. I had my first bowl fours years ago, when my good friends Aamir Burki and Alex Strum (a native Cincinnatian) cooked up a bowl for my wife Christina and me from a recipe from Alex’s father Barry. (In the foreward to his typewritten recipe, a gift for his daughter when she went to college, he wrote “Never forget where you came from.”)

That first bowl was nothing like the rugged testosterone-fueled and chili-infused Texas-style hunk of beef stew I’d known. It was a delicate sauce perfumed with allspice and kissed with chocolate and served over spaghetti with cheese (aka: three-way). This bowl was also the basis for a rotating series of dinners that continues five years later between our now burgeoning families which include our two sons born two months apart last year.

After that, whenever I’d get within a hundred miles of Cincy, I’d find a Skyline or a Gold Star. In Chicago, I searched, but was routinely disappointed by those claiming an authentic bowl, until I’d found the Ramova Grill’s sweet-spiced Greek-style chili.

And while the Ramova Grill version is pretty damn close, Plum’s version (I like mine five-way—which also includes onions and beans) is better. It’s got a richness and heat that no other local version has. The spaghetti is cooked to a perfect fresh al dente noodle, and the red beans on top are firm and smoosh satisfyingly as you bite into them.

The only quibble I had with Plum’s version is that the beef chunks were a little thick. Though it doesn’t make any difference to me or the flavor, most Cincy parlors serve an extremely saucy version where the beef has been pulverized to dust. Plum says this is a conscious choice, as Chicagoans are used to a meatier brew and he didn’t want to completely startle them. He expects that as things play out, he’ll work toward a finer meat grind as the business matures.