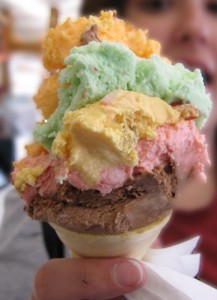 Most people are familiar with the Taylor Street Twosome, but how many know about the Beverly-Bi? The Taylor Street Twosome is the tradition of sucking down a nutmeg-spiced Italian beef, with your knuckles slathered in gravy and flecked with stray giardiniera, at the original Al’s, followed by a saunter across the street for an icy sweet-plastic-spoon dip into a wax-lined paper cup of Mario’s Italian Lemonade.

The Beverly-Bi isn’t quite so easy, as you need a bit of willpower and have to walk about seven blocks to complete it, but it’s no less venerable than the Taylor Street Twosome. But, unless you come from a long line of far Southwest Siders, it’s probably not as well known.

The “bi” begins with a stop at Top Notch Beefburger in the neighborhood of Beverly. Top Notch was established in 1942 at 925 West 79th Street by Armenian immigrants John and Asanette Soulian. The location moved a couple of times before settling in at 2116 West 95th Street in 1984 and is currently run by second and third generations of the Soulian clan.

Top Notch features wood-paneled walls, formica tables, chrome-rimmed napkin dispensers, old-school lighthouse-shaped glass salt and pepper shakers, tulip-style counter seating and a handful of Thomas Kinkadeesque oil paintings of waterfalls and random pastorals (the kind you might find in a secondhand store.) Frankly, the spot looks like the diner from Edward Hopper’s “Nighthawks” crashed into a Goodwill and the mélange of debris just worked itself out.

The restaurant also features a tall Vegas-like flashing marquee, proudly perched above the horizon. It’s an iconic, proud Southwest Side symbol akin to downtown’s Hancock or Sears towers that beckons 95th-Street travelers to some of the best post-World-War-II-era burgers and fries in the city.

The burgers are freshly ground and formed daily, griddled thin and smoky, perched atop a toasted pillowy bun and topped with a patty-hugging coat of oozy cheese, a slather of mayo, sweet grilled onions, crisp lettuce, tomato and pickle, and accompanied by a jumble of fresh-cut crispy fries, all for $5.

Here’s where the willpower comes in. After sucking down one of these classic burgers, you’ll have a mighty time turning down Top Notch’s Oreo Cookie shake as a sweet ending. You need to stay strong, and instead walk or drive the seven blocks to the terra cotta and adobe Spanish-mission-style confines of The Original Rainbow Cone for your just desserts.

Founded in 1925 by Joseph Sapp (cones were twelve-and-a-half cents apiece back then), this 83-year-old ice-cream shop makes Top Notch look like a teenager. And like Mario’s, the business is a seasonal affair, closing on December 23 and re-opening each season on March 1.

When the hot weather hits, lines queue out the door as if someone had announced a run of free pizza and beer. But there’s nothing free about it, except the way people feel when they pay and take a bite of the namesake wafer crisp cone featuring five slices of hand-paddled ice cream—chocolate, pistachio, strawberry, Palmer House (a cherry nut concoction) and orange sherbet.

Though it was invented over eighty years ago by Sapp, with its multi-color swirl and uncouth melding of flavors, the cone seems more like the brainchild of an entrepreneurial acid-tripping jam-band devotee trying to improve on Spumoni. Crazy as it is, the Rainbow cone is tasty, an antidote to the bubble-gummy blahness of Superman ice cream, and twice as fun.

JARED: the following is for the web only, so disregard

A few more southwest side gems:

Maybe the best thin crust sausage topped pie in the city. Definitely one of the most unexpected spots to find sausage fingered laborers, cops, and old chain-smoking grannies sidled up to a bar watching American Idol.

Stop in for a celebration of all things pork, and a great hoagie stuffed with fresh house made Italian sausage slathered with a spicy red sauce and sweet or hot peppers.

This spot is kind of like Top Notch Beefburger’s twin brother separated at birth. Though they feature very similar diner style old school cheap but tasty freshly griddled hamburgers, the fries are curly and thin, and the cheesy art that adorns the walls here is for sale.