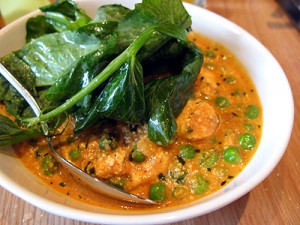 Angela Hepler-Lee is like the new Jerry Kleiner. Years after the Marche and Red Light impresario staked his claim to Randolph Street, Hepler-Lee, who opened Sushi Wabi, De Cero and now a new mod small-plates Indian spot, Veerasway, is taking it back piece-by-upscale-ethnic-piece.

Like Kleiner, who acid-tripped out the classic French bistro at Marche and brought NY Strip to class up the Kung Pao beef at Opera, Hepler-Lee specializes in taking cheap ethnic classics, be it sushi or taqueria fare, and glamming them up with luxury ingredients, a haute chef’s touch and serving the food in a mod, clean dining room.

This makes her a primary target for the serious food community, the folks who generally believe good food only comes from mom-and-pop hole-in-the-wall joints, grungy taquerias or the backstreets of Chinatown. When De Cero opened, these folks moaned over the $4 tacos and $9 nachos, and wondered why you’d ever go there when you could get a great taco for a $1.50 down the street in Pilsen.

Show me a spot to get $2 tacos with beef tenderloin with braised mushrooms or grilled ahi tuna with mango habanero salsa and I’m totally in. No such thing existed. Plus, the execution at De Cero was perfect. From house-made tortillas fresh off the griddle to piquant salsas, the extra investment was worth it to me.

In the case of De Cero, execution meant innovation and movement forward for an ancient cuisine. It also meant folks who were too scared to ford the iron bars and the grungy backroom at Carniceria Leon got a shot at tasting or discovering really good tacos Al pastor or earthy chocolatey mole sauce. As much as I argue for it, if I’m realistic, the old-school mom-and-pop ethnic joints have language and décor barriers that don’t work for everyone. I see places like De Cero as culinary marijuana, a gateway to discovering the more hardcore spots.

Charging twice as much for food regarded as a commodity though puts you in the precarious position of always having to bring your “A” game, something they always did at Sushi Wabi and De Cero. Unfortunately, at Veerasway, the tastiest things in the room are the people.

Tables are lined with models, not fake Viagra-triangle wannabes or the JC Penny catalog variety, but asparagus-stalk-legged Amazonians with smoky eyes and petulant lips. There are dudes in shiny track jackets, True Religion jeans and pointy snakeskin boots, and Hermes Birkin bags drape over the soft bench seating like languorous starlets. If you have too much self-esteem, Veerasway, where the waiters and waitresses are even too fly for junior high, is a good spot to take you down a notch.

Whether it’s mutter paneer topped with a verdant nest of greens or a trio of poached scallops back-dropped by a pale coconut sauce and topped with fried curry leaves, the platings are just as beautiful as the people. They just don’t taste as good as they look.

The curds of the fresh paneer cheese broke down in the curry sauce, sucking away all the moisture, leaving a gluey, spicy oatmeal-like dish. The peas on the other hand were super fresh, and if the chef used a more rigid cheese and kicked up the curry a bit, this would be the perfect antidote to the goopy greenish gray stuff at your run-of-the-mill Devon joint.

The poached scallops were buttery and the coconut emulsion beneath fruity and spicy, but the fried curry leaves were droopy by the time they reached our table. One bite was like chewing on an oak leaf.

Chicken Tikka Masala, maybe the most iconic Indian-English-style dish around, was all lemon with no spicy ginger or fragrant cinnamon to balance out the acid. You could find better versions at almost any Indian buffet in the city.

The Jaipur Market samosa, or spicy potato, pea-stuffed pastry triangle, was as good as any samosa I’ve had locally, and the green chile chutney was a refreshing limey, minty brew. But at $3.50, this dumpling wasn’t better than my favorite $.75 version at Kamdar Plaza (2646 West Devon).

The brightest bite of the night was a passion fruit meringue tart in a cashew crust accompanied by a swoosh of “basil seed” caviar (basil seed covered in simple syrup). While the tart was runny, the salty cashew, bright tang from the passion fruit and the sweet pepperiness of basil seed co-opted me in to slurping up the whole plate in less than a minute.

Despite the parade of missteps, the concept is promising. Touches like the creamy scallops, fresh peas, cool basil caviar and bright chile chutney, as well as the fact that he didn’t dumb the spice on the samosas, shows that chef Tyler Williams has some chops. If he can focus on the details—like tasting his sauces for balance and ensure that fried garnishes are crispy and that the paneer doesn’t break down and suck up moisture—this spot just might start swaying people its way.