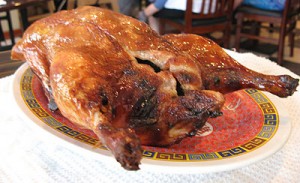 When you see a gaggle of glistening glazed ducks hanging sentry over hotel pans full of steaming tripe and bell jars filled with fried chicken skin, you know you’ve found a good Chinese BBQ spot. Actually, I know I’m probably in the minority on this one. It’s more likely most folks, who’ve come to believe their meat is born in Cryovac plastic or waxed-butcher-paper-wrapped bundles, would more likely see this scene at Sun Wah BBQ as an outtake from a Wes Craven horror flick.

Even if you get past the Sun Wah window and walk into the lobby lined with flattened corrugated boxes for wiping your feet, turn the corner into the utilitarian dining room featuring flat grayish-blue-painted walls and checkered vinyl tile and see a host of Chinese regulars spinning lazy Susans and stuffing their faces with smoky flesh, you’ll still likely want to head to the nearest P.F. Chang’s.

I know the first time I walked into Sun Wah, I was quaking in my Pumas. In fact, it’s a rare weekend that goes by where I’m not afraid of checking out some unfamiliar ethnic storefront, where I’m always afraid of asking a stupid culinary question or offending some unknown cultural sensibility. But, I’ve come to realize that if I’m not a little freaked out about fording an unknown menu, skirting through unfamiliar dishes, working through a language barrier or ignoring the atrocities of poor interior design, then generally (save the really upscale spots) a place isn’t worth writing about.

So don’t leave. I know it’s intimidating, but, please know: it’s worth it. Despite my trepidation, I almost always find a family or a cook who’s eager to share themselves and their culture on a plate, and the results are damn tasty. That’s the case at Sun Wah, where the second generation of the Cheng family, Kelly and her sister, Kendall College-culinary-school-trained Laura, are bringing great noodles, fire-roasted flesh and plenty of Chinese delicacies to the masses.

Though you can certainly dine on excellent, authentic, salt-and-pepper-infused octopus whiskers (a lot like the curly parts of calamari) or five-spice beef tripe at Sun Wah, there’s no better introduction to their restaurant than the Beijing duck service (that’s Peking duck to us Anglos). It’s like a Sunday afternoon of roast chicken, only much tastier.

If you want the best service, you should call twenty-four hours ahead to tell them you’re coming, that way they can prepare the duck, which is seasoned with garlic, salt and Chinese five-spice, to its crispiest consistency straight from of the oven.

The ducks used at Sun Wah are antibiotic-free, natural Pekins from Culver Duck in Middlebury, Indiana. Unlike many factory farms, Culver doesn’t trim its ducks’ bills, which is often done so that multiple birds can be cooped up without attacking each other. Culver keeps its untrimmed ducks separate at the hatchery and in separate flocks. Likewise, Culver ducks are vegetarians, subsisting on a diet of grains, minerals, amino acids and vitamins. In short, by eating a Culver duck, you’ll likely be steering well clear of mad cow.

Once roasted, Laura or Kelly emerge with the shiny, plump duck carcass to carve tableside, and offer up a host of traditional accompaniments including pickled Daikon radish and carrot, fresh scallion whisps, a thin, balanced hoisin (like Chinese BBQ sauce) and excellent, warm airy Taiwan-style buns.

I don’t know if the way you carve a duck says something about you, but Laura is a silent surgeon with her razor-sharp knife, while Kelly, who admits her technique is the most imprecise of her clan (she jokingly apologizes in advance if she cuts herself while slicing your duck—truth is she’s a total samurai who dissects it in seconds flat), is gregarious, and a bit of a historian. She’ll walk you through the differences between Northern- and Southern-dynasty recipes for Beijing duck (south China’s ducks are leaner, because the hot climate doesn’t warrant all that fat), and regale you with facts, like that in China they only eat the skin on the pancake with vegetables and hoisin. (At Sun Wah, they cut succulent pieces of meat with the skin.) Though the birds are tasty, because they’re so healthy, they’re a little bit leaner than your average duck. If you’re partial to fatty bits like me, the section near the tail, as well as the two belly flaps, will fill your need.

Once the bird is carved, they retire it to the back where cooks take the remnants and cook up duck fried rice and a brothy duck soup from the bones infused with bitter or mustard greens and tofu, for the table. Finally, the meal ends with a clean raspberry sorbet made from water, sugar and fresh raspberries that have been filtered to a smooth, sweet, seed-free puree. Savoring the last few spoonfuls and contemplating the great duck feast you just had, you’ll probably wonder what all the fuss was about. And to that I say, now that you’re ready, next time we meet, the bowl of fried pig intestine is on me.