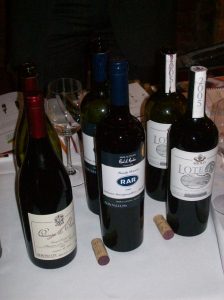 Not too long ago, the words “Brazilian” and “wine” would hardly be put together without a stern warning against a horrible hangover. Such a notion stemmed from the fact that many wines from that country—which has also brought us caipirinhas and rodizio churrascarias—were mostly inexpensively priced, mass-produced table wines that could only be found around ethnic communities for the consumption of homesick Brazilians.

Not that decent wine did not exist there—it simply had not been made available for the general public (after all, Brazilians are not exactly known for their preference for fermented grapes), and much less for export. Carefully made wines have existed in Brazil’s southern region for over a century, where Italian and Portuguese immigrants began creating their own vintages in small, family-based businesses. However, the resulting product was mostly available to restaurants or to a small niche of consumers in boutique wine shops, and almost none of that production was sold abroad.

That began to change about ten years ago, when Brazilian winemakers—well aware of the success their competitors in Argentina and Chile were having abroad—began heavily investing in equipment and personnel specifically with these previously untapped (at least for them) markets in mind.

The process to make these high-end wines available in the U.S. markets began with the churrascarias (barbecue) restaurants here, which began importing these wines around 2002 and including them on their wine lists with moderate success. “We began to notice this, and saw that there was a great opportunity at hand,” says Atlanta-based importer Gelson Cardoso. “We realized that we could have a chance to compete in price and quality with Chile and Argentina, beginning with the restaurants, and now we are reaching out to the American consumers.”

He continues, “Brazil has both the capacity and the technology to compete with our neighbors in Latin America, and I believe that soon we will be at the same popularity level that they have today.”

Turning Brazilian wine into an accepted commodity is not an easy task; Cardoso believes that the only way is by hosting tasting sessions like the series recently held in New York and Chicago. “There is no other way to do it than bringing it to the public,” he says. “We have the support of the government [through APEX, their export agency], but the best way is to have people taste and discover our quality themselves.”

Andreia Gentilini Milan of the Brazilian Wine Institute in Rio Grande do Sul also recognizes it will be an uphill battle to build the reputation of Brazilian wines. “This negative image that we see results mostly because of the kind of product that is widely found in the market back home and from what immigrants here have seen over the years,” she says. “[We believe] this will not be the case abroad, since the country only began exporting quality wines in the year 2000.”

She explains, “We are offering a new product that is different from the table wines previously found in Brazilian supermarkets. Table wines have a large market in Brazil and around the Brazilian communities abroad, but this is not the kind of product we are focusing on for export—we are bringing our best product and placing them at high-end restaurants and stores, and we are doing seminars to explain how our production works.”

Among the various wines showcased at a recent tasting at Just Grapes and at a special Brazilian government-sponsored trade event at Bin 36 Restaurant, one variety worth checking out is Salton Cabernet Sauvignon (average price $13)—thanks to its very light structure, it goes quite well lightly chilled and is an alternative to rosé over a picnic. Miolo’s Pinot Noir (average price $15) has more complexities to its nose and overall flavor, but is nevertheless food-friendly, which is a general characteristic of the wines from that country.

Although Brazil has a wide range of wineries making quality wine, only a handful—among them Miolo and Salton—are widely available in the U.S. market today, but it is just a matter of time until other brands find an importer that will help them find their way to the city’s shelves.