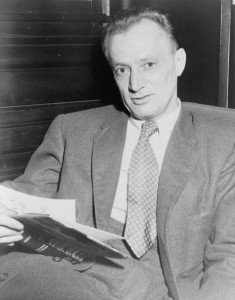 In addition to Vernors ginger ale, Joe Louis, Nelson Algren, the MC5 and of course, the automobile, John King books might just be one of the greatest things Detroit has ever offered the world. Located in an old glove factory, this is the bookstore that a city like Chicago should have, but doesn’t. Located at 901 West Lafayette Street, it’s a four-story warehouse that sits a Kirk Gibson home run away from the rusting hulk of old Detroit Tigers stadium, housing 750,000-plus used books and mountains of kitschy and rare ephemera. The twenty-five years of accumulated dust and must, which channel the funk of a grandparent’s basement, draws book hounds, including Jay Leno and Teller of Penn and Teller, from the farthest reaches of the world.

Combing through the cooking and food stacks there a few weeks ago, I located a cool edition of MFK Fisher’s translation of Jean Anthelme Brillat-Savarin’s “Physiology of Taste” (he of the famous “Iron Chef” opening quote, “Tell me what you eat, and I will tell you what you are.”), “La Bonne Table,” a fantastic collection of food and travel writing from children’s author and creator of “Madeline,” Ludwig Bemelmans, and a book with a thin salmon-colored spine that bore the words, “Nelson Algren—America Eats.”

Intrigued by all things penned by Chicago’s poet laureate of pimps and prostitutes, I wondered, might Algren have been a foodie? I imagine if he were, it wasn’t the bastardized new-wave kind that collects chefs as if they were White Sox rookie cards and attends “friends and family” tastings at every hot new restaurant. Rather, I bet Algren was of the Anthony Bourdain ilk, more likely to be smoking some local tobacco out of fresh corn cob with a Northern Michigan miner while sampling the local pasties-meat and root-vegetable-stuffed pastry pies.

It turns out, he’s a little of both. In the late 1930s Algren worked for the Illinois Writers’ Project, a local branch of Roosevelt’s Works Progress Administration. He was commissioned to collect information for the “America Eats” program whose goal was to “produce a series of regional guides describing immigration, settlement and customs as these factors related the universal language of food.”

Algren traveled throughout the Midwest interviewing cooks, gathering recipes and sampling local delicacies like Flemish Booya, or Oxtail stew, and Tin Suin Pai Kwe, Chinese pork with sweet and sour sauce. While he finished his work and produced a manuscript, it was filed away in his personal effects when the government shut the program down while it mobilized for World War II.

Algren and Szathmary became fast friends, and one afternoon in the 1970s, Szathmary stopped by Algren’s apartment on Evergreen near Damen in Wicker Park while Algren was clearing his apartment of various papers in a silent auction. It was there that Szathmary came across the “America Eats” manuscript. Szathmary bought it (Algren told him he bid too much, that it was just a government writers project he did for money) and forgot about it until Algren’s death.

When Algren died, Szathmary remembered the manuscript, cooked up the Hungarian Goulash recipe from the book and served it at a eulogy for Algren at The Second City. After that, the unpublished manuscript remained in Szathmary’s papers, which were donated to the University of Iowa. In 1992, the University of Iowa published Algren’s manuscript, with Szathmary and a few cooks adapting the collected recipes for modern kitchens.

Algren may have derided it as government work, but the book is a fascinating examination of Midwestern ethnic foodways. It features interesting etymology, including the story of how getting “stewed” became a term for getting drunk. There are sections about the box social, an event whereby the young women of East St. Louis cooked up box lunches for an auction whereby male homesteaders who bid the most for the box also acquired the company of its cook for the evening. Such events led to particular mythologies including the idea that a fancy box was usually made by a homely girl.

Though Algren’s normally gritty prose is replaced by a reverent and observant tone, “America Eats” is a fabulously readable story of the late-nineteenth and early-twentieth century culinary byways of the immigrant Midwest. Algren weaves verse and poetry into a narrative that whisks you joyfully through what could easily crumble into dry schoolbook style history.

It’s definitely a worthwhile read, especially for hobbyist food historians. Though as one can imagine, food histories don’t quite engender the kind of heat as, say, your average mystery novel, and “America Eats” has fallen out of print. Though, if you’re really interested, and you should if you love food, there are many reasonably priced copies to be found online.