by Brian Hieggelke
August 7, 2008Filed under: 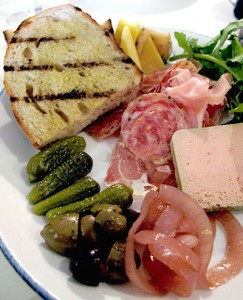 Living in a city with more than 6, 000 restaurants, why would you ever drive 150 miles to eat in a city with a population of 1,500? For me, it’s a kind of a Hillary Clinton-type thing. She was right, it does take a village to raise a child. Unfortunately for my wife and I, parents of a 16-month-old boy who believes soil is a basic food group, we left the village back in our home state of Michigan when we moved to Chicago. So when we need a break from the exhaustive process of keeping our son’s mouth free of dirt and other things you find on the average floor, we gotta go to the village.

It turns out Fennville, a one-Subway-franchise town surrounded by farmland and located two hours from Chicago and about six miles from the nearest freeway, is the perfect halfway point between Lansing, home of my in-laws, and our West Loop loft. Luckily for us, it’s also home to one of Michigan’s best restaurants, the Journeyman, our drop-off point for junior’s sleepovers, aka parental-sanity breaks, with the grandparents.

The Journeyman is a culinary dream, a destination so incongruous with its location you’re not sure it really exists. It’s the real-life embodiment of fictional isolation fantasies like the Brick bar and restaurant from the TV show “Northern Exposure” or the “Mystic Pizza” parlor. The Journeyman sits smack dab in the middle of a charming ramshackle downtown, where the tattered awning from the local video/electronics flutters in the breeze. Downtown Fennville is so small, your average little leaguer could easily toss a baseball its entire length, and locating a “gourmet” restaurant here feels like an exercise in entrepreneurial suicide.

Fennville is the kind of place where you find a mom-and-pop pie shack (Crane’s Pie Pantry in this case), not a topnotch culinary destination that features handmade charcuterie, wood-fired hearth-baked breads and some of the best farm-to-table fare this side of Chez Panisse. But owners Matthew Millar and Amy Cook didn’t worry much about that. They just put their heads down and set about their goal of creating a “fresh dialogue about food and a new ethic in cooking.”

The Journeyman is a place where the community spirit is as warm as a cup of great steamy coffee. There are places in Chicago that attempt to be like the Journeyman and come pretty close, but there’s nothing here that’s quite as pure. In Chicago, when restaurateurs talk about establishing a small family-run seasonal spot, it’s more often an exercise in PR fantasy. In Chicago, when restaurants talk about their farm-to-table philosophy, it usually means getting fresh produce and meat that’s been driven at least a few hundred miles from surrounding farms in Indiana, Michigan and Wisconsin.

When the Journeyman puts a chicken leg on the menu and girds it with oozy dill flower and squash risotto and a zingy red-beet-and-cassis vinegar reduction, that chicken was raised ten miles away at Providence Farms in nearby Saugatuck. Salad greens, tossed with blue cheese, scallions and truffle-oil vinaigrette, come from Eater’s Guild, a veg and fruit farm located in Bangor, Michigan twenty miles away.

The sausage is house-made and studded with fennel. The creamy foie and chicken liver pate slathered on the wood-fired, homemade crostini melts in your mouth and is served alongside Armandino Batali’s salumi, Paul Bertolli’s sausages and a selection of pickles and cheese.

Rustic presentations here aren’t garnished with frilly bullshit or molded in ridiculous shapes. There are no chemical stabilizers in the bourbon maple gastric paired with juicy Creswick Farms pork tenderloin and belly.

Though Chicago is a town of pizza, we are more a town of stomach-distending deep-dish slices and wispy, bubbly Neapolitan-style crumb. Though Burt and Pequod’s come close, we don’t quite have the perfect Sicilian airiness of the square wood-fired crust topped with the rich, funky blend of aged parmesan, provolone and “Fumicata” mozzarella cheeses served here.

Simply put, even if you don’t have a demanding dirt-eating toddler that you plan on dropping off with the grandparents, you should make the drive to Fennville and eat at the Journeyman. You could also make a side trip to peruse the nearby art galleries in Saugatuck or play on the shore of Lake Michigan in South Haven, but once you stop in at the Journeyman, you probably won’t want to leave.