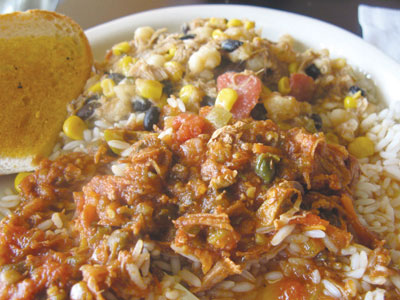 Normally, when I write a restaurant review, I try to avoid indulging in blow-by-blow course descriptions, poor adjectives and Architectural Digest-style décor treatises, a feat I like to call the “Pat Bruno.” Instead, I try to look for the story behind the restaurant, personal memoir spurred by dining at the establishment or a cultural context in which to put the food. But I was so appalled by the experience and the food at YATS Cajun-Creole Cuisine, a new Chicago location of a popular quick-service Indianapolis-based restaurant, I’m having a hard time avoiding a hyperbolic damning diatribe. Eating there last week was the worst dining experience—and that includes trips to the now-shuttered Bennigans—of my career as a food writer.

The story is that Joe Vuskovich was a wunderkind restaurateur, operating two spots in New Orleans by the time he was 19. He parlayed that success into a spice wholesale business, eventually going back to the restaurant game with YATS. The name, though it sounds more like what I wanted to do (yack) after eating there, actually comes from his self-described status as a “yat.” On his MySpace page, Vuskovich says that “yats” are a particular breed of New Orleanians that “talk in their own language, have their own schedules they follow separate from the world and eat their own particular style of food. The common greeting ‘Where y’at?’ is where they get their name.”

After Vuskovich opened YATS in Indianapolis, a local magazine dubbed it the “city’s best Louisiana comfort food” and the New York Times calling the fare “excellent.” Unfortunately, the hubris of such accolades spurred Vuskovich to open a new location on one of Chicago’s best restaurant strips. Based on my first visit though, I doubt even if he opened in one of our many food deserts he’d have much luck.

If the New York Times sends someone to cover the new Randolph location, the YATS folks better hope they send their poorest indiscriminate college intern. The space painted in a pukey Tequila-Sunrise-orange with its new leather banquettes sloppily dripped with said paint, dingy Indy 500 checker-flag-style floor covered with institutional runner mats, glass chandeliers and retro concert posters is pretty much straight-up frat-house as imagined by an interior designer who has had far too many Hurricanes or Hand Grenade cocktails on Bourbon Street. If YATS represents any part of New Orleans, it’s the tourist-fueled “beads and boobs” aesthetic of the central French Quarter. It says a lot when the most tasteful or interesting thing in the joint is a vintage Liberace concert poster.

Culturally speaking, YATS is truly unique in that unless you count the Cheesecake Factory, Chicago has never really had a pan-Latino-Cajun-Creole-cheesecake restaurant. But, as anyone who’s ever ordered the chop suey from the last page of a “War and Peace”-sized menu at a “family” restaurant knows, “pan” anything is almost always a recipe for pan-horrible. While YATS does keep their menu limited to nine daily specials, it’s a confused assortment that includes Cuban-style ropa vieja, Mexican pozole and a Creole, Cajun and Frito Lay hybrid known as chili-cheese crawfish etouffee. It seems the only real criteria for making it on to the menu is the ability for a dish to withstand hours moldering away inside a slow-cooker.

In fact, I’m guessing, outside of the YATS “kitchen,” there hasn’t been this many slow cookers gathered in one spot since a 1950s cocktail party fueled with Swedish meatballs. After you place your order, a dude, who in a pre-Netflix world would more likely be manning the local Blockbuster video counter, scoops out oozy mountains of whatever you requested from the cooker onto oval plates along with a bit of rice. He tops those starchy masses with French bread that looks like it’s been slopped Jackson Pollock-style with the neon orange oil drippings from the grease trap of a Buffalo Wild Wings. Frozen Pepperidge Farm Texas Toast never looked and tasted so good.

The peanut-butter-colored chili-cheese crawfish etouffee was runny, gamy, sour and punctuated by flavorless chewy crawfish tails. Though the spice level was admirable, the jambalaya was punctuated with desiccated andouille sausage, and the rice was so gloppy, were you to hurl a spoonful at a passing car, you’d likely break its windshield. The pozole was perfumed with the one-note limey essence of hominy pounded in to split-hulled submission by the relentless heat of the slow cooker. The ropa vieja did include tender shards of chicken, but they were slathered with a horrid metallic tomato essence. I’d tell you about the dessert, but since the NY and Turtle cheesecakes they offer aren’t quite Cajun specialties, we skipped them. You’d expect a bourbon pudding or a bananas foster cheesecake variation at least. It’s not all bad news though, because YATS is BYOB (at least for now), so you can afford to drink enough to forget the meal you just ate.

I’d be more inclined to take the review seriously if the reviewer could use “hubris” correctly. Maybe colors are his strong suit.

Nope. Haha this is bitter for reasons I dont know, but Ive never experienced any of this. This is ridiculous.

Yeah yats is pretty good. I mean i’ve had other mass market Cajun/creole food like j gumbos and it was awful. Yats however is actually flavorful and seasoned correctly. Its a must eat whenever i go to my hometown of avon and i can only pray they expand further.

so yeah your wrong and everyone give yats a try.

Couldn’t disagree more with this review. Been eating at Yats for over 14 years and never had a bad experience. Very consistent, very delicious food.

I really cannot understand this take. My family, and the many guests we have driven to Indianapolis to try it, LOVE Yats, and particularly the chili cheese crawfish etoufee. The reviewer does seem needlessly hostile. It’s just food, buddy. And really good food, at that.

This review is about useless. I’m no expert is this line of cuisine, but i will say I LOVE Yats, and have enjoyed a few different dishes. At lunch, you can’t get in the place. So apparently, every day, there’s a long line of people waiting for lunch who have no taste. I guess they all know nothing and this reviewer has all the answers.

This is the most bias, ill intended, not objective, and worst food review I’ve ever seen. It is sad the author would choose to have so much fun while destroying an entrepreneurs dream. The food is good and the hot sauces are great. They have vegetarian options, the rice is never hard enough to break a freaking window, and the style is fun and cool.

Came to write a review of this review and it looks like the comment section has already done the work for me. Terrible review. This writer has some bias or weird I’ll intent toward this humble restaurant which I might add has some of the best Cajun food I’ve had and yes I’ve been to New Orleans.