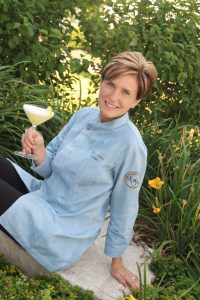 Bridget Albert has gin in her blood. Albert, the chief mixologist for Southern Wine and Spirits and the co-author (with Mary Barranco) of the newly released “Market-Fresh Mixology, ” from Surrey Books, is a fourth-generation bartender. Her lavender-eyed great aunt Tilly started the string by hopping behind the family tavern in Coal City, Illinois as a 12-year-old. Bridget’s then 10-year-old great grandmother soon joined Tilly and became a fixture in the street, hand-chiseling ice off the old delivery trucks with her fierce ice pick. Albert says, “My great grandfather used to get scared when he saw his wife running around with that pick.” The family lived above the tavern, and Albert’s great-grandmother would occasionally manage the tavern by peeking through the knots in the rickety floor down to survey the bar room below.

As a 16-year-old boy, Albert’s paternal grandfather, a Polish immigrant living on the East Side of Joliet, gathered up the gin made in his mother’s pot still, borrowed a car from an Italian family, and drove up the back-roads to Chicago selling the hooch during prohibition. He’d pay off policemen along the way while working the speakeasy circuit, often landing at the still-extant Green Door (678 North Orleans).

Albert got her own start as a cocktail waitress at the Empress River Casino in Joliet, but as she says, “I didn’t have the ability to flirt with the ugly old guys.” One day a bartender called in sick, and she asked if she could jump behind the counter. She loved it, and steeped in the lore of her family history, dedicated herself to being the best. She pored over classic tomes, many given to her by her grandmother, including the “Mr. Boston” guides.

She moved to Las Vegas, where she met Tony Abou-Ganim, then the head mixologist for the Bellagio. She was inspired by his success and talent, and approached him, saying, “I will cut your limes and schlep your garbage. I just want to learn.”

Under Abou-Ganim’s mentorship, Albert eventually earned a shot as the first American woman to compete at the Bacardi Martini Grand Prix, often considered the Super Bowl of bartending. You’re only allowed to enter the competition once, so Albert practiced her signature drink, the 1862, an aperitif made of Martini and Rossi Bianco vermouth, Orange Curacao, lemon juice, passionfruit puree and a splash of spumante (the drink is named after the founding year of Bacardi) four hours a day for four months. She took home a silver medal, a feat that caused her disbelief. During the awards ceremony they called her name, and her husband nudged her and told her she won. She responded, “Nah, that must be somebody else.”

In 2007, Albert faced Abou-Ganim in the first-ever Iron Chef Cocktail Battle alongside Mario Batali and challenger Robert Gadsby. Inspired and blessed by the opportunity, she says, “Tony and I both started to cry. We were hugging each other and the producers were like, ‘Hey, this is a battle.’”

Being such a successful cocktail shaker also has its hazards, though. Every weekend party and backyard BBQ becomes a busman’s holiday, as friends and family always want the expert bartender to mix their drinks. Albert says, “Sometimes I just want to sit down and have a beer. I’m off the clock.”

In response, Albert decided to create a recipe book dedicated to the “non-bar geek,” so her immediate circle would finally have a manual to hone their skills. She says the book, “Market-Fresh Mixology,” is a “love story to my friends and family who love great cocktails, but don’t particularly know how to make them.”

And while the book’s recipes are very accessible (they were tested by her co-writer Barranco and family and friends), the guiding principle of the book—that all the drinks should be market-fresh or seasonal—is relatively revolutionary. Most cocktail books are gimmicky dictionaries along the lines of “1,000 Martinis to Soothe Your Depression” or “Five Cosmos for Your ‘Sex and The City’ Party.”

Albert’s recipes, like the Spiced Beet (a nod to her Polish roots) or the Savory Avocado Margarita, are based on farm-fresh produce and organized according to the seasons. Albert’s style is a reflection of growing up with fresh produce in a farm community in Shorewood, Illinois. She says, “We just got a Target. My family had a tab at the local store.”

Albert’s also a student of history, and the book is littered with anecdotes of the origins of many classic cocktails, so if you don’t know Tom Collins from Phil Collins, you will now. And if you’re one of Albert’s friends, you better start studying up, because for her there’s only one measure of the book’s success. “I’m hoping I go to my friends’ houses and they make me a great Mojito,” she says.