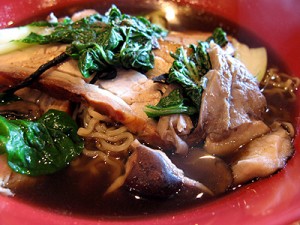 Urban Belly, Chef Bill Kim’s new Avondale noodle and dumpling house, is decent Asian food for unadventurous pseudo-foodies and hipsters with money to burn. Of course, you wouldn’t know it, as most of the local-eater-and-journalist set are drooling in their noodles and falling over their Twitter and blog-software interfaces and Yelp postings anointing it as the Second Coming.

I imagine many of these folks are too steeped in the lore of Chef Kim, the former Charlie Trotter disciple and executive chef of Le Lan. Here’s a guy who’s stepped down from his gourmet pedestal to bless the masses with an “affordable” take on soul-satisfying Asian comfort food and the Korean treats of his youth. It’s a pretty tempting legend. Walk in to the cave-dark confines, compliments of a drab paint job, of Urban Belly, and you’ll see Kim manning the pass with his black hair flopping over a “Karate Kid”-like Daniel-San do-rag, calling out table numbers and slurping on noodles to taste before he expedites his creations.

There’s also the legend of Momofuku, David Chang’s similar NYC concept, to contend with. Though we’ve got members of the New York food media dubbing Chicago the first city of cuisine now, Chang’s noodle emporium has been hotter than any single restaurant, save maybe Alinea, in the national press. I’m guessing many of the food-obsessed have secretly longed for our own local Momofuku, so we could lord it over any and all comers that there’s nothing Chicago doesn’t own. Kim’s spot seemed the logical anointee. I’ve never been to Momofuku, but if Urban Belly is truly like Chang’s spot, then Chang’s success represents a supreme golden fleecing of American food media.

It’s not that the food at Urban Belly isn’t good. It’s that it’s just not great. You expect a chef of Kim’s pedigree and experience to harness balance and seasoning better than anyone else. A great broth is supposed to warm your stomach, shake your knees and rock your palate. As Escoffier said in his legendary “Le Guide Culinaire,” “Stock is everything in cooking… Without it, nothing can be done. If one’s stock is good, what remains of the work is easy; if, on the other hand, it is bad or merely mediocre, it is quite hopeless to expect anything approaching a satisfactory result. The cook mindful of success, therefore, will naturally direct his attention the faultless preparation of his stock…”

Kim’s Crab Udon seems to suffer from mediocre stock. While the tiny scallops on top of the bowl melt in your mouth, and the crispy fishcakes and fresh greens are exquisite, they mask a one-note under-seasoned crab broth that displays only a hint of sweetness. There’s no powerful roasted crab-shell musk or even enough salt or spice to tantalize the tongue here. Kicking it up with the tableside chili sauce and soy helps, though the noodles in the bowl were limp and lacking any kind of punchy freshness.

The pork belly ramen in pho broth was better. The noodles were firmer and fresher and the hunks of pork here sported a gamey funk emblematic of the best farm-raised pork. This is the kind of touch you won’t get on Argyle street. That being said, while the broth perfumed with anise and clove notes in this case, was much more soul satisfying and richer than the udon, it is exactly the kind of thing you can find in a good hot pot in Chinatown or a pho on Argyle street, and often for half the price. The seasonal kimchi here rings in at $4 and isn’t any tastier than the free version you get at good Korean BBQ joints.

The argument for pricing at a place like Urban Belly is that those more “authentic” spots aren’t usually using the quality of ingredients that Kim is. It’s a reasonable argument, though I’m not sure it’s completely applicable here. We’re not talking foie and caviar. While the Argyle and Chinatown spots might not be buying their pork from Gunthorp or their veg from the superstar local farms in Wisconsin, go to any local Asian market and you’ll see, unlike Americans who are OK with ethylene-gassed tomatoes, the Chinese and Vietnamese cultures prize live animals and verdant fresh greens. At the good spots, broths are still getting made from freshly butchered non-industrial animals.

Those who prize trendy ambiance, and generally I don’t since you can’t eat it, will certainly be happier, as there’s not a wobbly formica table or a live hanging animal in sight, and the rustic wood communal tables, which look like they may have come from the set of “Survivor,” are pretty cool.

Matching the décor in terms of modern luxury, the Lamb and Brandy dumplings served over a bed of fresh edamame are very tasty. The wrinkled wrappers were delicate and slathered in a satisfying and aromatic blend of spicy chilis, toasted cumin and fennel, while the meat was tender under a greedy fork. Since I do believe man can live on dumplings alone, they are worth the visit.