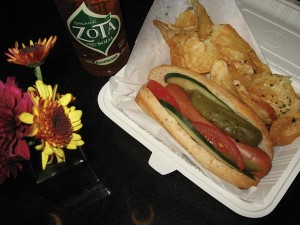 Hotdogs and liverwurst: two things I wouldn’t eat as a child. My aversion to eating hotdogs stemmed partly from wondering what the heck was in them. Since my mother told me “all beef” meant any part of the animal, this aversion lasted into my adulthood.

Recently, I passed Drew’s Eatery and noticed his green leaf logo and “organic hotdogs” sign. Was this an oxymoron along the lines of “military intelligence,” or could these hotdogs really be healthy? I decided to bite into one—a fire-roasted red-pepper, jalapeno-pepper, organic-chicken and turkey-sausage one, to be exact. Surprisingly, the hotdog was delicious as well as oh-so-healthy. I decided to talk to the owner and learn more.

Andrew Baker got the idea for Drew’s Eatery during his corporate career. He previously worked in new-store-development for the Corner Bakery, and opened ninety-seven of their restaurants across the U.S. During a two-year stint in San Francisco, he stumbled on a small organic hotdog shop called Underdog. Impressed with the concept, he decided to give up his corporate job, resettle in Chicago full-time and open his own restaurant. He knew Chicago was “a great hotdog city,” and he was happy to rejoin what he calls “old Chicago—a diverse mix of young couples, older people and families starting out—where people are loyal to their neighborhood.”

For him, the ideal neighborhood was Lincoln Square. There, right across from Welles Park, is where he wisely plopped down his restaurant a mere three months ago. The location brings him considerable foot traffic: parents who make a beeline from the playground with their children in tow, youngsters who drop in after playing Little League across the street, couples who seek refreshment while listening to summer concerts in the park.

After finding his location, Baker, 45, focused on his restaurant philosophy. “There are three things I wanted to keep in mind,” he says. “I wanted to be sure I was as local, as green, and as organic as possible.” He buys many of his meats and cheeses from local sources. His serving containers are made of biodegradable corn, and his tile and furniture fabrics are made of recyclable material. He does not sell any beverages that come in plastic bottles. He only buys food from farms that practice organic processes—i.e., no pesticides, hormones or antibiotics.

There is a fourth principle to his restaurant philosophy: simplicity. “We only have five different hotdogs—beef, vegan, pork and two chicken-turkey.” The organic hotdogs range from $3.69 to $4.49 each. They are supplied by Applegate Farms, Tofurkey and Organic Prairie. Each hotdog is topped with a thick organic tomato wedge, pickle slab and cucumber slice. The eatery also carries three homemade soups, though Baker may add more soups for the winter. By keeping his menu short and simple, he feels he can provide a top-quality dining experience.

As far as dessert, Drew’s Eatery carries nine flavors of organic ice cream from Traderspoint Creamery in Indiana. Baker toured the creamery and enlisted their help in designing his store’s flavors, which include mango and blackberry. One scoop of his naturally flavored ice cream costs $1.99. If you want it in a cake cone, add forty-nine cents, in a waffle cone, seventy-nine. He also sells chocolate cupcakes with raspberry puree frosting ($3.29), vegan blueberry bars ($3.29), flower power cookies (99 cents) and other tasty desserts from  of Glenview.

Feng shui principles guided Baker in designing his store. Clean lines, tall green plants and tiny vases filled with orange daisies keep the atmosphere upbeat and positive. His nieces and nephews gave him the impetus to keep children in mind, so he added “a McDonald’s Playland on a much smaller scale.” His kid’s corner features an Etch-A-Sketch, a wienermobile he found on eBay and a selection of books including “Where’s Waldo?” and “Urban Babies Wear Black.”

Baker believes in the importance of becoming part of the community, so he contributes gift baskets to school silent auctions and gives fifteen percent of his summer sales from Tuesday nights to the Welles Park Playground Association. He also donates fifty percent of his cash tips to the Organic School Project, which works against obesity by teaching children how to grow, eat and cook organic.

Canned pork and beans may not be organic, but they were considered a simple food in a 1970s advertising campaign. A television commercial for Van Camp’s Pork and Beans featured song lyrics that said, in part, “Life’s simple pleasures are the best. All the little things that make you smile and glow.” In a current YouTube video about San Francisco’s organic Underdog shop, a stuffed Chihuahua wears a “Yo Quiero Underdog” sign. I think someone could combine these two sentiments, and film a Chihuahua wearing a “Yo Quiero Drew’s Organic Hot Dogs” sign to a soundtrack of Ashley Tisdale singing “Life’s Simple Pleasures are the Best.” I’d actually prefer Amy Winehouse as the singer, but I don’t think she has any simple, clean energy at the moment.