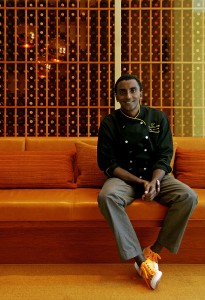 If, as restaurant lore suggests, many chefs come from the ranks of artists, bandits and miscellaneous misfits, then Marcus Samuelsson, executive chef of C-House and Marc Burger at Macy’s is, by comparison, a prince. The youngest chef to receive three stars from the New York Times, he’s also an entrepreneur, a TV personality, a cookbook author and a tireless ambassador for Swedish and African culinary and cultural heritage. He’s as much an intellectual as he is a master culinary craftsman. More importantly, those of you who read my burger round-up a few weeks ago know he also makes a mean grilled patty. Samuelsson was in town last week to work on some new dishes at C-House and I caught up with him to see what’s on his mind.

You opened up Merkato 55 (in NYC) which honors your African heritage, and of course you’re famous for Scandinavian cooking at Aquavit which honors your Swedish upbringing. Is cooking in one particular discipline more satisfying? You were born in Ethiopia, but maybe you have more nostalgia and memories of growing up Swedish since that’s where you were raised?
Africa will always be a part of me and Sweden will always be a part of me. They are also both minority cuisines. Their stories have not been told as many times as Italian or maybe French [cuisine]. People still have that curiosity. What is it? What could it be? [The cuisines] give me a chance to tell the curious customer the story about food from an angle they might not have had before.

Some people suggested that you should have focused on one region of Africa, say Ethiopia, as opposed to cooking pan-African cuisine at Merkato? Tell me about that decision.
It’s always interesting [the difference] between the people who go to restaurants and people who communicate about restaurants. In order for anything to work, the mindset of the customer has to be “I want to go there and have a good time.” The customer doesn’t necessarily sit and analyze. I see the smiles on the people that come and go at any of my places, and that’s what I count. I look at African food as pretty much where Asian food was for Americans about twenty years ago. The knowledge of the average American for regional ethnic African food was not that high. That’s why I felt the umbrella or larger focus [was important].

You’re an example of how the far the reach of a chef has come in our society. Is there any limitation or have you ever been disappointed by the opportunities afforded by cooking? Another way to look at it is, even though you’re still relatively young, you’ve been a cook for twenty-two years, most people want to retire after doing something that long. Do you?
My perspective is I came to this country with $300 and I come from a pretty humble background. Food has taken me beyond my wildest own visions, and it will continue to. I don’t look at it as limitation. Food has so many different entrances. It could be whether I’m giving a cooking class out in the countryside in Ethiopia. It could be that I go to a daycare in a rough neighborhood to teach the average guys how to fillet fish. I will always work with food and people. People are food. At Marc Burger, I’m working with cooks who don’t have the experience I do. But you connect with that guy, and the guy’s a better cook than he was six months ago. As long as I keep working on it, I’ll always be excited by it.

A lot has been made about the fact that you were the youngest chef to earn three stars from the New York Times as a 24-year-old. You went to cooking school at 16 and so you’d already been cooking for eight years. It wasn’t like you were a normal 24-year-old, right?
In anything, you’ve been given a certain amount of cards and then it’s what do you do with them. There will never be a chance that you’re ready and the opportunity is there, and someone announces, “Hey, we’re ready for you, go and grab it.” You have to always be ready. I was ready at 21. I wrote down my stuff and I cooked my stuff whenever I could. It’s just preparation, preparation, preparation.

You talk about Charlie Trotter as someone who inspired you.
Charlie was really cool to me at a time when nobody had to be cool to me at all. Part of this industry is about giving access to each other. He showed me Arun’s. I’m like “WTF is this?” I’d been to Bangkok by then, but I never had food like that.