by Brian Hieggelke
November 20, 2008Filed under: 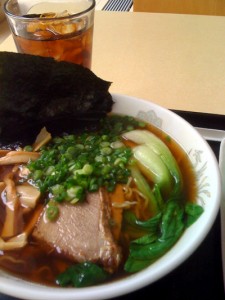 This weekend, I was chowing down in a mall food court and Tommy Hilfiger was foremost on my mind. It was as if I were reliving my junior high glory days, those times when my mom stuffed me and my posse into the back of our teal Lincoln Town Car, aka the “land yacht” (a nod to its two-and-a-half-Chicago-parallel-parking-space-inhabiting body length) and dropped us off for a parentless afternoon to unleash mayhem on the mall.

We’d spend the afternoon parsing through the latest Z Cavaricci’s or flashing white suburban N.W.A.-inspired gangster poses while trying on fresh LA Kings or Raiders hats at the Foot L ocker. Cavaricci gave way to Girbaud or Guess and eventually a phase worshipping the wares of the aforementioned urban prepster Hilfiger and his country-club cousin Ralph Lauren.

The low point of my laughable label obsession arrived in the form of a $300 Polo sweater depicting a knitted teddy bear outfitted in a reflexive ursine-Lauren-like sweater. Stewart Smalley wouldn’t have been sensitive or stupid enough to wear the thing, and here I hankered for it as a symbol of the ultimate in high-school chic. Though I begged my folks for it mightily, they never caved. To quote Garth Brooks: “Thank God for unanswered prayers.”

Tuckered out from the fashion grab, those days we often headed for a food court outfitted with the usual suspects like oozy Cinnabons or fake-parmesan-doused breadsticks from the Pizza Hut Express. If we were particularly flush with allowance, the aspirational choice was cheddar-doused spuds served in a wax-coated paper cup and griddled beef hoagies from the Great Steak and Potato Company.

These days, while Great Steak still lives, my mall-food-court grazing isn’t quite as pedestrian, at least not when I’m at Macy’s on State Street. Over the last year or so, I’d been making it around the place one kiosk at a time. Rick Bayless’ killer huaraches at Frontera Fresco and Marcus Samuelsson’s juicy patties at Marc Burger have both gotten positive nods from me. (And just so I know it’s not some anomaly, my wife ordered a burger this weekend at Marc Burger and it was just as good as the last one I had. I stand by my assertion that this is one of the best burgers in the city. And Bayless was meeting with his kitchen staff while we were there too, proving he’s no absentee toque.)

This time around, I stopped in at Noodles by Takashi from the James Beard Award-winning Takashi Yagihashi, chairman of the eponymous haute hood hangout in Bucktown. I’d been tough on his gourmet operation for its lack of value, but his kiosk at Macy’s offers the ultimate in cheap eats, and maybe the ultimate in upscale chef-driven noodle joints.

Noodles by Takashi offers a spectrum of pop-Asian delights from spring rolls to pork buns to steamy soups. I settled for some Shoyu Ramen, a kettle-sized bowl of broth. I tucked in to the thing and worked my way through star anise-perfumed pork, toothsome broth-coated veggies and silky noodles, until only a dinky little puddle was left. As the micro-broth spots on my shirt could attest, the bowl was slurptastic.

This bowl also reinforced my disappointment in the value of the soups I had at Bill Kim’s Urban Belly in Avondale just a few weeks before. Takashi was charging $9 (downtown no less), while Kim $13 for what was essentially the same thing. Kim’s pork was slightly better and probably of higher quality, but I preferred Takashi’s noodle texture, and that his pork was seasoned with five spice, rather than overwhelming the whole broth as at Urban Belly.

While sucking down the bowl, I’d heard that Tommy Hilfiger was in town and about to light the Great Tree about a hundred feet away in the Walnut Room. Sated on good well-priced noodles, and intrigued at spotting a glimpse of the inspirational haberdasher of my youth, I headed on over. A group of festively garbed Dickens-novel-worthy carolers made their way through the Christmas canon, while I craned my head a couple of times, jostled for a prime viewing position and eventually decided it wasn’t worth the wait.

I wish you could take this as a metaphor that just as I’d reformed my bad food-court ways that my decision to spurn Tommy Boy meant that I was clearly over my label obsession. But, a few moments earlier I’d spotted a cool baby blue toddler-sized long-sleeve Polo rugby and bought it for my 19-month-old son. I’ll protest that it’s because I really love the new distinctive multi-colored super large Polo logos (Lauren’s re-tooling his brand by imitating the successful Louis Vuitton/Murakami collaboration). But, when I really think about, the hyper-steroidal-sized logo is kind of a billboard that partly says, “My dad is a label-whore.” Clearly, I still have some bad habits to work out.