by Brian Hieggelke
December 3, 2008Filed under: 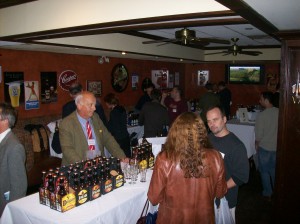 France is well known around the world for its champagne, fine wines and cheese (among other delicacies), but somehow the beer produced there has never really gotten much publicity Stateside. That has happened mostly due to the popularity of Belgian, German and Dutch brews, which have pretty much dominated the market of imports on this side of the pond in spite of the fact that France is one of the leading nations in the production of brewing barley in the entire planet.

That is poised to change, as many small producers in that country have come together to promote their own craft beers in the US with the support of The French Embassy’s trade agency. Last October, several of them showcased their product during an event at New York’s House of Brews and also in Boston aimed to attract distributors, tastemakers and members of the press to their product.

“We have noticed increased sales for craft beers, imported beers and microbrews over the years—it’s a niche which is growing considerably in the US,” says Jean-Jacques Giard of Brasserie Duyck. “However, French beer hasn’t got the image it deserves, as roughly ninety percent of French beers are in the hands of big international groups like Heineken and so forth.”

“We have about twelve-to-fifteen small craft breweries who are trying to improve the image of French beer, and it’s quite a hard job because France is considered as a country that produces champagne, wine and so on,” explains Giard. “When it comes to beer, people think about Belgium, Germany, The UK or the US. However, the fact is that we are working very hard to produce great beer.”

At the New York event, several small producers—many of whom have yet to score distribution deals in the US—conducted a tasting of more than eighty varieties of beer, going from simple blonde brews to ambers, stouts and even a handful of sweet, flavored beers like Verte du Mont Blanc, an apple-green-shaded beer made from glacial waters off the slopes the mountain of the same name.

“The feedback has been very good, and people really liked it,” Giard says. “Americans are very nice people, and they said that the beers were fantastic. Here in France we are working towards moving things forward a bit faster in that market.”

“We are definitely keen on working on the main markets even though it’s difficult,” he continues. “That makes the breweries to realize that they have to work together to create a better image of French beer—so far that image is very poor, and nobody knows what we are producing, except maybe for some beer connoisseurs—otherwise, no.”

Asked about what characteristic differentiates French beer from its other European counterparts, Giard told us about Biere de Garde, which is produced in the northern part of the country. Often sold in a corked champagne bottle (the region is conveniently located a mere fifty miles from the winemaking region, so those vessels are plentiful there), the name translates as ‘”beer to be kept.”

“Fifty years ago, we had 2,000 breweries in northern France that were produced during winter because they didn’t have the equipment for cold fermentation, so during winter they could control the process, and we used to sell it in summer, when it was hot,” he recalls.

“So we used to brew the beer and keep it for weeks in kegs, and we have kept that tradition—it’s beer that is kept after fermentation for at least four weeks,” he explains. “Beer, as you know, is not like wine—nothing happens after fermentation, but still we realized that if we keep it for a while it gets better. There is no scientific explanation for that, but somehow it just tastes better, and that is what makes French beer different from German, Belgian or English beer.”