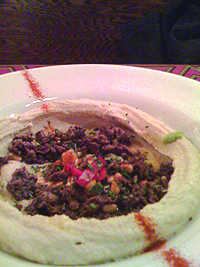 Judging by the cover of Britney Spears’ “Toxic” by Israeli-French singer Yael Naim playing over Palestinean café Chickpea’s sound system, the Arab-Israeli conflict doesn’t have much purchase here. That’s no surprise, though,as pretty much everything here is a touch askew.

The Genie coin-op pinball machine in the corner rigged for free play is possessed with a sticky right flipper and almost all of the songs that play while I eat are covers, including what seems like an impossibility: a more plaintive, cheesy version of John Waite’s “Missing You” than the original. Though, apparently Steve Perry is cheesy enough, because “Don’t Stop Believin’” is featured in all of its original arena-rock glory.

But just as American pop culture is interpreted through the Middle Eastern graphical prism, the food at Chickpea is sometimes inversely reinterpreted against the backdrop of the Elvis-and-“Speed Racer”-tinged, Western-influenced childhood of owner Jerry Suqi (Sugar, La Pomme Rouge).

Chicken kabobs are made with Amish poultry and Laham ma hummus is topped with juicy bits of charcoal-smoked tenderloin rather than spit-roasted lamb shawirma and girded with pulpy dollops of spicy jalapeno. The familiar chickpea puree is four-star-restaurant-kitchen creamy.

Then again, this ain’t your corner kebab shack because they make a few modern nods to American culinary tastes, but precisely because half of the dishes are so authentic, rustic staples of the Palestinian family table, that most Middle-Eastern restaurateurs who never go beyond falafel (undersalted and in need of more cumin and coriander here) and baba ghannooj would be afraid to serve them.

Maybe the best dish, reminiscent of the Golubki or stuffed cabbage of my own first-generation-Polish childhood, is the Malfoof, cabbage leaves rolled with herbed rice, minced lamb and garlic, drizzled with a touch of lemon. There’s none of the sulfurous funk emanating from these rolls as they did in my youth and the cabbage-leaf wrappers here are so creamy that they ape the tenderest of pasta-based dumplings.

And while my own babcia (Polish grandmother) isn’t in the kitchen, Jerry Suqi’s mother, Amni, is. The hijab-clad Suqi matriarch is everywhere, often hovering in the dining room, ministering to the hungry masses like a culinary Mother Teresa, offering an encouraging pat on the shoulder, navigational guidance through her menu, or a tart granny smith apple wedge to soothe a truculent toddler.

It’s no dog-and-pony show either. The night we were there, Amni Suqui, fresh off making a batch of Malfoof, sported a freshly burned hand coated in ointment from a minor kitchen mishap. And while I doubted she painted the sumac on the plates in mod horizontal lines as they do here, she claims these are the same recipes she made for Jerry and his siblings, all who seem to work here in some capacity from manning the cash register to running food tableside.

As warming as the food and Amni Suqi’s omnipresence is the interior design of Frank Adorno. The kaleidoscope glint of metal-trimmed chandeliers, the golden-flocked stencil, a lush purple wall and the deep dusky wooden banquette form a comforting bulwark against the harsh squalls of swirling snow on a hard Chicago’s night.

Ultimately the best restaurants don’t try to be all things to all people, but instead honor the vision and personality of their owners. And, Chickpea is a monument to the generosity, creativity and warmth of the Suqi family. Then again, personality isn’t always enough. Last time I wrote about this space when it was The Painted Lady Organic eatery, I’d also lauded the honest refreshing vibe emanating from the Garcia family (Bleeding Heart Bakery and Chaos Theory), and then it shut down a week after my review. I hope the story is different this time around and Chickpea doesn’t get smashed into hummus and become another economic casualty.