by Brian Hieggelke
January 20, 2009Filed under: 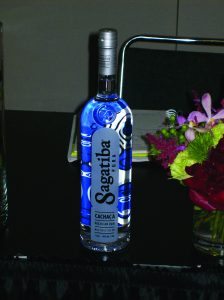 While I was living in Brazil as an adult in the 1990s, the liquor known as cachaça was regarded as a poor man’s drink found only in corner botecos (dive bars) where a shot could be purchased for as little as fifty cents. Broke youngsters and college students would buy a cheap bottle in order to make homemade caipirinhas in spite of the horrible hangovers that would follow.

I remember that quite well—as a perennially broke student in my college years, I often found myself with an empty pocket. But only a few bucks were enough for the cheapest of poisons.

Today, however, cachaça is reaching a more refined audience thanks to the efforts of a handful of dedicated companies that have done a lot to bring the spirit to a higher level. “Cachaça is today in the same position that vodka, chianti and tequila were about fifteen years ago,” explains Steve Luttman, producer of Leblon, one of the more recent brands specially created for the international market. “The images of these three categories were dramatically changed in quality and presentation via Absolut or Grey Goose for vodka, Antinori for chianti and El Patron for tequila—each of these brought a better product to the market with much superior sales and marketing.”

“The general public has a perception that cachaça is a low-quality beverage that will give you a hangover,” explains New York-based Olie Berlic, who is the unofficial ambassador of the Brazilian spirit and producer of premium brand Beleza Pura, created specifically for the U.S. market. “If you look at what is found in the market, you can say that this is a true assertion.”

“For a great number of cachaça producers, by what I saw and tasted in Brazil, price is more important than quality,” Berlic says. “Due to the volume of production in Brazil [about 396 million gallons per year, according to statistics published by USA Today], there is a very large market, but the percentage of premium product is only about two percent of that. What happens is that most producers end up making something more affordable, and this helps to perpetuate the concept that this is a low-quality spirit.”

Berlic, who traveled to Brazil and tasted more than 800 kinds of cachaça before he was able to find the flavor and quality that he sought, says that he had a clear idea of who was making quality product or who was just mediocre. “Brazil has the capacity of making spirits of great quality—the biggest problem is the demand and the fact that most are in the business to make money—without the demand, many producers believe that there is no advantage in making a premium spirit because it will not translate in sales—at the time I made my research at the end of 2001, I was surprised that no one was making quality un-aged cachaça.”

“The market for Brazilian rum is growing more every day,” explains Matti Antilla of Cabana, one of the latest brands to emerge in the United States. “The growth has been intense in numbers that reach about fifty percent a year, and people are paying more attention because premium brands are more present today than the industrialized brands that were more common in the U.S. before.”

Among the newcomers are Beleza Pura, Sagatiba (one of the few premium brands also available in Brazil), Leblon, Cabana and the more traditional Ypioca, who recently launched a premium line to their roster.

“The idea of what cachaça is in the U.S. is completely different of what you see in Brazil,” Antilla says. “In this country, you are bringing something completely new to the market—the public does not know its history, and the stigma you find in Brazil does not exist. What happens here is that people are discovering a new premium beverage without knowledge of what existed in the past.”

Promotion has been very important—more recently, there have been various tastings and events in various places like The Blue Water Grill, Just Grapes and Sushi Samba. “It is also very important to change Americans’ cultural perception of Brazil,” says Kathryn Kriegel of Sagatiba. “Through our brand, we are also promoting the music, movies and architecture of the country to show that Brazil has a lot of art—not only sports and carnaval.”

Other brands are working in a similar direction by connecting the product to Brazilians’ playful nature. “Our target audience are legal drinking-age youngsters up to thirty-five years of age who have a certain affinity to our country, “ explains Aline Telles, export director of Ypioca, the country’s pioneer in introducing cachaça to foreign lands.

This doesn’t mean that it has been easy. “It is very hard to create a new brand anywhere in the world, and it is especially difficult in the U.S.,” says Luttman. “The barriers are huge, and the competition is obscene. To launch a new brand in the U.S. market, three factors are of great importance: first, the concept cannot be good, it has to be perfect. The execution has to be done with a knowledge of marketing and sales, and the level of investment in advertising is considerable.”

The monetary investment can be quite large, according to Olie Berlic. “We put in more than a million dollars in development,” he says. “There are brands like Leblon (which is aged and bottled in France) that spent as much as twelve million dollars.”

There is also the bureaucratic side of the process, which can be complicated. “It is especially challenging to bring an alcoholic beverage to the U.S., specially a spirit,” explains Luttman. “Each state has their own local laws which require separate distribution contracts. In addition to that, in almost twenty states, the local government controls the distribution and sales themselves. In Brazil, the barriers are equally difficult, but mostly from a tax point of view. The export paperwork can be complicated as well, but we have a specialized team in Sao Paulo and Santos [the country’s main port] that makes the process easier.”

The efforts have been worth it. Today cachaça can be found in the best liquor stores, bars and restaurants in the country. “Leblon can be found in all fifty states, and is also present in the cocktail menus in markets like Los Angeles, San Francisco, Chicago and other major cities,” Luttman says. “The same is true about Ypioca, Cabana, Beleza Pura and Sagatiba.”

To find out more about Sagatiba Cachaça please visit us here:

and come and share the Pure Spirit of Brasil here:

Cachaca is marketed in the US as Brazilian Rum for a reason – the distillation process is quite similar to rum, and the origins are pretty much the same. The key difference between rum and cachaca, though, is that rum is distilled from the molasses, while cachaca is distilled from the fresh sugar cane juice. The difference would be in the nose — while unaged rum smells like sugar, cachaca has more of a juice-like smell. When aged, cachaca retains the juicy smell but the flavors are hard for novices to tell apart, though.