by Brian Hieggelke
January 27, 2009Filed under: 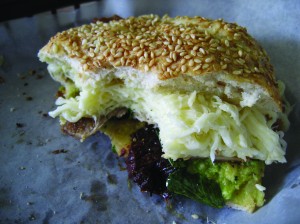 Unless you want to be branded a Detroit-Lions-like Super-Bowl-party-throwing loser, you better stay away from the powdered French-onion soup-mix dip this year. Sure, all your friends suggest that the real reason they come over is for your drunken bonhomie and so they don’t have to talk to their cat when they make fun of bad commercials that cost so much that you could bail out a small auto-maker or a mortgage bank with their budgets. But, watch your guests closely and you’ll likely spot a grimace when they spy an appetizer table flowing with cream-cheese-and-veggie-slathered Pillsbury-dough veggie pizza or a crusty tomato-topped jar of Pace picante. But don’t despair, beleaguered ball-lovin’ brethren, in these tough economic times, there are still plenty of affordable tasty party-eat alternatives.

Little Hotties, Take Me Out, 1502 West 18th, (312)929-2509
Though Buffalo wings are a perennial favorite, we believe that chowing down on the tired Buffalo wing gives tacit approval to the Buffalo Bills’ Super-Bowl-losing ways. And trust us, giving up the treasured neon-orange-hued treat invented at Buffalo’s Anchor Bar won’t disappoint the city anymore than Scott Norwood’s Super Bowl XXV wide-right missed field goal with eight seconds left. Better to back a true champion and Super Bowl XL MVP like the Korean-American receiver Hines Ward, who despite a nagging knee sprain is expected to play in Sunday’s big game. The only proper way to salute his courage is raise one of these spicy, garlic-soy hot wings originally invented on a mostly Korean stretch of Lawrence Avenue by Chinese immigrant Nai Tiao at Great Seas restaurant. Best of all, owner Karen Lim and her cooks remove one of the wing joints and push all the meat up to the top—lolli-pop style—so you can keep one hand free for that sloshing suds-filled Solo cup while you dine.

Lumpia and Tocino, Isla Pilipina, 2501 West Lawrence, (773)271-2988
Speaking of Lawrence Avenue, this storefront puts out a Thrilla’ in Manilla-quality egg roll, aka lumpia, or succulent deep-fried fingers filled with oozy garlic-slathered pork, along with a citrusy dipping sauce. A party tray of 100 ($25) might sound like a lot, but no one’s counting calories on game day and rest assured these crispy golden batons will disappear like McDonald’s French fries. Of course, nothing follows a serving of pork better than more pork, and you’d be remiss if you didn’t also walk out of here with a heaping portion of Tocino, deep-fried pork nuggets glazed in a sweet smoky sauce touched with a hint of what tastes like (though they assure me the goose liver gets nowhere near the glaze) foie gras fat.

Sheet pizza from Italian Superior Bakery, 933 South Western, (312)733-5092
Sure Domino’s will be there in thirty minutes, but after one bite of their cardboard crust and substandard sauce, you’ll be regretting your decision for thirty days. Avoid the Noid and hit Superior Italian Bakery instead. Founded in Ozone Park in New York City back in the 1930s and relocated to Chicago’s Little Italy in the 1940s, SIB is more traditional than the Arizona Cardinals’ losing history and the Pittsburgh Steelers’ winning ways. These days, only the second family to ever own the place, the Saccamenos, are making touchdown-worthy bakery-style sheet-tray pizzas. While we got no beef if you top yours with onion and sah-sidge, we implore you to check out the basil, tomato and fresh ricotta (made by a local neighbor lady).

Cemita Atomica from Cemita’s Puebla, 3619 West North, (773)772-8435
Everyone needs a sammie at their Super Bowl party, but not just any sinking submarine will do. Try the cemita atomica, a porcine dream of breaded, thinly pounded, deep-fried pork cutlet, a slice of lean ham, spicy chipotle-drizzled enchilada and fresh mozzarella-style string cheese from Oaxaca piled on a freshly baked sesame-studded roll. Despite the fact that pork fat runs in equal flow with the blood in my circulatory system, know that I laud the sandwich not for its piggy way, but because it is truly one of Chicago’s best.

Dessert Donuts from Old Fashioned Donuts, 11248 South Michigan, (773)995-7420 and Glazed Donuts Catering, glazedchicago@gmail.com
For those of us who grew up on crullers culled from commercial bakeries like Dunkin Donuts, the deep-fried apple fritters at Roseland’s Old Fashioned donuts dripping in tooth-enamel-threatening glaze will make your heart sing or give out, whichever comes first. The fritters are so big, just cut them like apple-pie wedges and enjoy. If your crew is looking for more of a one-stop drinking and eating option, Kirsten Anderson of the underground handmade donut factory, Glazed Donut Catering, recently cooked up some Irish Car Bomb and Champagne Chambord (raspberry liqueur) donuts for New Years. While her flavors change each week (Maple Bacon and Chinese Five Spice chocolate last week), maybe if you ask really nice, she’ll whip up a Miller-Lite-malted version for you.