by Brian Hieggelke
April 4, 2009Filed under: 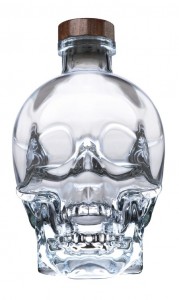 Of all the celebrities who endorse a premium line of liquor, Dan Aykroyd isn’t usually the first that comes to mind. Yet that doesn’t keep a few hundred of his fans from zigzagging through the wine section at the South Loop Binny’s. The SNL alum is promoting his new premium vodka Crystal Head, which comes in a skull-shaped bottle.

“There he is!” someone at the end of the line shouts as the crowd bursts into applause. Aykroyd smiles and waves at nobody in particular as he is escorted through the crowd.

While one fan dresses like Aykroyd’s iconic Elwood character from “The Blues Brothers,” other fans best remember him from his “Ghostbusters” days. Bridget Barnett is so enamored by Aykroyd that she kisses his hand when she gets to the front of the line. He returns the favor while he autographs a photo from the film.

“You were very young,” he says to Barnett, referring to how old she must have been when the film was released. Barnett actually missed her chance to see it on opening night when she was 3 years old because she tripped while standing in line and ended up in the emergency room. Regardless, she says that she’s been a “lifelong fan ever since.”

A few minutes after meeting Aykroyd, the magnitude of her encounter starts setting in. She turns to a friend. “Oh my god, he kissed my hand,” she says. “I’ll never wash it again!” (Katie Fanuko)