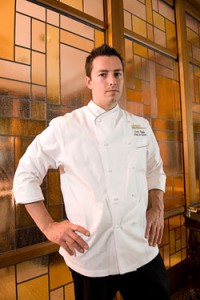 Last week, Food & Wine magazine revealed their annual “Best New Chefs” in America list, and despite Chicago’s rising culinary status, none of our local chefs got a nod. In fact, no chefs from the Midwest made the list. That being said, there’s no shortage of kitchen talent in our fair city, so we decided to stage our own “Best New Chicago Chef” competition.

We invited seventy-five of the cities top toques (many former Food & Wine Best New Chef winners), sommeliers, artisans and food experts to participate in a write-in poll naming their choice for Chicago’s best new chef. The only criteria was that voters should not name chefs who’d won the award from Food & Wine magazine in the past. Sixty of the seventy-five folks we invited cast their vote, leaving us with the following top five:

The top five accounted for fifty-one percent of the total vote with the remaining votes fragmented over seventeen other candidates. Having recently dined at Avenues and enjoyed one of the best meals we’ve ever had, we agree with the popular opinion on Curtis Duffy. Formerly of Alinea, he’s forging his own identity with organic, intensely complex presentations of great tasting food. Like Grant Achatz, who left the French Laundry and broke out as a national food star at Trio, we expect Duffy may be Chicago’s next big thing.

It’s hard to quibble with other candidates on the list, although we’d probably move Rob Levitt (he finished sixth) of Mado up the list. Levitt’s proven he can rock at any level (formerly Le Titi De Paris, North Pond, Del Toro) and though he’s chosen to cook in an informal rustic setting, his execution is extraordinary.

Also of note, excepting Chris Pandel, the top-named chefs all man fine-dining-style restaurants. It seems that fine dining and savory cooking are still the standard for a “Best New Chef.” Looking at the remaining results and seeing the few votes for Jason Hammel and Amalea Tshilds of Lula Café, Efrain Cuevas of Clandestino, Shin Thompson of the BYOB hot spot Bonsoiree and Michelle Garcia of Bleeding Heart Bakery reminds us that being an executive chef at a high-end establishment shouldn’t be the only criteria for a “Best New Chef.”

We credit the success of spots like Boka and 160 Blue as much to Giuseppe Tentori and Michael McDonald as we do their pastry counterparts Elizabeth Dahl and Stephanie Prida. Likewise, we spoke extensively with Hammel of Lula last year and found him to be one of the most thoughtful chefs we’ve ever met.

Homaro Cantu gave us even more perspective with his choice (we told chefs they could cast their vote directly and tell us why they made the choice if they didn’t care about anonymity), Moto’s dishwasher, Juacinto Rengal.

At first we thought Cantu was being his usual press-baiting self (and he probably was), but he said of Rengal, “He understands seafood better than anyone I know and I would put him up against Eric Ripert and Laurent Gras. He was born on the coast of Baja Sur and spent his entire life fishing and cooking. If you want, you can watch him handle some skate wing, the dude knows his shit.”

He’s right. Ultimately the top toques like anyone else don’t get where they are without standing on the shoulders of others. They just happen to be the public face of hard working brigades. Who knows? Since Food & Wine has that whole chef thing covered, maybe next year we’ll take on “Best New Restaurant Support Staffers.” (Michael Nagrant)

This was a great story, Mike, and introduced me to a few names I’ve never come across before. I will definitely research them to see what they’re all about.

I’m also going to look up that Food & Wine story to find out what the hell went wrong this year that they couldn’t feature ANY chefs from the Midwest.

And thanks, as always, for giving props to those who truly deserve them!

I read that article quickly over lunch today from the house copy of the mag but wasn’t Laurent Gras on that list? Or was it just his restaurant on the where to dine now list? I can’t remember but it was in that issue somewhere. And was the only shout out to Chg at all. Pathetic.

Oh scratch that last comment. It wasn’t the best new chefs issue I was reading. It was the May travel issue. Doh! Must’ve been the Spacca Napoli pizza that rendered me stupid.