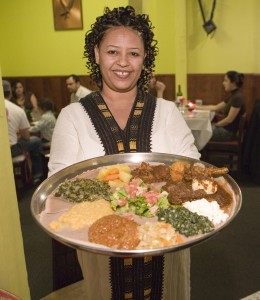 A large painting of a warrior hangs on the west wall at the Ethiopian Diamond restaurant. I ask my friend who it is. “That’s Towedros. He united Ethiopia.”

“But where’s Menilek?” he demands to know, and scours all five large paintings. Menilek, Demesew Admassie explains to me, defeated the Italians in 1891. It was the first time an African nation had defeated the European colonizers. Ethiopians are very proud of their history.

So that is why you can order Doro Wete, drink a glass of honey wine, linger over coffee and incense, and be dining as people have done for thousands of years.

Almaz Yigizaw, the chief cook and owner of Ethiopian Diamond—her name means diamond in Amharic—grew up in Gondar and learned to cook from her grandmother. To this day, she judges her cooking on whether it tastes just like hers.

The most popular dish is “Taste of Ethiopia,” either vegetarian or with lamb, chicken and beef. The food is displayed on a big platter, and diners must tear off a piece of thin bread and trap the morsels they want to eat. According to an ancient custom, if you feel particularly close to someone you will place a bite in their mouth.

The most traditional meal is Doro Wete, a seasoned chicken dish served with hard-boiled eggs. The chicken must be a freshly killed hen. It is divided into twelve parts and slow-cooked with vegetables and seasonings in a clay pot. Sometimes Ethiopians will order the stronger version, more highly seasoned and tougher to chew, almost like a jerky. I ask Almaz how long this dish has been served in her country. “As long as there has been an Ethiopia,” she says. 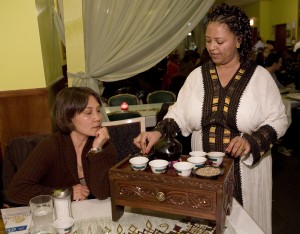 Almaz imports the seasonings and butter from her sister who still lives in Gondar. She also imports the grain for the “enjara” bread, and the coffee, from Kaffa, where coffee beans were first cultivated. When there are enough people, you can watch the full coffee-making ritual, which involves roasting the beans over a fire, grinding them, preparing the hot coffee, and pouring into your cup from the earthen cooking pot. Coffee is always accompanied by incense.

In 1982, Almaz and some friends thought they were fortunate to be admitted to America under the immigration quota system, because their country was undergoing some internal turmoil. They were sponsored by Travelers and Immigration Aid, and ended up on Chicago’s far North Side. Almaz graduated from Senn High School (one of the most linguistically diverse schools in the country) and attended Rockford College for two years, until two brothers and a cousin arrived and she joined them back on the North Side. She worked at Allright Parking, then at Northwestern’s Norris Center, and attended classes at Loyola.

She was on the board of directors of the Ethiopian Community Association when the Chicago Bears sponsored an entrepreneurial training course. Her final paper, developed with classmate Sisay Abebe, included a survey of where Ethiopians lived and how much business would be needed to sustain a restaurant. She was particularly impressed when two students at Northwestern’s Kellogg School of Management told her “This plan will work!” And in fact it has. It’s been featured on television and in several publications. She bought out her partner two years ago, but remains the chief cook.

Almaz hopes that experiencing the restaurant will sometimes lead to a deeper interest in the history and culture of Ethiopia. And Ethiopia has a truly amazing history. We talked about recent DNA studies which indicate that some 100,000 years ago, it was the starting point for the spread of modern-day humans to the far corners of the world. Much later emperors ruled both Ethiopia and Egypt.

In the year 1,000 B.C., Emperor Menilek the First was said to be the son of King Solomon and the Queen of Sheba. His descendents ruled Ethiopia for almost 3,000 years. In 1896 Emperor Menilek II defeated the Italian army for the third time, leading to formal recognition of Ethiopia as a sovereign state. Hailee Selassie, the last emperor, is worshipped by the Rastafarians of Jamaica. 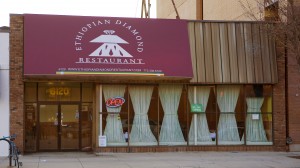 Almaz found the paintings for the walls at an Ethiopian exhibit at the Art Institute. There is a portrait of Lalibala Castle, one of eleven churches hollowed out of stone. She grew up a half block away, she says. There is the portrait of Tewodrus, who united Ethiopia in 1855, and brought peace and fairness to the nation. There is a painting of modern day Addis Ababa. There is also a portrait of the Axum Church, where they say the “Arc of the Covenant” is still hidden away, brought from Israel by Emperor Menilek. Almaz confirms it is closely guarded by a priest, who must choose his successor before he dies.

Almaz speaks Amharic, the ancient Semitic language thought to be closest to how Jesus talked. My friend Demesew Admassie and Almaz attend the same Orthodox Ethiopian Church. The priest there, in his eighties, really knows the Bible, Almaz says.

As we are leaving, she assures Demesew that she has asked the artist for a portrait of Menilek.