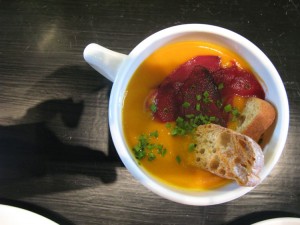 If Chicago’s newest gourmet sandwich shops Birchwood Kitchen in Wicker Park and Lunch Rolls in the Loop were twins, they’d be Julius and Vincent Benedict from the 1988 film, “Twins.” In case you’ve forgotten the plot, and really who could blame you, Julius and Vincent were the product of a secret experiment to create the perfect child from six different fathers. While the exercise spawned the superior intellectual/physical specimen of Julius (Arnold Schwarzenegger) it also created a fraternal twin, Vincent (Danny Devito) made from the leftover genetic garbage.  Neither Birchwood nor Lunch Rolls is particularly deficient like Vincent (in fact they’re both pretty decent options for their respective hoods), but as sandwich-slinging brethren they’re definitely opposites.

Lunch Rolls is a low-slung bunker of a restaurant filled with grim Loop-dwelling business folks hunkered over their sandwiches. The collective ennui of patrons, cashiers, some of the line cooks (save for the cheerful expediting chef who looks a lot like former Soul Coughing front man Mike Doughty) is so powerful, not even the gleaming sky-blue tile and the peaceful trickle of the wall-mounted waterfall feature (remnants from the previous incarnation as Spa Café) seems to combat the gloom. Top toque Luke Chenier, former partner in the underground dining/BYOB sensation Bonsoiree, ambles around the open kitchen looking slightly tired.  The menus are photocopied and the fifties-style graphics (one which features what that looks like a hip Brylcreemed Ronald Reagan) plastering the walls are graphic-design clichés.

Birchwood Kitchen, on the other hand, is your classic café, an inviting, clean, well-lit spot. It’s filled with the usual complement of happy Wickster’s (Wicker Park hipsters) on the hunt for sustainable, local eats, sipping Metropolis java amidst distressed wood counters, rustic wood tables, a calming two-tone blue-paint scheme, and a bevy of lazy slow-whirring silver-blade fans. The menus here are stylish typographic specimens printed on thick off-white card stock. Birchwood’s helmed by a former Pastoral fromager, the amiable and proud Daniel Sirko.  His tattooed, do-rag, tight vintage t-shirt and baseball-cap-wearing crew is basically a mirror image of the patrons. Watching them practically “whistle while they work,” you get the sense that there’s some kind of weird mind experiment going on here spawning the kind of freaky cheerfulness you always find in Potbelly and Trader Joe’s employees.

If you subscribe to the idea that you can feel “the love” from the kitchen, you’d expect Birchwood to be the slam dunk here. Surprisingly, though not by much, Lunch Rolls makes the better sandwich. Here, spicy tender shards of Morrocan lamb are tucked in to a golden-crusted French-style white roll and cooled with sweet bursts of golden raisins and slightly overcooked, but still satisfying, pearls of couscous. The mouth-searing Cajun Shrimp jambalaya is larded with fat-satisfying hunks of chicken and sausage, while creamy parsnip soup is infused with a sweet roasted garlic soul. Smokey whitefish is decent, but requires a lot more of the sweet but parsimonious pour of honey mustard vinaigrette than I got. The biggest quibble here is that the bread is good, but not great, and that flavors skew a little peasant-fueling heavy.

Birchwood gets the nod on the bread front by offering a bevy of toothsome hearty sourdough and multi-grain options. There’s also a clean purity of flavor in pickled condiments and homemade cheeses and artisan meats that you don’t find in Lunch Roll’s richer preparations.  The “Blue,” featuring flat grilled sourdough piled with luscious pink-tinged roast beef, golden caramelized curls of onion and oozy brandied blue cheese, is kind of like a luxuriant Donald-Trumping-up of the classic patty melt.  The beef could use some salt and pepper. The same under-seasoning befalls a rich carrot soup punched up by spicy ginger and cut with surprisingly delightful pickled beets.  With a bit of salt from the tableside shaker it’s perfect.   The “Speck,” smoked prosciutto on ciabatta, is excellent, but there’s not one funky whiff of the advertised truffle oil, and the celery root cream needs, surprise, more salt, and a touch of acid, maybe a lemon spritz, to offset the richness.  The pillowy ciabatta is also too thick and needs to be cut down to achieve a better bun to meat-and-cheese ratio.

Despite the shortcomings of these new spots, they are much better than the sad Subways and mediocre McDonald’s alternatives nearby.  But, in a perfect world if I could do some “Twin”’s-like tinkering of my own, I’d take the gourmet chef-like understanding of seasoning and balance of Chenier at Lunch Rolls and mix it with the attentive commitment to local topnotch artisanal ingredients and pure flavor at Birchwood to create the perfect sandwich shop specimen.

We had lunch here yesterday and loved it. The custom-made salmon sandwich was so great I duplicated it for dinner (substituted the salmon with a mahi mahi “burger” from whole foods). Definitely will be back!

I hear Lunch Rolls was recently closed. Last time I went to Birchwood, it was packed. I guess there is a winner in this battle.