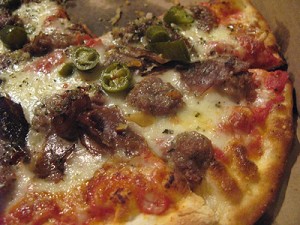 In my fourteenth year I had the good fortune of befriending a teenage entrepreneur and a crew of stoner pizza makers. The entrepreneur, my buddy Mike, was the proud owner of a lucrative paper route as well as a premier lawn-care business in Shelby Township, Michigan. Even before Mike could drive, he had a fleet of commercial walk-behinds and tractors, and a shiny trailer to haul them. He was generating mid-five figures while I was still begging my mom for quarters to secure Slurpees at 7-11.

But, thanks to my pops, I’d instead been privy to junior-high movie nights and occasional second-base-rounding make-out sessions with the young ladies (ironically the first of those girls is now Mike’s wife—sorry, dude). But, no thanks to my dad, I was broke. A night at the Lakeside Mall AMC was not a cheap affair, nor was the price tag on that pair of Rossignol 4SK skis I coveted. I needed a job.

Thankfully, Mike, always restless, added pizza-making to his newspaper and lawn-cutting duties, and had vouched for me too, and I secured a spot on the line at Jimmy’s Pizza. Though it was the early nineties, Jimmy’s was straight out of Richard Linklater’s “Dazed and Confused.” Foghat’s “Slow Ride” or Led Zep’s “Stairway to Heaven” was on constant rotation on the boombox. My fellow pizza dudes all had long greasy tresses, and drove land-yacht sized Chevy Impalas and modded-up Mustangs. They drank more Milwaukee’s Best than a frat house and smoked more weed than Snoop Dogg, sometimes with off-duty local cops, who often fixed the occasional speeding ticket in return for free ‘za. These pie-slinging pirates traded stories of their conquests, referring to ladies’ parts as “trim,” as in “I scored some trim last night,” and daydreamed of owning their own parlors someday.

One guy, Jamie, had a little more ambition than the others. He’d actually made it through a few years of film school before dropping out. He took me under his wing and schooled me on Sayles and Scorsese. Each weekend I was given homework, which I dutily viewed in my bedroom on a thirteen-inch rabbit-eared television hooked up to a VCR the size of a microwave.

Jamie wrote scripts on the side, pitched their premises, and urged me to start writing. My first effort, about HIV-infected buddies who go on a cross-country trek to visit famous people’s grave sites, was worse than an episode of “Baywatch.” I am a writer in some small part because of Jamie’s stoner cinema mentorship. Not a food writer mind you, as the idea of getting people to pay you to write about eating seemed as audacious as a skinny black kid with a funny name getting elected president of the United States. But wanting to capture the absurdity of those years as things unfolded compelled me to sit down and do the deed, eventually leading to my current occupation.

And because I am a food writer, I found myself standing in Paula and Monica’s pizzeria on Chicago Avenue in West Town a couple of weeks ago, searching out another lead. Like Jimmy’s, Paula and Monica’s is a takeout and delivery affair. There are no cushy booths, white-and-red-checked tablecloths or wooden walls filled with weak immortality grabs in thousands of carved initials. It’s pretty much stainless steel shelving and dudes flying around in their aprons tossing dough. Other than the monstrous apothecary-worthy Bell jar filled with crispy cannoli shells, it is almost a copy of where I toiled as a teenager.

But, frankly, the pizza at Paula and Monica’s is better than the stuff I used to make. While it’s not authentic New York-style, nor does it claim to be, the thin crust here is probably one of the tastier intermezzos native New Yorker’s will find between trips back to Grimaldi’s and Lombardi’s.

As a now-stalwart Chicagoan, though, I’ve devoted myself to their “Combo” pie topped with fresh garlic, shiny roast beef scrims, sausage hunks and fiery giardiniera for the last three weeks. It’s an Italian beef for people who hate Italian beef. In fact I’m not sure I really prefer Italian beef over this pizza version, and I love Italian beef. Oh, and those cannoli shells on the counter? They fill them to order, ensuring the creamy sweet-ricotta-stuffed pastry stays crispy.

Just as good as the food: as I stood in the lobby at Paula and Monica’s, I caught a familiar waft of mingling tomato, sweet onion and garlic, and toasty yeast. And just as when I hear “Slow Ride” on the radio, that whiff conjured up memories of my five summers slinging sauce at Jimmy’s like it was yesterday.