Congressman Harold Washington and labor leader Charles Hayes were seated at table 14, Izola White recalls, when Washington told her “I’m going to be mayor, and Charlie’s going to take my place.” And so it came to pass. Many times Mayor Washington and Congressman Hayes dined again at Izola’s, 522 East 79th Street. Theirs are the first two portraits you see as you enter the main dining room.

There are a number of soul-food restaurants with fine fare and proud histories, such as Army and Lou’s, and Edna’s. But my friend Richard Barnett brought me to Izola’s on a Saturday morning, when judges, lawyers, politicians and professionals gather for food and conversation. Richard was greeted by friends at almost every table as we made our way toward the back, with several lengthy exchanges. As we were about to sit down, Richard engaged then-Illinois Senate President Emil Jones in a brief, formal conversation. Over bacon and eggs, Richard confided, “I just talk to him because I know he doesn’t like me. He’s a regular.” Richard is a reformer. He has helped seventeen judges get elected and was a key player in Washington’s 1983 victory.

On the east wall are large portraits of Harold, Charlie Hayes, TV reporter Russ Ewing and Emil Jones. The back wall is a pantheon of African-American heroes, from Frederick Douglass to Martin Luther King and Malcolm X, from heavyweight champions Jack Johnson and Muhammad Ali, to Eartha Kitt and Aretha Franklin, Ray Charles and the Tuskegee Airmen. On the west wall there are mostly country scenes. Izola was born and raised in the small town of Kenton, Tennessee and learned to cook from her mother. She still refers to the fare as “country” food. 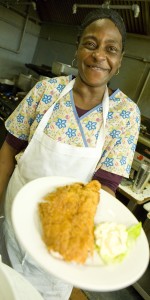 Asked what are her best dishes, she lists short ribs of beef, stewed chicken and dumplings and fried chicken. What about my favorite, ham hocks and greens? Yes, she says, that’s good too. Richard likes the salmon patties. Izola described how she prepares her sweet potatoes to Saveur Magazine: “You add sugar (no water!), butter, cinnamon and nutmeg. You cook for a long time on very low heat.”

Izola came to Chicago in 1940 and worked in a department store, and then as a waitress in a soul-food restaurant. She was able to save up $800 dollars to start her business in 1956. “It’s been fifty-two years,” she says. Chatham was a changing neighborhood then, and “white folks were throwing bricks.” At the time there were only three black-owned businesses along 79th Street: a barbershop, a tavern and a drug store. “I was the fourth,” she says.

She cooked, she waited tables, “I was the whole staff,” she says. Mostly she cooked bacon and eggs and pork chops for breakfast, and roast beef or liver and onions for dinner

Now she has two storefronts, three cooks and a lengthy menu. She’s there every day, as she has been from the beginning.
When Washington was a congressman, he made Izola’s his first stop when he returned from D.C. His favorite dish was salt pork and eggs. “He was a good man,” Izola says. “Everybody loved him.” Later, after he’d been elected mayor, “when he walked in, everybody would start calling out ‘Harold,'” his rallying cry from 1983 on.

She notes with pride that she has held four political fundraisers: two for Washington, at her home and at the restaurant, and one for Charlie Hayes and one for former Illinois Appellate Court Judge R. Eugene Pincham when he ran for mayor on the Harold Washington ticket in 1991.

What about Barack Obama? For now there is that cardboard cutout of him at the front of the main dining room, and more art is in the works. Jesse Jackson Jr. brought him there the first time, some ten years ago, Izola says.

Very interesting! It’s nice to hear about the history and the cultural significance of a restaurant along with a review of the food. I plan to check out Izola’s this weekend.

Very interesting! It’s nice to hear about the history and the cultural significance of a restaurant along with a review of the food. I plan to check out Izola’s this weekend.