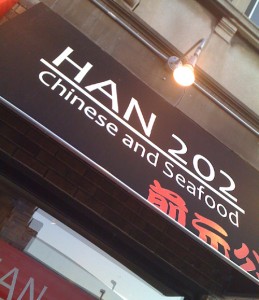 The Bridgeport blue-hair mafia is not happy. This gathering of neighborhood ladies bedecked in sweatsuits, tattoos and cut-off jeans who came in search of “an egg roll and some good fried rice” is expressing confusion over what a “tasting menu” is and disgust over Han 202 restaurant’s “extraordinarily expensive” $20 price tag (for five courses). After a bout of sighs and bickering, they decide to stay, but spend the next ten minutes having their waitress discuss the relative spice level of all fifteen entrée choices.

The thing is, who could blame them. Not only does Bridgeport not have a restaurant like this, but there’s nothing like it in all of Chicago. Eclectic (along with phenomenal and to die for) are probably the most overused expressions in all of food reviewing, and yet there’s no better word to describe Han 202. Chef Guan Chen and his wife Yan operate so idiosyncratically, they make the peculiar Schwa look like as professional as Charlie Trotters.

Han is a five-course tasting-menu-only BYOB pan-Asian French New American fusion restaurant. It’s as if a hurricane picked up elements of Alinea, Opera and a grungy regional Chinatown spot and smashed them all into this old school brick and vinyl awning Chicago storefront on West 31st Street.

The dining room is outfitted with typical Asian restaurant conceits including a Zen rock garden and a looming Buddha-head sculpture. However those obligatory nods are punctuated by mod sharp chandeliers and micro-suede button upholstered wingback chairs. The bar front and doorways are accented with an industrial non-skid stainless steel that you’d more likely find on a Nine Inch Nails concert stage set.

The service is four-star fawning. Silverware is replaced after each course, and wine and water is refilled as soon as you filch a few sips. When you leave your seat, your napkin is refolded, and the kitchen won’t send out a course lest it get cold while you’re away. And yet, while the stemware is elegant, the chopsticks are the wooden break-apart jobs you get with your average sushi-delivery order.

Oh, and did I mention the truism that if a restaurant has a number in its title it probably sucks? One of the primary reasons for this is that usually a number corresponds to lack of creativity on the part of the owner. No idea what to call your spot? Hey, let’s use the building address or yesterday’s winning lotto numbers. 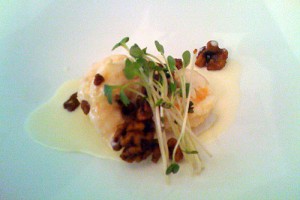 That is not the case here where the “202” refers to the year in which the 400-plus-year reign of China’s Han Dynasty was established. It’s appropriate because the Han dynasty is often thought of as the birthplace of modern Chinese cuisine, where techniques of fermentation were first harnessed to make the wonderful steam buns we covet today.

While pan-Asian fusion usually connotes confused middling dishes that misrepresent their origins, most everything at Han 202 is better than what you’d find at most Chinese-, Japanese- and Thai-only restaurants.

Rich stir-fried beef perfumed with lemongrass, ginger and garlic is brightened by a julienned nest of green apple.

Duck breast is spice-rubbed with a grill-master’s acumen and cooked to a melt-in-your-mouth medium-rare and topped with a light (read not an MSG-filled brown glop fest) Sichuan hot-bean sauce.

For dessert, vanilla ice cream and sweet tomato sorbet are paired and punched up by a pungent sprig of thyme that is an unlikely-but-complementary flavor combo of Grant Achatz-like proportions.

After eating such good food, the professional-food-critic devil on my shoulder is still grasping for some kind of construct to explain this place. How could a spot that breaks so many rules, honors far too many taboos and indulges in a fair bit of surface cliché be such a good experience?

I’m still not sure, but, that cabal of cantankerous old ladies who five minutes ago thought an “amuse” is what you do with yourself at Six Flags and not a complimentary course sent out by a chef to start a meal, is sucking down an amuse bouche of little neck clams in white truffle sauce. They’re licking their fingers, and scooping up the sauce with the empty shells with the abandon they probably reserve mostly for an Al’s Italian beef. I suppose that’s all I need to know.

[…] out Michael Nagrant’s rave, which put Han 202 on the foodie radar, and Mike Sula adds some details in this week’s […]