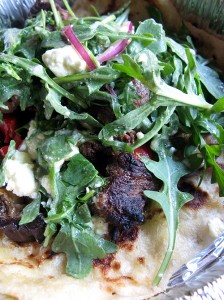 Zebda, a new tiny Algerian take-out spot in Irving Park, is the kinda place you’d likely drive by without a second thought. Unless you’re a cabbie who hangs out at owner Mohammad Djeddour’s coffee shop Tassili next door, it’s practically invisible. Even though I had the address, I passed it twice before spotting the word “Zebda” (which is the French-Algerian word for butter) painted on a plate-glass storefront window.

Step inside and the perfume of cinnamon from flaky pastilla, or crepe-like pockets filled with curry chicken, flares your nostrils. The entire countertop is larded with glinting confections like orange flower water, honey and sesame-coated, flaky Ramadan cookies called Shebakia. There’s also a tray of diced curried fish and pepper pastillas and a generous pile of smoky, blistered, griddled, pita-like flatbread.

Move further down the line and you’ll find a huge glass case stuffed with stainless steel hotel pans filled with generous hunks of meat lacquered in beefy gravy. Next to that are tubs of pearlescent couscous, a rainbow assortment of salads and a hunk of cheese swaddled in roasted red pepper. Zebda is a bazaar for the senses masquerading as a humble deli.

Chef/Partner Katie Garcia has a knack for creating destination food businesses in unexpected places. Prior to Zebda, she ran Mundial Cocina Mestiza, a haute Frontera-like Mexican BYOB located in the heart of Pilsen. What I loved most about Mundial was its quirkiness. The food was good, but there were plenty of Rick Bayless disciples serving up Frontera Grill-type fare throughout the city. But, there was no other place in Chicago where you’d see folks drinking Grand Cru Champagne or Alsatian Riesling out of Dale Earnhardt Jr. signature ice buckets like they did at Mundial.

Zebda is also a touch quirky. On the day I visited, a young boy sat at a computer playing a Web-based whack-a-mole style game where you smash digital dogs on the head with a computer mouse arrow. While I waited for my order, he must have played ten games, working up a sweaty lather until he finally achieved his “second highest score of all time.” The kid also turned out to be quite the knowledgeable foodie pusher. He questioned my choice of pastilla, suggesting that the fish version was much better than the chicken. He confirmed that my shebakia cookies were “awesome” and made fun of my pronunciation when I ordered a bottle of Orangina. Leave it to a snickering little dude to teach you that the orange soda’s moniker didn’t rhyme with the word “angina.” Of course I don’t think that was the particular word he had in mind.

What’s especially exciting about Zebda is because it’s take-out only, and presumably lower overhead, the cost of huge sandwiches, wraps and salads runs only $5 or $6. You might be able to order one of everything on the entire menu for a crisp Ben Franklin and because everything is so good, you should. The cinnamon curry chicken pastilla is the greatest combination of sweet and savory since bacon and maple syrup. The slightly charred lamb brochette slathered in mint-garlic pesto is the epitome of summer bbq. Smoky grilled eggplant has magazine-centerfold food-porn-worthy cross-hatched grill marks and slides straight down your gullet. If there’s any criticism of the wraps, it’s that the flatbread underneath can get a little chewy if you don’t eat it quickly, but those are the breaks with takeout.

You better get over here soon, though, as Zebda won’t be low-key for long. Mundial was often packed to the gills, and was one of the few places that got even the most dilettantish North Side foodies to venture south of Roosevelt. Those same folks will likely come in droves to try out these tasty Algerian specialties. This time around however, Garcia’s talent is likely to attract a whole new contingent of faithful South Siders that she catered to at Mundial.

Katie was the heart and soul of Mundial and we enjoyed her delicious cooking there for years. We were so excited to see that she is again developing and serving fantastic food although in a new direction. We just got back from our first visit to Zebda and it is wonderful. We’ll be back often to see how her new venture develops and to enjoy her delicious food.