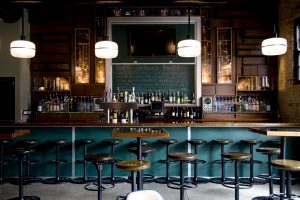 Entering Simone’s is likely to induce memories of walking through a summertime carnival funhouse. Gazing at a massive bar fashioned out of Fresnel lenses, bowling-alley remnants and pinball machines that have long since been forgotten can be disorienting at first, but still intriguing enough to keep wandering through to see what lies ahead in the next section.

When it came to designing Simone’s, which opened in Pilsen in February, the bar’s owners Russ and Desiree Grant and Michael Noone paired up with a design team from Salvage One to create a one-of-a-kind neighborhood bar. “We tried to repurpose items,” says Desiree Grant. “The whole idea of reusing and reducing, that was important to us. We knew that we did not want to bring a North Side-looking place down here; we wanted to respect the vibrancy of the community and the fact that it is an artist community. We wanted to celebrate that.”

Indeed they have, by outfitting Simone’s with everything from the aforementioned arcade trinkets to Malaysian pillars, a conveyor belt from the original Fannie May factory, WBBM’s executive-office doors and pieces from the New York City subway.

Simone’s also taps into Pilsen’s Second Fridays with an on-premise art gallery. Simone’s Lab, as it is called, is filled with chemistry sets, green boards and science-lab tables from Westinghouse High School in addition to a collection of art that changes every two months. “People finish with the galleries and then they seem to come over here,” Grant says. “We like that this was close enough to 18th Street so you could walk over to the arts district but that we were also close to the heart of Pilsen.”

Eclectic décor aside, the bar is also gaining notoriety for its impressive beer selection. Thirty beers are featured and change every three months to reflect the changing season. “Out of the thirty beers, twenty-eight of them are craft beers,” Grant says. “We’re gaining a reputation for being a good beer bar.” Some of the current selections on tap include Sprecher Hefeweizen, a vanilla-citrus wheat beer and Bear Republic Racer, a rosemary-citrus beer. For those who prefer domestic beer, bartender Michael Demitrus often recommends Metropolitan.

For the cocktail crowd, there are ten signature specialties including sangria, the Shirley Temple of Doom and the Peter’s Pickled Pepper. “We always tell people that [Peter’s Pickled Pepper] is Jalapeno-infused, so if you like that nice sort of spiciness, it’s a very interesting cocktail,” Grant says. Another cocktail that comes highly recommended is the aromatic Toy Gun, which features mango-flavored vodka, orange and basil. “It smells like a perfume, it’s such a great drink,” says Erica Schimmel, one of Simone’s managers. It’s also not uncommon for the bartenders to make use of the fresh mint, basil and cilantro that is grown on the bar’s rooftop garden. “The basil is used in the Toy Gun,” says Schimmel. “It’s always nice when [customers] see us come down with a handful of basil and walk over to the bar; that’s always fun.” (Katie Fanuko)