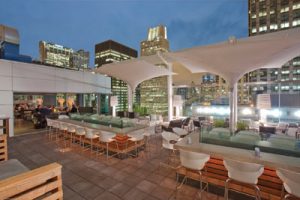 Home to two of the tallest buildings in America, Chicago is a skyward city. Like pigeons to lampposts, Chicagoans take to rooftops when summer comes around, as if our proximity to the sky will somehow enable us to glimpse the stars through that hazy orange veil of light pollution.

This past weekend, a few friends and I assailed the summits of the Wit and the Trump to see if two brand-spankin’-new rooftop bars measure up to the height and hype.

The Terrace on the sixteenth floor of the Trump Hotel & Tower has sailed on lofty aspirations since its June 24 debut. The space seats a scant seventy-five, and no reservations are taken, but the wait is short and swanky in the elegant Bridges Room. Once outside, guests are treated to an open terrace of bubbling zen fountains. Soft orange candles and the dazzling lights of the city provide the only illumination. Servers circle like retro flight attendants, wearing pencil skirts, Club Monaco belts and chic pink blouses designed by locals Anna Fong and Nicholas Joseph Custom Tailoring.

The clientele are what one might expect in a place bequeathed with a name like Trump. An upper-crust wedding party dominates the northern edge of the terrace. One of my companions gawks as a guest walks by; “That dude’s in a white suit! You can get away with it here. Nobody blinks an eye.” Meanwhile, I wonder what trust fund awaits a child in footie pajamas; he plays with his Transformer action figure while his parents receive rosé champagne bottle service.

We dine on succulent fare from executive chef Frank Brunacci: summer gnocchi with corn and tender crab meat, and a gourmet triad of chocolates. However, my vegetarian cohort is unimpressed with the limited selection (not a single entrée or appetizer is without meat). Because the kitchen closes at 10pm, our dessert is brought out early and reduced to three delicious puddles by the time we’ve finished munching on gnocchi. The least expensive thing on the menu is a $10 Heineken Lite.

The food, the drinks… nobody really cares and none of it actually matters. It’s all just garnish for bar’s golden egg: the view. 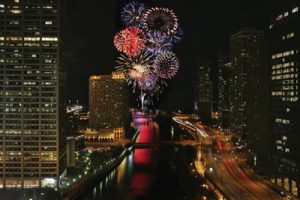 It is, unquestionably, the best rooftop view in the entire city. In one hour, we see a blood red moonrise over Lake Michigan, a bevy of midnight kayakers paddling down the Chicago River and the Navy Pier fireworks, which explode in front of us as if for our own personal pleasure. The Wrigley Tower is an arm’s stretch away; the gothic buttresses of the Tribune Tower blow us kisses. I linger after last call to take in this visual feast, because after seeing my bill, I’m pretty sure I will never be up here again.

Philipp Posch (serendipitously pronounced “posh”) is the Trump’s Director of Food and Beverage. “I’ve lived in eight different countries; I worked in South East Asia and I’m from Austria… I’ve seen my share of locations, and this is the best location in the world.” Unfortunately, with the season half over and beleaguered by torrential thunderstorms, many Chicagoans have not had a chance to see The Terrace’s view. “The weather has not been kind to us this summer.”

Posch says The Terrace steers clear of the high-energy, club-like vibe found at other rooftops in the city. “Most of the outdoor terraces available nowadays are very crammed, elbow to elbow.”

Josh Kaplan, the Manager of Food and Beverage at the Wit Hotel, just across the river, sees that as a positive. “When you have more people in a space, it creates a different energy.” That energy is evident at ROOF, on the twenty-seventh floor. ROOF opened on May 28; it holds a capacity of 300 and sees triple that number on any given Friday night.

“We’ve become the IT place of the summer,” says manager Arman Razavi, and the wait downstairs attests to it. The line at the corner of State and Lake is long and chained by velvet ropes; rumors circulate that the entourages of NFL and/or NBA players managed to bypass the queue. A few courageous couples attempt to wheel and deal the gatekeepers, but are rebuffed.

Once upstairs, guests are greeted by DJ Frank Solano’s deep house, downtempo beats and a moist, Miami atmosphere of hipsters, scenesters and tourists. Sheets of glass gaze upon the Chicago Theatre and the Smurfit-Stone Building (though its iconic diamond faces in the opposite direction).

A menu crafted by executive chef Todd Stein hits a homerun. A plate of roasted artichokes with fonduta and almonds is more than reasonable at $12, as is an off-menu oven-roasted pizza, which sizzles with mushrooms and perfectly melted goat cheese. Unfortunately, the drinks are hit and miss. I order an excellent Urbanite cocktail that re-educates me on the virtues of gin, but the Captain Johnny tastes like Robitussin. Meanwhile, my cohort approves of our sprightly server; “That girl is so cute. Alanna…” he sighs. “I have no chance with her.”

We in the city are upwardly mobile, both physically and socially. Our buildings are tall, and so are our social orders. Yet Chicago’s ostentatious rooftop terraces only marginally impress one particular guest, my friend’s mother, Sue Chapman, who is in town from Gilbert, Arizona. “We don’t have skyscrapers in Arizona,” she concedes, sipping her Bud Light with a smile. “We have mountains.”