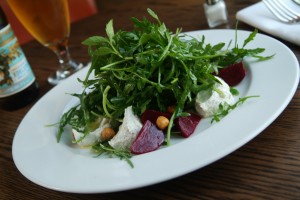 When Jason Hammel describes his experience of opening Nightwood in Pilsen, he draws similarities to being the new kid in town. “It’s a process to get introduced to a neighborhood and the people here,” he says. “To be a newcomer is not easy, it’s like the first day of school for us.” Yet in terms of popularity, this summer has proven that Nightwood is poised to become one of the neighborhood’s favorite upscale haunts.

The restaurant/bar has been garnering attention since its opening in late May, which is no surprise considering that it is the latest venture for Hammel and his wife Amalea Tshilds, the duo behind Logan Square’s Lula Café. They teamed up with Matt Eisler—owner of Empire Liquors, Bar Deville and Angels and Kings—and Kevin Heisner to create the minimalist space within Pilsen’s gallery district. “We had been looking here for a while; I think that it is a unique neighborhood,” Hammel says. “There are a lot of artists that live here, a lot of young people that are doing creative things. There is a geographic otherness in the same sense that Logan Square feels cut off from the rest of Chicago and I like that about it.”

Coincidentally, Nightwood’s design can invoke a sense of seclusion as well, especially when it comes to the outdoor patio. Even though the patio is right off of Halsted, the metal walls and roof shield diners from outside noise, creating a much more peaceful al fresco experience. “It’s cool because it’s private and there aren’t a lot of hidden alcoves like that in the city,” Hammel says. “You’re not on the sidewalk and you’re not exposed to traffic or noise. I think it’s the perfect little place to enjoy summery food.”

The patio’s spacious design incorporates sleek elements like minimalist furniture and wooden bench-style seating. “We wanted it to have a private garden feel—even though it is a concrete garden,” Hammel says. “We wanted to do something that was minimalist but still pretty. There isn’t any wrought-iron furniture or your mom’s deck elements out there so it’s pretty slick.”

Nightwood’s menu revolves around seasonal produce and changes daily. The menu is also hand-written each morning. “The idea is the matron in the French Bistro writing out the menu by hand every day,” Hammel says. “Our general manager does the handwriting; she has gorgeous calligraphic handwriting and she does it every day after the menu is finished.” The menu is then scanned and printed in bulk.

In addition to the daily menu, the seasonal element also applies to the cocktails. Many of the drinks include fresh fruit and fruit syrups that are made on premise. “We are big proponents of preserving fruits,” Hammel says. “That translates into cocktail land because you can do your own cherries and stone-fruit drinks. The peach Bellinis actually have peaches from a local farm.” Although they are still in the process of creating a signature drink list, the Rose City comes highly recommended.

Though Hammel named Nightwood after Djuna Barnes’ novel, he feels that the restaurant’s name has a deeper meaning. “It’s also the idea of coming down the street at night and it’s kind of an industrial area and seeing the place kind of glow like an ember on the street corner.” (Katie Fanuko)