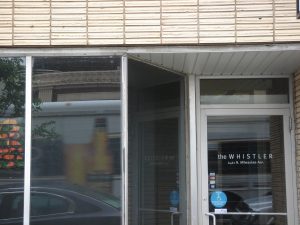 Two bars, nestled directly across the street from one another at the intersection of Milwaukee and Fullerton in Logan Square, offer quick indications of clientele even from just a cursory glance outside—The Whistler, on the north, is glittered with an assortment of fixed-gears, and the Two Way Lounge, on the south, rattles and rumbles with the sound of gathered motorcycles. Thirty feet across from one another and a whole world in between.

You know The Whistler. You know the place. The new art hangout, just opened last year, a joint easily tagged with a hipster label though you most likely wouldn’t hear that term thrown around inside. In summer, the bar shines. Not much bigger than your father’s basement, the inside of the tavern gives way to a larger outdoor smoking patio in back—though that’s not much bigger than your father’s backyard, either.

Inside, it’s chic and glorious, a booze boutique more than a local watering hole. Candlelit, walls adorned with mirrors, the stage that holds nightly live music sits silent and in wait. The between-set music oozing from the speakers is some somber cover of “California Dreamin’.” Girls drink cocktails—a summer-drink list offers concoctions with titles like “Diablo,” “Beretta,” “Sibling Rivalry”—most guys do cans of PBR. Hipster attire in full passive-aggressive force; one nautically adventurous fella is seemingly dressed as Gilligan. The room whispers in melancholic tones.

Outside, an overcast sky does wonders with the white Christmas lights strung along the yard’s protective privacy fences. All tables taken, a group of young’uns plops to the cement. Everyone smokes. The wind whistles, sure. This is the place until there is a new place.

Cross Milwaukee Avenue, avoid the men straddling their two-wheeled jets, enter Two Way and get blasted by an overloud “Hells Bells” from overhead. Old Style, dollar-draft night, frosted mugs. Summer special. Locals curled at the bar; an elderly man watching the homerun derby, an African-American woman dancing at her stool, a bellied middle-ager clapping to steer her along. Pool in the back, a clamor of cues. An implied steam rises from the floor. If The Whistler is a private pool, this is the raging sea. An intimidating American flag hangs to the right of the behind-the-bar TV; two tables of Logan transplants in indie-rock shirts and perfect jeans goof with the jukebox and chug the six-dollar pitchers. Two Way’s Yelp page calls these types “immigrants.” Bukowski must be in the pisser.

Lots of ballcaps and sweat. Got to get out of that stinking, oppressive July house. Bandana-donning bikers dominate the front of the bar in a jolly mood—one boasts a heavy-duty “RIDERS” tat on his tricep, one wears a long-sleeve T highlighting a remarkable phrase: “If you see da’ police, warn a brother.”

Summertime and good spirits. The jukebox mixes up hip-hop, Aerosmith, country. The Whistler, Two Way, a Jekyll, a Hyde. The Whistler group that took refuge on the patio floor enter the bar and summon a pitcher.

Zac Brown Band’s patriotic “Chicken Fried” blasts and the room widens its eyes. A couple does a line-dance jig in the middle of the floor. The bikers drink straight from pitchers and know all the words, howling at the moon. “Salute the ones who died / The ones that give their lives so we don’t have to sacrifice / The things we love—”