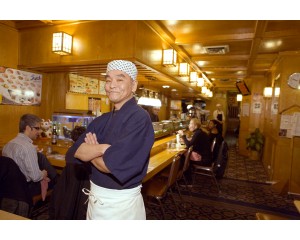 At ten o’clock each night, Akira Yokoyama phones three fish importers and orders seafood from around the world. Most of it will be flown in fresh by noon the next day. Nothing is more important to a sushi restaurant than fresh seafood.

Akira grew up in Tsuruoka, on the northwest coast of Japan’s main island facing the Sea of Japan, where for hundreds of years fresh fish has been the staple food. He can tell you the habits of each fish and shellfish, and describe the evolution of sushi over the past 1,400 years.

He bought the Ginza restaurant in downtown Chicago twenty years ago and has been painstakingly preparing the food six days a week ever since. The restaurant is plain-looking, like a typical one in Japan, tucked into the first floor of the Tokyo Hotel at 19 East Ohio. Akira expresses his art in the creation and presentation of each dish. There is an ancient Japanese tradition that food should be visually pleasing, sweet smelling and delicious. Akira follows that formula assiduously.

There are many good traditional sushi restaurants in Chicago, including Naniwa on Wells Street, and Katsu on Peterson, but Japanese expatriates testify that Ginza has the very best sushi in town. Consider how Akira prepares the rice that will encircle the fresh fish. Each chef has his own formula, Akira says, and his includes flavoring the rice with rice vinegar, salt, sugar and a touch of saki. Thin stips of dried kelp are soaked in the vinegar for over a week to lend its delicate flavor. Akira is dismissive of restaurants that use pre-mixed vinegar, and horrified that some restaurants use machines to churn out their sushi. He uses only the highest quality nori, the dried seaweed that surrounds the rice and seafood.

As in all traditional Japanese restaurants, you will never be served one or three sushi, as the words in Japanese have bad connotations. “One is not enough, and two is just right,” Akira says. Tradition is most important to the Japanese, even though it is a highly industrialized modern nation. Now a constitutional monarchy, emperor Akihito is the symbol of Japanese unity and the highest authority of the Shinto religion. He is said to be the direct descendent of the first emperor, Jimmu, who was born in 660 B.C.

We sampled the shrimp, mackerel and octopus sushi, and the spicy tuna roll. Delightful. The special that day was Monk Fish liver, from Boston Bay, soaked and then steamed with saki for two hours. As fine as the best French pate.

My friend Shigeyo Kawabata ordered from the Japanese menu, intended primarily as snacks while drinking saki and beer. There was Hamachi Shioyaki (salted and grilled yellow tail section, and my favorite), Takono Negi (steamed octopus with scallions and onion), Beef Tataki (thin slices of raw beef charred at the edges), and Tofu soup, with green vegetables and shaved dried fish. Shigeyo favored this final dish, with its thick homemade buckwheat noodles.

Akira learned his craft from a master chef in Tokyo thirty-five years ago, and is training his apprentice in turn. He showed us a chart detailing the evolution of sushi, from the year 586, when the rice was placed inside the fresh fish. Akira left Tsuruoka to study English literature at Wasseda University in Tokyo, and then worked in a sushi restaurant in Hatano, in the Kanagawa prefecture, famed for the 1854 treaty negotiated with Commodore Mathew Perry which began the process of opening trade with the outside world. Akira then worked in restaurants in New York and Schiller Park before saving enough to buy the Ginza restaurant.

He lives with his wife in Mount Prospect, where they raised two sons now living in Japan. Every other year they visit relatives back home. He generally prefers French movies to American, and one of his favorite directors is Francois Truffaut. I mentioned that he shared his first name with famed director Akira Kurasawa, and we talked a little about “Rashomon,” which tells the same dramatic story with three conflicting eye-witness accounts, and “Kagemusha,” which was Kurasawa’s response to Tolstoy’s “War and Peace.” Akira said he would add director Nagisa Ohsima to his favorites.

On the restaurant wall are pictures of Akira with Shozo Sato and cast members from “Kabuki Lady Macbeth,” which played at the Shakespeare Theater in 2005 to rave reviews. The Tribune critic called it “magical.” Akira has been friends with Sato, the director and former University of Illinois professor, for some twenty-five years. Sato’s favorite dish is sushi omakase, which contains the freshest fish.

I look forward to Christopher Chandler’s reviews. His unique literary approach mixes food reviews with history, culture and biographical material. I haven’t seen such an approach anywhere else and I am read many reviews.