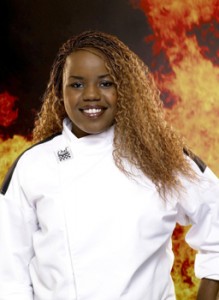 Jennifer Gavin is now the “Master of the Market.” She has cooked her way to victory at the Chef Challenge, beating out the other contestants with sweet corn slaw, grilled vegetable sandwich on tomato focaccia and lemon pound cake with raspberry preserves.

This year’s contestants in the third annual event, held at the Daley Plaza Farmers Market—all female for the first time—include Radhika Desai, a season five contestant on “Top Chef,” and Heather Terhune, executive chef at Atwood Café. Jennifer Gavin finished fourth on “Hell’s Kitchen” in 2008 and is now executive chef and owner of Catered Excellence. Her father was a chef, so she began cooking at 15 and attended culinary school in Chicago.

“I’m very competitive by nature,” she says. She wants to make “something creative, something innovative, that people haven’t seen before, and just really try to wow people.”

The women have thirty minutes to shop the market—spending up to $50 among the various fruits, vegetables, breads, salsas, honeys, cheeses and pastries, and then thirty minutes to prepare a meal with only ingredients from the market. While they shop, a mariachi band entertains the crowd.

Among the crowd is Laura Jean Nalepka, a self-proclaimed “addicted foodie.” She says she schedules court on Thursdays so she can go to the Farmers Market and found out about the competition while browsing today. “I love cooking shows, love cooking competitions,” she says.

Once thirty minutes are up, the chefs head back to their stations with their loot. Terhune has purchased a two-pound block of butter. Provided with a hot plate, pans, bowls and various utensils, they begin to cook. Mirrors over their stations allow the audience to watch their progress.

Marnie Pierce is visiting Chicago from Michigan with her son. The two “were just looking for something to do.” They watch Top Chef, and Rad was “one of our favorites,” so they’re watching the contest before checking out the Art Institute.

Another thirty minutes and each chef has readied three plates of food, artfully arranged to please the panel. Jackie Tranchida, a Metromix reporter, Steve Baskerville, CBS 2 meteorologist, and Rob Gardner, editor of The Local Beet, judge the dishes on theme, taste, adaptability, creativity and presentation.

The judges applaud Gavin for creating a three-course meal in just half an hour. “It’s a meal, I’m not missing anything,” says Tranchida. “It’s hearty and I feel full, but it’s a light dish.”

“I’m a meat eater, but I don’t miss the meat,” Baskerville says of the sandwich.

Audience members ask about Gavin’s ingredients and how she picked. She says she studied in France and Belgium, where she shopped fresh ingredients daily and often used raw produce. Here, she tried a raw sweet corn sample, “and I was speechless. I was sold.” (Amy Brachmann)