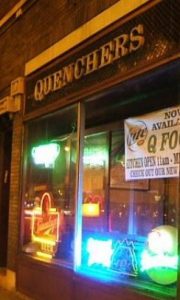 Before Goose Island was even a brewery, Quenchers Saloon was doing the “beer thing,” offering Chicagoans an impressive variety of fermented refreshments. Started in 1979, the bar is now throwing a massive thirtieth-anniversary celebration, from August 16-23. The week-long event will provide attendees with a lot of beer, and a lot of music. “We have three events that we’re focusing on,” says Steve Segel, the bar’s manager. Besides a slew of giveaways and prizes, and a possible vertical beer-tasting to be announced, there’s a bluegrass jam session Saturday afternoon and a rock show on Saturday night. The rock show will include The Lovers, The Amino Acids, The Runnies and The Livers. “The Livers do a great audio video setup behind them,” says Segel. “I’ve seen a lot of shows but this really blew my mind.”