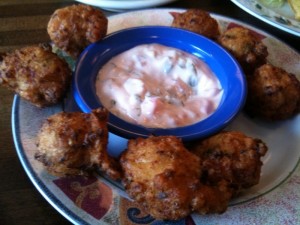 There are times I’m primed to make fun of a restaurant. I’m not indulging in some twisted unprofessionalism, just human nature. I know if I told you I was going to a place that serves Caribbean, Creole and Southern food in a tin-roofed faux-island-style shanty outfitted with a Pier One’s worth of wicker and kitschy wall-mounted bric-a-brac including taxidermied fish and vintage soda company advertising, you’d probably respond, “I didn’t know TGI Friday’s launched a Jamaican specialty menu.”

But this is no national chain once vilified for its alleged flair policies in the movie “Office Space.” It is actually a restaurant lauded by a President of the United States. And, no, it’s not George W, who as we know was fond of burritos as big as his head (metaphorically speaking that would likely be a world-record-sized burrito), but, Barack Obama. Calypso Café is, according to a New Yorker article, his favorite place to eat in Hyde Park.

This may seem like a ringing endorsement. However, while our Commander-in-Chief has been a steadfast beacon for the “audacity of hope,” he’s also been a Clintonesque philanderer when it comes to restaurant commitment. His “favorite” places have also included, at one time or another, Spiaggia, Topolobampo, MacArthur’s and Calypso’s defunct sister restaurant Dixie Kitchen. It seems in Obama’s world, his favorite restaurant “depends on what the meaning of the word ‘is’ is.”

The only way to really settle things was to visit myself. Actually, I already had years ago, and was left only with the memory of dry fish. I’d likely never go back, but two things happened, one of them “magical.”

The first is that sister spot Dixie Kitchen, purveyor of swampy rich gumbos, closed, and so Calypso recently remodeled half of their dining room in the old Dixie Kitchen bait-shop aesthetic and started serving the best Dixie menu items alongside their jerk chicken.

The second “magical” thing is that I got roped into checking out the Harry Potter exhibit at the Museum of Science and Industry. Actually, the only thing magical about the experience is that they somehow got me to part with twenty-five bucks to listen to docents with bad fake British accents and to check out second-rate Quidditch (it’s like wizard soccer on broomsticks) movie props and Robert Pattinson’s and Daniel Radcliffe’s screen wardrobes.

The exhibit wasn’t even held in the museum proper, but in a fancy air-conditioned big-top tent on the grounds. I don’t know for sure, but I can only imagine the museum curators arguing about the “scientific” and “industrial” rigor of a Harry Potter exhibit. Hosting in a tent off-site may have been the only reasonable compromise. Though, to be fair, the whole thing may have been a total fantasia if I were a 13-year-old girl.

Wallet besmirched, I had no stomach for the prices in the museum’s Brain Food Court (since when is pizza brain food?) and figured (after suppressing my dream of a Medici Bakery Garbage burger) it would be better to check out the newly remodeled Calypso Cafe.

As I stepped into the foyer, pangs of regret coursed through me, as I spotted an Island Oasis drink machine. Island Oasis is a purveyor of cloying shelf-stable drink mixes that can be stored unopened at room temperature for incredible amounts of time. Island Oasis is not the friend of the craft cocktail movement.

Kitschy or not, the décor here is actually transformative and made me forget about the drink machine. Sitting in the elevated pier-like setting of the Harper’s Court shopping center in wicker chairs under potted palms drinking a Mai Tai made me want to do a Junkanoo boogie. Actually, I have no idea what a Junkanoo is, except I remembered the word from an old beach trip. But aptly, it turns out it’s a parade celebrating Bahamian music and dance.

I don’t know if it was the booze, but I decided to live dangerously and checked out both the Caribbean and Cajun offerings. The Obama-favored johnnycakes were no longer complimentary as they were in the Dixie Kitchen days, but at $1.95, the fluffy pile of golden caramelized pancakes casting off sweet puffs of corn perfume might be one of the tastiest deals in Chicago.

Red beans and rice weren’t as porky or smoky as I might have preferred, but the creamy brew was well cooked.

Ditto for the briny oysters on the richness-cutting lime-cilantro-mayo-dressed po-boy, a nice departure from the usual hot-sauce-slathered version. Some might quibble that the softer bread used here isn’t akin to the authentic Gendusa buns used in New Orleans, but you’re probably better keeping those folks out of your life.

My meal was shockingly good. Rare is the meal, even at the four-star level that’s seasoned, cooked and served so consistently. The Dixie items recalled one of my top meals at my favorite Cajun/Creole spot Lagniappe. I don’t know that Hyde Park’s really ever had a destination restaurant, but with the dearth of general Cajun/Creole offerings in the city, and good Caribbean nosh north of 79th Street, Calypso Café might be its first.